Janet Gladys Kidd married William Montagu. We may be kin.

Janet, born in 1908 in Halifax, was the daughter of business tycoon and press baron Lord Beaverbrook.[1]

She was the daughter of Sir William Maxwell Aitken, 1st Baron Beaverbrook and Gladys Henderson Drury

The grave plaque is in front and to the right of the grave of Gladys, Lady Beaverbrook. The inscription reads: “In memory, Janet Gladys Kidd, 1908-1988. Known with love to her friends and family as Bodie.” 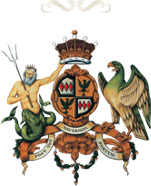 Coat of arms of the Earls of Sandwich

George John Montagu, 6th Earl of Sandwich (4 February 1773 – 21 May 1818) was the son of John Montagu, 5th Earl of Sandwich and Lady Mary Henrietta Powlett. He was styled Viscount Hinchingbrooke from 1790 until in 1814 when, his elder half-brother having died, he inherited the earldom from his father, together with the Hinchingbrooke estate in Huntingdonshire. He was educated at Eton School {1780-90) and Trinity College, Cambridge (1790-92). [1]

He married in 1804 Lady Louisa Mary Ann Julia Harriet Lowry-Corry, daughter of Armar Lowry-Corry, 1st Earl Belmore and Lady Harriet Hobart. Together they had two daughters and one son, John William, who would succeed his father in the earldom: