The Wilsons were Baron Berners. At this time I do not know if they are my kin. 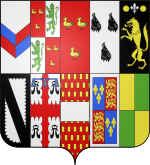 The barony was created in 1455 for Sir John Bourchier, youngest son of William Bourchier, 1st Count of Eu, and younger brother of Henry Bourchier, 1st Earl of Essex and of William Bourchier, 9th Baron FitzWarin (from whom the Bourchier Earls of Bath descended). He married Margery Berners, daughter of Sir Richard Berners. The peerage is so ancient as to have been established by writ, and thus can descend through both male and female lines (in the absence of an official grant of remainder). He was succeeded by his grandson John Bourchier, 2nd Baron Berners, who served as Chancellor of the Exchequer between 1516 and 1527 and is well known in literature as Lord Berners, having made a well-regarded English translation of Froissart’s Chronicles.

Arms of Knyvett: Argent, a bend sable a bordure engrailed of the last

He died without male progeny and was thus succeeded by his daughter Jane Bourchier, wife of Sir Edmund Knyvett and de jure 3rd Baroness Berners, although she never assumed the title. Her grandson Thomas Knyvett, the de jure 4th Baron, received a writ of summons in this title but died before obtaining the King’s confirmation. His great-great-grandson Sir Thomas Knyvett, the de jure 7th Baron Berners, sat as a Member of Parliament for Dunwich and Eyre. On his death in 1693 the peerage fell into abeyance between his two sisters, Elizabeth Knyvett, wife of Sir Thomas Glemham, and Katherine Knyvett, wife firstly of John Harris and secondly of Richard Bokenham.

The barony by writ of summons remained in abeyance until 1711, when, on the death of Sir Thomas Glenham, only child of Elizabeth Glenham (see above), the peerage title devolved on the aforementioned Katherine Bokenham, who became the de jure eighth holder.

In 1720 she was confirmed by the House of Lords as 8th Baroness Berners. However, on her death in 1743 the barony again fell into abeyance, this time between the heirs of the sisters Elizabeth Knyvett (wife of Henry Wilson) and Lucy Knyvett (wife firstly of Thomas Holt and secondly of John Field), both great-granddaughters of Thomas Knyvett, younger brother of John Knyvett, 6th Baron Berners. This time the peerage remained in abeyance for 89 years, until the abeyance was terminated in 1832 in favour of Robert Wilson, who became the ninth Baron. He was the grandson of Elizabeth Knyvett. He was succeeded by his younger brother, the tenth Baron. When he died the title passed to his son, the eleventh Baron.

He died childless and was succeeded by his niece Harriet Tyrwhitt, the twelfth Baroness. She was the daughter of Hon. Robert Wilson, younger son of the tenth Baron, and wife of Sir Henry Thomas Tyrwhitt, 3rd Baronet (see below for earlier history of this title). She was succeeded by her son, the thirteenth Baron. In 1892 he assumed by Royal Licence the additional surname of Wilson and in 1894 succeeded his father as the fourth baronet, of Stanley Hall; he did not marry and was succeeded by his nephew, the fourteenth Baron, a writer, painter and composer of classical music. He also never married and on his death in 1950 the baronetcy became extinct.

The Tyrwhitt baronetcy, of Stanley Hall in the County of Shropshire, was created in the Baronetage of the United Kingdom on 3 October 1808 for Thomas Tyrwhitt Jones. He represented Weymouth and Melcombe Regis, Denbigh Boroughs, Athlone and Shrewsbury in the House of Commons. Born Thomas Tyrwhitt, he assumed by Royal Licence the additional surname of Jones in 1790. His son, the second baronet, was High Sheriff of Shropshire in 1816 and sat as a Member of Parliament for Bridgnorth (1818–1820). He was succeeded by his son, the aforementioned Sir Henry Thomas Tyrwhitt, 3rd Baronet, who married Harriet Wilson, 12th Baroness Berners. Their son Raymond Robert Tyrwhitt-Wilson succeeded in both the baronetcy and barony.

Succession of the Berners barony[edit] 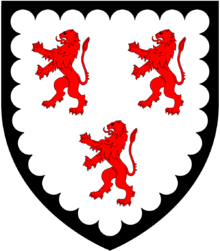 Arms of Kirkham, borne by the present heir apparent to the barony of Berners: Argent, three lions rampant gules a bordure engrailed sable[2]

However, he was succeeded in the barony of Berners by his first cousin Vera Ruby Tyrwhitt (1901-1992) (daughter of Hon. Rupert Tyrwhitt, fifth son of the 12th Baroness), who became the 15th Baroness Berners and married Harold Williams (d.1971). On her death in 1992 the barony again fell into abeyance between her two daughters, namely Hon. Pamela Vivien Williams, the eldest, wife of Michael Joseph Sperry Kirkham, and Hon. Rosemary Tyrwhitt Williams, wife of Kelvin Alexander Pollock. In 1995 the abeyance was terminated in favour of the elder daughter, Pamela Vivien Kirkham, the 16th and present holder of the title in 2017.

Berners was born in Apley Hall, Shropshire, in 1883, son of The Honorable Hugh Tyrwhitt (1856-1907) and his wife Julia (1861-1931), daughter of William Orme Foster, Apley’s owner.[2] His father, a Royal Navy officer,[3] was rarely home. He was brought up by a grandmother who was extremely religious[4] and self-righteous, and a mother who had little intellect and many prejudices. His mother, a wealthy ironmaster’s daughter with a strong interest in fox hunting,[5] ignored his musical interests and instead focused on developing his masculinity, a trait Berners found to be inherently unnatural. Berners later wrote, “My father was worldly, cynical, intolerant of any kind of inferiority, reserved and self-possessed. My mother was unworldly, naïve, impulsive and undecided, and in my father’s presence she was always at her worst”.[6]

The eccentricities Berners displayed started early in life. Once, upon hearing that you could teach a dog to swim by throwing him into water, the young Gerald promptly decided that by throwing his mother’s dog out the window, he could teach it to fly. The dog was unharmed, though the act earned Berners a beating.

After devising several booby traps, Berners was sent off to the boarding school Cheam School at the age of nine. It was here that he would first explore his homosexuality; for a short time, he was romantically involved with an older pupil. The relationship was abruptly ended after Berners vomited on the other boy.

After he left prep school, Gerald continued his education at Eton College. Later, in his autobiographies, Berners would reflect on his experiences at Eton, claiming that he had learned nothing while there, and that the school was more concerned with shaping the young men’s characters than supplying them with an education.

In 1918, Berners became the 14th Baron Berners after inheriting the title, property, and money, from an uncle.[7][8] His inheritance included Faringdon House, which he initially gave to his mother and her second husband; on their deaths in 1931 he moved into the house himself.[9] In 1932, Berners fell in love with Robert Heber-Percy, 28 years his junior, who became his companion and moved into Faringdon House.[10] Unexpectedly, Heber-Percy married a 21-year-old woman, Jennifer Fry, who had a baby nine months later. For a short time, she and the baby lived at Faringdon House with Heber-Percy and Berners.[11]

As well as being a talented musician, Berners was a skilled artist and writer. He appears in many books and biographies of the period, notably portrayed as Lord Merlin in Nancy Mitford‘s The Pursuit of Love.[12] In January 2016, he was played by actor Christopher Godwin in episode 3 of the BBC Radio 4 drama What England Owes.[13] He was a friend of the Mitford family and close to Diana Guinness.

Berners was notorious for his eccentricity,[14] dyeing pigeons at his house in Faringdon in vibrant colours and at one point entertaining Penelope Betjeman’s horse Moti to tea.[7] There were paper flowers in the garden and the interior of the house was adorned with joke books and joke notices, such as “Mangling Done Here”. As visitor Patrick Leigh Fermor recalled:

“No dogs admitted” at the top of the stairs and “Prepare to meet thy God” painted inside a wardrobe. When people complimented him on his delicious peaches he would say “Yes, they are ham-fed”. And he used to put Woolworth pearl necklaces round his dogs’ necks [Berners had a dalmatian, Heber Percy the retriever, Pansy Lamb] and when a guest, rather perturbed, ran up saying “Fido has lost his necklace”, G said, “Oh dear, I’ll have to get another out of the safe.”[14]

His Rolls-Royce automobile contained a small clavichord keyboard which could be stored beneath the front seat. Near his house he had a 100-foot viewing tower, Faringdon Folly, constructed as a birthday present in 1935 for Heber-Percy,[15] a notice at the entrance reading: “Members of the Public committing suicide from this tower do so at their own risk”.[16] Berners also drove around his estate wearing a pig’s-head mask to frighten the locals.[4][12]

He was also subject throughout his life to periods of depression which became more pronounced during the Second World War, and following the production of his last ballet production Les Sirènes he lost his eyesight.[17]

He died in 1950 aged 66 at Faringdon House, bequeathing his estate to his companion Robert (‘Mad Boy’) Heber-Percy, 28 years younger than himself,[7] who lived at Faringdon until his own death in 1987.[18] His ashes are buried in the lawn near the house.[19]

Berners wrote his own epitaph, which appears on his gravestone:

“Here lies Lord Berners
One of the learners
His great love of learning
May earn him a burning
But, Praise the Lord!
He seldom was bored.”

Berners’ musical works included Trois morceaux, Fantaisie espagnole (1919), Fugue in C minor (1924), and several ballets, including The Triumph of Neptune (1926) (based on a story by Sacheverell Sitwell) and Luna Park (1930). In his period at the British embassy in Rome during World War I he composed avant-garde piano music and several song cycles and later ballets and film scores, notably the 1947 feature Nicholas Nickleby.

Berners himself once said that he would have been a better composer if he had accepted fewer lunch invitations. But English composer Gavin Bryars, quoted in Peter Dickinson’s biography of Berners, disagrees saying: “If he had spent more time on his music he could have become a duller composer”.[4] Dinah Birch, reviewing The Mad Boy, Lord Berners, My Grandmother and Me, a biography of Berners written by Robert’s granddaughter, Sofka Zinovieff, concurs saying: “Had he committed himself to composition as his life’s work, perhaps his legacy would have been more substantial. But his music might have been less innovative, for its amateur quality — ‘amateur in the best sense’, as Stravinsky insisted — is inseparable from its distinctive flair”.[12]

Berners was the subject of BBC Radio 3’s long-running Composer of the Week programme in December 2014.[20]

Berners wrote four autobiographical works and some novels, mostly of a humorous nature. All were published and some went into translations. His autobiographies First Childhood (1934), A Distant Prospect (1945), The Château de Résenlieu (published posthumously)[21] and Dresden are both witty and affectionate.[according to whom?]

Berners obtained some notoriety for his roman à clef The Girls of Radcliff Hall (punning on the name of the famous lesbian writer), initially published privately under the pseudonym “Adela Quebec”,[22] in which he depicts himself and his circle of friends, such as Cecil Beaton and Oliver Messel, as members of a girls’ school. This frivolous satire, which was privately published and distributed, had a modish success in the 1930s. The original edition is rare; rumour has it that Beaton was responsible for gathering most of the already scarce copies of the book and destroying them.[23] However, the book was reprinted in 2000 with the help of Dorothy Lygon.[24]

His other novels, including Romance of a Nose, Count Omega and The Camel are a mixture of whimsy and gentle satire. 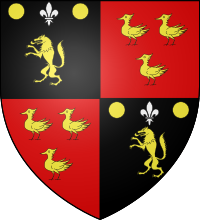