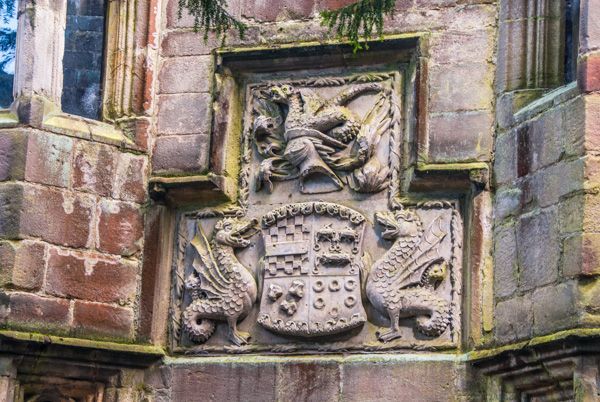 My late friend, Ben Toney descends from the Toney family who married a Clifford, and begat Rosamond Clifford, who is in my family tree, along with the Bentons. So is Elizabeth Rosemond Taylor.

Here is the line from  Abigail Shakespeare Webb to Reverend Wilson. Our literary fame surpasses our artistic fame. Royal Rosamond is amazed by this lineage from Writer’s Heaven. The muses have been good to us. We are Boston Bluebloods. This line is spliced to Rosamond Clifford and the Culpepers.

<https://archive.org/stream/historyoftownofh02dowj#page/638/mode/2up> “George Clifford, descended in direct line from the ancient and noble family of Clifford, in England, came, probably with his wife (Elizabeth?) and son John, from Arnold village and parish in Nottingham Co., England, to Boston in 1644; was a member the Ancient and Honorable Artillery Company.; moved to Hampton.”

The above excerpt is found also here, albeit with more detail: <http://www.whatreallyhappened.com/WRHARTICLES/pearl/www.geocities.com/Pentagon/6315/family/clifford.html> “CLIFFORDS Drogo fitz Ponts’ son Walter fitz Richard fitz Ponts in 1138 married a descendent of Ralph de Todeni who brought with her the dowry of Clifford Castle. Walter then changed his name to Clifford. Walter de Clifford’s daughter Rosamund Clifford (born about 1139 died 1176) was the mistress of Henry II and had a child by him. A novel concerning this is: The Fall of Rosamund Clifford by Thomas Hull. The King kept her in a wooden maze and the legend is that Queen Eleanor found her by means of a clue – a silk thread. The legend further says that the Queen then offered her poison in a chalice, but in fact she stabbed her to death in her bath. Robert de Clifford, born 1274, became the first Lord of Skipton Castle and died in a battle with the Scots in 1314. His son was to be decapitated on orders of the King, but was too ill. After a month, when he was well enough, King Edward III changed his mind and let him live. Thomas, the 8th Lord Clifford, has several speeches in Shakespeare’s “Henry the VI” part III, and was written about by Wordsworth. Henry, the 10th Lord Clifford, was to be executed during the War of the Roses but his mother had him raised by a shepherd. When the Lancasters won 25 years later, he was re- instated with 4 castles. He is the subject of the ” Ballad of the Nut-Brown Maid ” (1505) which tells how the maid rejected him, not knowing that he was a lord. The best speculation of whom George Clifford, first in America, descended from is that Henry, The Shepherd Lord. Henry, born 1493, was not only the 11th Lord Clifford but also the 1st Earl of Cumberland. Henry, the 12th Lord Clifford, was sickly and at one point was mistaken for dead and about to be buried, when someone noticed he was breathing. George, the 13th Lord Clifford and 3rd Earl of Cumberland, was a pirate whose 3 expeditions were backed by Queen Elizabeth. Although he plundered many Spanish ships, he managed to deplete the Clifford estates (restored later by his brother Lord Francis). He was Elizabeth’s champion at jousts and wore her glove on his helmet. He died in 1605.The 1st Clifford in America was George Clifford of the parish of Arnold in Nottingham. It is a family tradition and claim from the earliest times that he is a direct descendant of the Lords of Skipton and therefore an indirect relative of the current Lord Cliffords. There are no records of George Clifford in Arnold. In 1643 he settled in Boston and became a church member, official drummer-workman, and in 1644 he was a member the Ancient and Honorable Artillery Company.

John, born 1614, was baptized May 10, 1646 “a man grown”. There is a record of a J. Clifford in 1639 in Salisbury, MASS. He was a planter (farmer) and butcher (and glover?) whose family homestead was South of the Taylor River on the west side of Old Mill Road in Hampton Falls, Rockingham Co., N.H. There are no buildings left standing. He was a selectman in 1660 and died in 1694. His great-great- great grandson, Hon. John H. Clifford, was attorney-general and governor of Massachusetts as well as president of Harvard College and the Boston & Providence Railroad Co. The Clifford household was itself extremely complex, for John had been married twice previously, and his current wife, Bridget, at least once; moreover, there were children from all of their earlier unions. As of 1672 the Clifford menage comprised the following persons:

Meanwhile, John Clifford, junior (son of John and his first wife), was living in the next house, with his bride of two years, Sarah [Godfrey] Clifford.

The family was composed of thirteen persons, including eleven children with four different surnames. To be sure, fosterage was not uncommon in early New England; more than a few families were rearranged by the death of one spouse, and the remarriage of the other. But the complexity of the Clifford household was extreme.

Israel Cliford was born in Hampton 15 April 1647, married Ann Smith March 5, 1680. Ann Smith was the alleged victim of Goody Cole’s witchcraft-see Whittier’s poem, ” The Wreck of the Rivermouth “. In October 1672 Goody Cole was arraigned for “appearing under various forms, as a woman, a dog, an eagle and a cat, to entice a young girl, named Ann Smith, to live with her.” Cole, who had previously been jailed 15 years for witchcraft, was acquitted. Isaac, born May 24, 1696, in Hampton was a tax collector and constable at Kingston, NH. Isaac, born May 5, 1721, in Kingston moved to Chester, NH, and bought land there in 1745. In 1766 he removed to the new town of Rumney and was the tax collector of the town. In 1769 he was selectman and in 1782 he was the constable. His monument is in the cemetery at the corner of Buffalo and Sandhill roads. His great-grandson, Nathan Clifford, was Justice of the Supreme Court of the United States 1858-1881. Two of Isaac’s sons, John and Samuel, moved in 1801 to Barnston twp, Stanstead Co., Quebec, which was opened for settlement in 1798. Samuel and his wife Sarah Riddell bought a farm No 9 on the 4th Range in 1806 and he was also a Deacon in the Free Will Baptist Church. The French spelled their name Clefford so they would pronounce the name closer to the English. In the 1825 Quebec census in the Parish of Richelieu the Samuel Clifford family had a total 5 “inmates”, four female. Actually, they had had 11 children total. Samuel Clifford, Jr. had a total 8 inmates-4 female and 4 male. Wright Philemon moved to Wisconsin in the spring of 1844. His farm was 169 acres in the south half of both sections 21 and 22 in Burnett twp, Dodge Co. His cream stone house still stands on the road between Burnett and Rolling Prairie. His father and mother and two youngest siblings came to live with him in 1856. (“N.E. Family History” Vol 3 1909-1910 by Henry Quinby, NY, pp 687-723 and THE HISTORY OF STANSTEAD COUNTY PROVINCE OF QUEBEC by B.F. Hubbard, Bowie:Heritage Books, ISBN 1-55613-123-2).

Bill Marquis at WMarq69070@aol.com has a book for sale on the family based 90 percent on vital records.

THE CLIFFORD ASSOCIATION, David Clifford, Keeywaydin, Selsfield Road, West Hoathly, W. Sussex RH194QN (01342811252) England. Clyfford@aol.com. The Association has a database of 30,000 Clifford related people. It is sponsored by the current Lord Clifford. ” [Added by Lisa Hesterman 7/28/2017] [Note: While it is said that our George is “of the parish of Arnold in Nottingham” that doesn’t mean it’s a fact that he or our John were born there, does it? They may simply have lived there and been born elsewhere. There is no record presented to show without a doubt where these men were born.]

Child of George Clifford is: