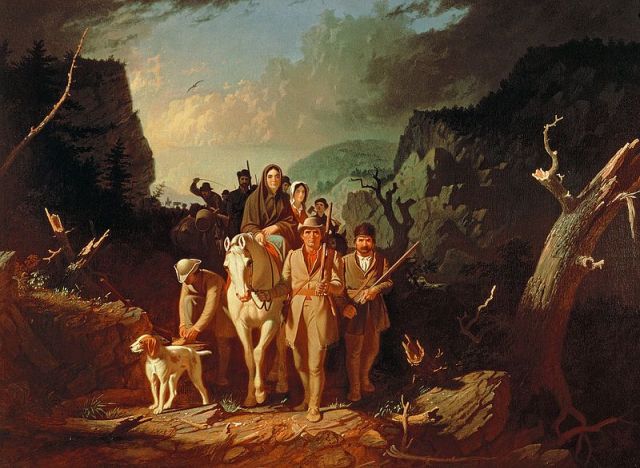 This morning I discovered the wife of Joseph Lane, and grandmother of Harry Lane, married Nathanial Hart who is kin to Thomas Hart who is kin to Senator Thomas Hart Benton, the father of Jessie Benton, who married, John Fremont ‘The Pathfinder’ who was the first Presidential candidate for the Republican Party. These folks are in my Family Tree via my niece, Drew Benton. The Hart and Lane families are related. This is why John Breckenridge chose Joseph Lane as his running mate. The Hart family of Kentucky were partners of Daniel Boone. They owned over a million acres. If the Confederacy had won the Civil War, the Oregon Territory would belong to this family. Now I understand why Senator Benton played both sides of the street. His genetics couldn’t lose. This is America’s foremost family. Slavery was trying to take hold in Oregon.

13. Nathaniel HART. Died About 1820 in Henderson, Henderson Co. KY. He married Mary “Polly” PIERCE. Died 10 Aug 1870 in Douglas, Oregon. Buried in OR. They had the following children:

We hear that Mrs. Gen. Lane died at her home in Douglas county, near Roseburg this week. She has been in feeble health for a number of years. Contributed by Jeanie Sawyer* ———————

When Polly was young she witnessed her family killed in an Indian Massacre, this was about 1810-1812 along the Ohio River most likely in Kentucky. She jumped into a canoe and floated down the river to John Hart and Patience Lanes cabin. She was about 10-12 years of age. The Harts raised her, after they found Polly’s family had been killed. Which included her mother, step father by the name of Pierre, two younger siblings. Her older brother was never found.

In 1821 Polly married Joseph Lane, son of John Lane and Elizabeth Street. Polly and Joseph went on to have 8 children. They lived in Vanderburgh Co, Indiana and then later moved to Douglas Co, Or where they both died and our buried.

Hart, a Revolutionary War soldier, was a member of the Transylvania Land Company. As chief negotiator and a leading advocate for the organization, he was one of many who purchased about 20 million acres of land in Kentucky and Tennessee, a sale negotiated by Richard Henderson from the Cherokee Indians in 1775. The agreement, however, was ultimately deemed null and void by the newly formed Continental Congress. Hart was one of the original settlers of Boonesborough and helped with the construction of the fort.

The Nathanial Hart House is believed to be the first home constructed outside the confines of Fort Boonesborough. It was finally occupied once the threat of Native American attacks was thought to have subsided. Hart was killed by Native Americans in 1782. Unfortunately, the Hart home was burned by vandals in 1989. All that now remains is the foundation. However, the site’s location along Boone Trace makes it of particular historical significance.

Hart chose a spot for settlement about a half a mile from the fort. He and his brother David devoted most of their time constructing the cabin in 1775. The building was composed of two square log pens separated by a frame dogtrot with an ell at the rear. V-notches at the corners connect the logs beneath the weatherboards.

Hart had acquired 640 acres on the creek known as Hart’s Fork in present Madison County. He spent much of his time on the land that had been allocated to him, planting, cultivating, and harvesting crops. He traveled frequently from this location back and forth to Virginia where his family lived. Every year, until his death in 1782, he raised a crop of corn.

Owing to the difficulties of cultivating soil while exposed to the dangers of attacks, it became necessary to organize a company or corporation at Fort Boonesborough. The company was formed in the spring of 1779 to protect the crops, and Hart was one of the trustees. Given specific responsibilities, eighteen armed men banded together and patrolled the crops. Apparently the efforts paid off, because during the dreadful winter of 1779 to 1780, known as the “Hard Winter,” corn became extremely scarce and Hart was able to sell it at $200 a bushel.

In addition, on Richard Henderson’s design for Fort Boonesborough, cabin #14 was labeled “Cabins for Hart and Williams.” This provides strong evidence that Hart sometimes occupied this cabin in the southeast corner of the stockaded fort.

While the Hart House historical marker has been relocated from its original site to the Fort Boonesborough park grounds for safety concerns, the actual site of the remains can still be found by traveling south on Highway 388 (Redhouse Road) for about 0.2 miles from the marker. The foundation ruins are located just off the road on the left, a short distance past the Lisle Cemetery, which is easily identifiable on the right. Captain Hart and other pioneers are buried in the Lisle Cemetery.

Louisiana Breckinridge Hart was named to commemorate the role of Senator John Breckinridge in bringing about the Louisiana Purchase in 1803. She went to Cuba for her health after developing tuberculosis and died there.