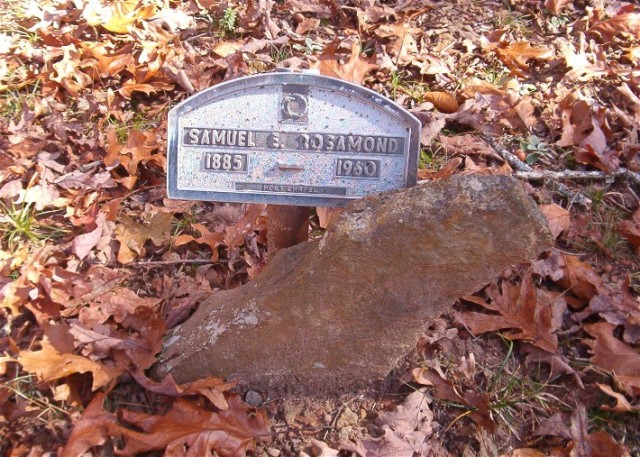 Here is a Patriot’s letter. He can’t spell, but his sacrifice so we can be free, is written in blood. If you are poor, and you can’t spell, then do I got the Right Country for you. We got Freedom, here, that is hanging on by a thread. Captain Crane is writing the news and sending it to other Patriots via the Post Office.

Not able to afford a headstone, Samuel Rosamond’s son, carved a homegrown one! In turn, he just got a stone, and then, a marker placed in the Rosamond cemetery in Arkansas.

I mock those Fake Patriots and screeching angry White Men, who think they got a good cause, and thus – America belongs to them.

Come and try to take this sacred land!

“Captain Adam Crane Jones married, about 1747, Catherine Campbell of Virginia.  Her ancestors, along with other Scotch Protestants, emigrated to Ireland about 1600 from the Highlands of Scotland and came to the New World in the early part of the eighteenth century.  They settled first in Lancaster County, Pennsylvania, later removing to Augusta County, Virginia. [Wallace, p19].

“Samuel enlisted in the militia around 1776-77 and served as a Lieutenant under Captain Adam Crain Jones and Colonel Robert Anderson (for whom Anderson County, SC was named.) In 1782 he was appointed Captain and served at the Siege of Ninety-Six and the Battle of Kettle Creek in Wilkes County, GA on Feb. 14, 1779 during the Revolutionary War. This battle enabled the revolutionists to halt the British advance in Georgia after the capture of Savannah. According to Samuel’s great-grandson James Oliver Rosamond, Samuel served as a scout and spy under the direction of Colonel Francis Mariion, the “Swamp Fox”.

1785 Adam  and Mary Jones write a letter to Nathaniel Saunders.  The following letter indicates to me that Adam’s two sons killed in the Revolutionary War would have to have been born at least five years earlier than Gifford’s records indicate.  It seems that the previous two years of 1783 -85 was very traumatic for the family with loosing two sons and being run off the plantation.   The address of “Dear Brother” and salutation of “Your Loving Brother and Sister” are puzzling.   Adam Jones could not have been Nathaniel’s brother was Mary Jones a Saunders.  I have been able to find no record of this marriage to date.  It is late enough in Adam’s life that his first wife could have died and he remarried.  However, other researchers have said that Catherine died after 1815.   Is Catherine the second wife?

South Carolina Abbevile County September the 10th 1785Dear Brother.
Thease few lines comes hoping to find you and your
family in good health as we are at preasent thanks be to god for his
goodnice for the same I have rote severel lattor to you of late but
have never got any answer We heard you wase out partly as fur as
Where we live but you was not so kind as to come a little furder to
se us We have got home again after being two yeaars away from our
plantation by means of the enemy I rot to you about this before but per
haps you did not git the leatter I lost two of my sons by the enemy one was
taken prisoner and murdered and the other died with his wounds he Recd in a
Ingagement with the enemy with the enemy I was verymuch distrest before I was drove
away but thanks be to god we have just got in away of living again
we have had a very great Drouth this summer the gratest I ever knowd sence I
have bin in this cuntrey grane will be very scarce but I think We shall make
a nough in teh setlements for bread about fifty or sixty mile below us thay have
bin very seasonably and has made grat crops of provision I am in formed so
[ torn document here] that I think thare will be no danger
of peopel suffering in the least over state is laid off in to countes at last
and over landes is much the same of yours only we have only cort every three
months and but seven Justices in a county trad is midling good with us goods
is reasonable and to to bacco is six ? ahalf dollers pr. hundred I hav no
more to say at preasent but I still hope you will come out to see us if you
Nover think of mooving to this cuntry itself I hop you will writ every convenient
opertunity to us John haney and family is in good halth and all over finds
pleae to Rmember us to all frinds and we Remain your loving Brother and
Sister till Deth
Adam and Mary Jones

NB:  I just heard of on W. Marshall
being in over settlement and I had not
time to writ as I wood but the next
opeertunaty I will wright more fullor
a bout the county and affears       AJ