“A Saudi doctor who was allegedly sent to Turkey to assist with the dismemberment of Jamal Khashoggi reportedly told others in the room to listen to music to ease the tension as they cut off the journalist’s head and dismembered his body.”

Music comes from the name Muse. Right-wing Christians have waged a war against Rock and Roll for half a century. When people believe they own the power of Allah-God, who lines their pockets with gold, it is impossible to get in their way. Many evangelicals who put Trump in office, are members of the Prosperity Church – who believe Donald has produced MONEY for them. This is why they don’t object to him being titled ‘Messiah’. Many poor deluded slobs believe they own a ticket in the God Lottery. Their ministers paint a rosy picture for them. After the Tribulation, they walk about in robes and sandal with a big bag of gold hanging in their gird. They look just like rich Arabs. 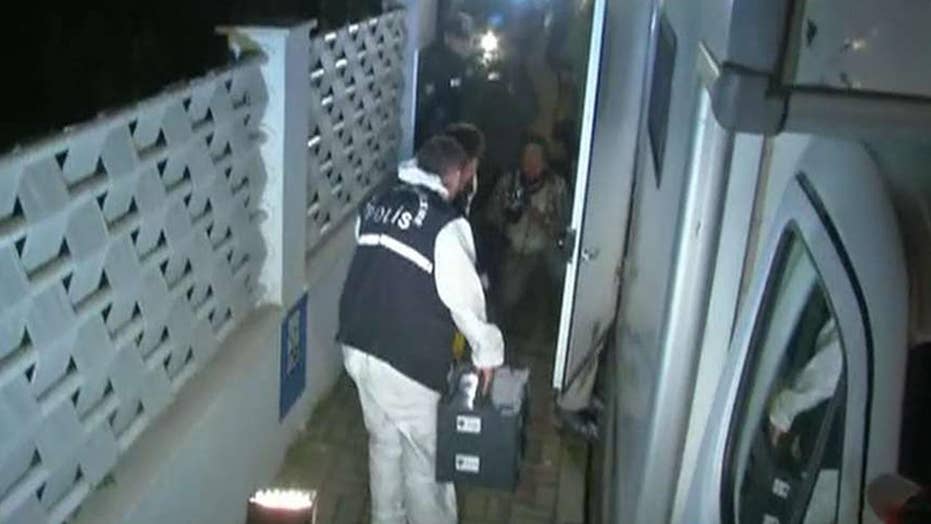 Turkish officials eyeing a member of Saudi intelligence who has traveled with the crown prince; Benjamin Hall reports from outside the consulate in Istanbul.

A Saudi doctor who was allegedly sent to Turkey to assist with the dismemberment of Jamal Khashoggi reportedly told others in the room to listen to music to ease the tension as they cut off the journalist’s head and dismembered his body.

The chilling details of what is believed by some to have occurred at the Saudi consulate in Ankara were revealed by a senior Turkish official who described the content of an audio recording to the New York Times.

No media organization has listened to the purported audio recording made by Khashoggi.

The unnamed official told the paper that Khashoggi was murdered within minutes of entering the consulate. The hit squad of 15 Saudi Arabian men, most of whom held roles in the Saudi government or security services, then proceeded to behead and dismembered the journalist’s body, the report said.

Within two hours the killers were gone, the official said.

WHERE IS JAMAL KHASHOGGI? TURKEY TO SEARCH SAUDI CONSULATE FOR MISSING JOURNALIST AS HIS FIANCÉ DESCRIBES ANGUISH

The leaks, most of them reported in local pro-government newspapers in Turkey, may provide a clearer picture of what happened over two weeks ago when Khashoggi entered the Saudi consulate to obtain documents related to his upcoming marriage to a Turkish woman.

On arrival, Khashoggi was reportedly shown into the office of the Saudi consul, Mohammad al-Otaibi, where the Saudi agents grabbed him and began torturing and beating him, according to the account in the Times. The agents reportedly cut off the journalist’s fingers. The report said it was unclear if he was dead or alive at the time.

The Saudi consul allegedly objected, according to a leak of in the Turkish newspaper Yeni Safak. “Do this outside. You will put me in trouble,” he reportedly told the team.

“If you want to live when you come back to Arabia, shut up,” one of the agents reportedly fired back.

Saudi leadership has denied any involvement. Saudi leaders reiterated their denials to both President Trump and Secretary of State Mike Pompeo.

“Just spoke with the Crown Prince of Saudi Arabia who totally denied any knowledge of what took place in their Turkish Consulate,” Trump tweeted on Tuesday.

“He was with Secretary of State Mike Pompeo during the call, and told me that he has already started, and will rapidly expand, a full and complete investigation into this matter. Answers will be forthcoming shortly,” he added.

It remains unclear how Turkish officials managed to acquire the audio recording that was recorded by the allegedly slain writer. The evidence and the recording could have been obtained using intercepted communications or audio surveillance, the Times reported.

But it’s unlikely the Turkish government will acknowledge the techniques used out of fear of compromising intelligence sources or admitting that they may have violated international law.