I was considering being arrested for improving the Ken Kesey mural by disappearing the words of God found in the Theatre of Job in the Bible, the best seller – of all time! Take time to know who Bill Graham, was, so you will know the engine that drive Donald Trump. This applies to Billy Graham and Wild Bill Cody. Bill was the owner of the Filmore and promoted legendary Rock Bands. The Trump males had a affection for Pastor Graham, and thus Donald inherited the Graham base. Owning a reality show, and Miss Universe, Donald knows about GRABBING HIS AUDIENCE! Wild Bill put on a Wild West show.  These men are type A Personalities. I am Franklin Graham, are type B. I do not aspire to be a type A, but, am forced to take this role – because there is no one out there on the Left to do so! Ken Kesey – is dead! John Lennon, was murdered!

The way to bring down Trump, is work on his deep rooted doubt he is a Type A, like his father. This is why Donald became obsessed with the inaugural crowd size, and why he must undo all Obama did, and render him a Type B. Hillary is Type B. Bill is Type A. Jesus Type A. Paul Type C. To read Paul’s struggle with not being an original Apostle who knew Jesus is epically – PUTRID! It altered my mind and life to read it for the first time. Compare Donald to Paul. Are there any volenteers to do this, verses, help me do this.

If I was Ken, folks would be TRIPPING over one another – with both hands raised – to be the first in line. The Left is too high on THC to – stand up and stand out! We are overgown with Paranoic Humble Weeds! Going to the mail box to get your mail is a trippy experience. Your uncool neighbors will be checking you out, wondering if you are…….HIGH! I watched a video on Ken Babb’s facebook. He and his buds were having a Bar-B-Que. If I had time I would write a comedy sketch.

“Jeez, Ken! Did you have to cook sausages! Reminds me of the Mai Li massacre and all that Napalm. Oh the humanity! I’ll have a soy-burger!”

I had the perfect image of My Arrest. I would bring a little stool. I would wear a smock and a barret, with big black bow. I would set up my tripod, and put this song on my portable cassette player. Here is the greatest White Alpha Male of my age!

Here is THE GREATEST! Tiger Woods – had a comeback yesterday! Trump has theme music when he comes on stage.

Bill Graham paid much attention to how THE PEOPLE made his bands famous, and tried to own THEIR POWER to do this. He rankled the original hippies who saw him a GIANT COP-OUT and USER of our movement. Was he a……..GENIUS?

Imagine the Springfield arresting an old artist who looks like Santa Claus for giving credit where credit is do. The nation will hone in on the BIBLICAL WORDS I defaced. I will be titled THE ANTICHRIST! Would this be so bad? If I don’t take this JOB, who will? The Antichrist – must proceed Jesus! It is WRITTEN in their script. The show must go on.

“We got no Antichrist!”

“What do you mean you aint’ got a Antichrist? He’s part of the Christian pantheon!”

Below is a STAGE. The people are waiting for THE STAR to appear.

Trump has said his fondness for Graham, known as “America’s Pastor,” stems from his protestant father, Fred Trump.

“It’s a relationship that goes back to his childhood,” David Brody, the author of “The Faith of Donald J. Trump: A Spiritual Journey,” told ABC News. “Trump has an affection for Billy Graham based on the fact that his father loved Billy Graham.”

This week Trump, who rarely speaks publicly of his upbringing, recalled during a memorial service for Graham at the U.S. Capitol how his father spoke admiringly about Graham’s famous evangelical revivals or so-called crusades, held in New York City.

“My father said to me, ‘Come on, son’ — and, by the way, he said, ‘Come on, mom. Let’s go see Billy Graham at Yankee Stadium.’ And it was something very special,” Trump recalled Wednesday.

Graham died Feb. 21 in his sleep at his North Carolina home, his spokesman said at the time. He was 99.

On Friday, President Trump and First Lady Melania will travel with Vice President Mike Pence and Second Lady Karen Pence to Charlotte, North Carolina for Graham’s funeral. Trump will be the only living president to attend.

Graham (born Wulf Wolodia Grajonca; January 8, 1931 – October 25, 1991) was a German-American impresario and rock concert promoter from the 1960s until his death in 1991 in a helicopter crash. On July 4, 1939 he was sent from Germany to France to escape the Holocaust. At age 10 he settled in a foster home in the Bronx, New York. Graham graduated from DeWitt Clinton High School and from City College with a business degree.

In the early 1960s, he moved to San Francisco, and, in 1965, began to manage the San Francisco Mime Troupe.[1] He had teamed up with local Haight Ashbury promoter Chet Helms and Family Dog, and their network of contacts, to organize a benefit concert, then promoted several free concerts. This eventually turned into a profitable full-time career and he assembled a talented staff. Graham had a profound influence around the world, sponsoring the musical renaissance of the ’60s from the epicenter, San Francisco. Chet Helms and then Bill Graham made famous the Fillmore and Winterland Arena; these turned out to be a proving grounds for rock bands and acts of the San Francisco Bay area including the Grateful Dead, Jefferson Airplane, and Big Brother and the Holding Company with Janis Joplin,[2] who were first managed, and in some cases developed, by Chet Helms.

Graham was born in Berlin,[3] the youngest child and only son of lower middle-class parents, Frieda (née Sass) and Jacob “Yankel” Grajonca,[4] who had emigrated from Russia before the rise of Nazism.[5][6] His father died two days after his son’s birth.[7]

Graham was nicknamed “Wolfgang” by his family early in life.[8] Due to the increasing peril to Jews in Germany, Graham’s mother placed her son and her youngest daughter, Tanya “Tolla”, in a Berlin orphanage, which sent them to France in a pre–Holocaust exchange of Jewish children for Christian orphans. Graham’s older sisters Sonja and Ester stayed behind with their mother. After the fall of France, Graham was among a group of Jewish orphans spirited out of France, some of whom finally reached the USA. But a majority, including Tolla Grajonca, did not survive the difficult journey. He was one of the One Thousand Children (OTC), those mainly Jewish children who managed to flee Hitler and Europe, and come directly to North America, but whose parents were forced to stay behind. Nearly all these OTC parents were killed by the Reich. Graham’s mother died at Auschwitz. Graham had five sisters, Rita, Evelyn, Sonia, Ester and Tolla, the elder four of whom survived the Holocaust. Rita and Ester moved to the United States and were close to Graham in his later life. Evelyn and Sonia escaped the Holocaust, first to Shanghai, and later, after the war, to Europe.[citation needed]

Once in the United States, Graham was placed in a foster home in The Bronx in New York City. After being taunted as an immigrant and being called a Nazi because of his German-accented English, Graham worked on his accent, eventually being able to speak in a perfect New York accent. He changed his name to sound more “American.” (He found “Graham” in the phone book—it was the closest he could find to his birth surname, “Grajonca”. According to Graham, both “Bill” and “Graham” were meaningless to him.) Graham graduated from DeWitt Clinton High School and then obtained a business degree from City College.[9][10] He was later quoted as describing his training as that of an “efficiency expert“.[citation needed]

Graham was drafted into the United States Army in 1951, and served in the Korean War, where he was awarded both the Bronze Star and Purple Heart. Upon his return to the States he worked as a waiter/maître d’ in Catskill Mountain resorts in upstate New York during their heyday. He was quoted saying that his experience as a maître d’ and with the poker games he hosted behind the scenes was good training for his eventual career as a promoter. Tito Puente, who played some of these resorts, went on record saying that Graham was avid to learn Spanish from him, but only cared about the curse words.[11] 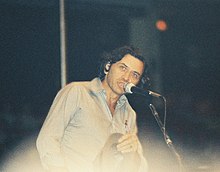 Graham moved from New York to San Francisco in the early 1960s to be closer to his sister Rita. He was invited to attend a free concert in Golden Gate Park, produced by Chet Helms and the Diggers, where he made contact with the San Francisco Mime Troupe, a radical theater group.[12] After Mime Troupe leader Ronnie Davis was arrested on obscenity charges during an outdoor performance, Graham organized a benefit concert to cover the troupe’s legal fees. The concert was a success and Graham saw a business opportunity. Bill Graham began promoting more concerts with Chet and backing Chet Helms and Family Dog projects, which provided a vital function of the 1960s, promoting concerts which provided a social meeting place to network, where many ideologies were given a forum, sometimes even on stage, such as peace movements, civil rights, farm workers and others. Most of his shows were performed at rented venues, and Graham saw a need for more permanent locations of his own. Charles Sullivan was a mid-20th-century entrepreneur and businessman in San Francisco who owned the master lease on the Fillmore Auditorium.

Graham approached Sullivan to put on the Second Mime Troupe appeals concert at the Fillmore Auditorium on December 10, 1965, using Sullivan’s dance hall permit for the show. Graham later secured a contract from Sullivan for the open dates at the Fillmore Auditorium in 1966. Graham credits Sullivan with giving him his break in the music concert hall business. Charles Sullivan was found murdered on August 2, 1966 in San Francisco. The murder remains unsolved.[13]

The Fillmore trademark and franchise has defined music promotion in the United States for the last 50 years. From 2003–13 auxiliary writers of the times surrounding the 1960s, and Graham family lawsuits,[14] tell the narrative of the Fillmore phenomena and how the black community there was disenfranchised.[15] The best way to set the historic record straight concerning Charles Sullivan and Bill Graham is to review what Graham left in his own words. Historically the first time Graham mentioned Charles Sullivan, in print, is this article from 1988, “The Historic Fillmore’s New Tradition by Keith Moerer”

Bill Graham—and anyone who’s even attended a show at San Francisco Fillmore—owes a big debt to Charles Sullivan…”If Mr. Sullivan, Charles, hadn’t stood by me and allowed me to use his permit I wouldn’t be sitting here.”[16]

The Fillmore Auditorium was located on Fillmore and Geary which was like 125th Street and Lenox Avenue in Harlem…In there, Charles Sullivan, a black businessman, had booked a lot of the best R&B acts…Charles had put on James Brown and Duke Ellington. At the Fillmore, Bobby Bland and the Temptations…I met Charles Sullivan by appointment the second time I saw the ballroom…We needed a dance permit but I didn’t have one. Of course he had one because he operated the place. So he allowed us to use his permit and didn’t charge me for it.[8]