Qanon and The Quacking Rabbit

The Qanon folks are in denial they voted for Trump because they are racists at heart.

I tried to tell my friends, Marilyn and Kenny Reed, and their friend, Eric Richardson of the NAACP, that white people are going for a white identity, and WE had better offer them one, or, the Republicans will. I kept telling them about the Turners, who fought for the Union against Slavery. Theys insisted on seeing things in black and white, believing Hillary was going to win, and thus Black Lives Matter will take over the Democratic party. What were blacks doing for the eight years they had a black President?

I tried to get them to think SWING VOTERS, meaning white males who want to own a rational white identity. They targeted me because I was a convenient target. With even more proof that white people are crazy-ass racists, black people are going to try to use this fact to tip the titter-totter their way – once and for all. Justice will be done! They will demonize white people around the clock. Swing voters will go the Republican way.

I tried to tell Marilyn the internet was tricky. She got on facebook and didn’t have a clew how it worked. We all want to play our best hand – and win! The Russian Trolls were wise to this, and chummed up to us and pretended to be our friends. I was on them. They will be back, they never left! They will encourage black people and minority groups, to not be moderates and let Trump’s folks hang themselves. A black lynch party will be formed. White people will grow afraid. I have little hope.

Twelve members of SLEEPS took over Eugene, and raised hell. No one could stop them because they USED the homeless crisis to hide behind, and own power. Jean Stacey needs to be investigated by the FBI. She turned white people against one another by preaching there was a moral deficiency in affluent whites that would be overcome with a little education. She drove white people to vote for Trump. Many white people hate the homeless and want them out of their downtowns – so they can go there!

THINK SWING VOTES! This is not a moral equivalency test! Everyone wants to be right, but, voting for this is not the way. Get those crazy bastards out of office. One out of every two people you see on the street, voted for a crazy quack. Crazy Quacks live next door to you – and are members of your family! Think about more cuts to our social safety net.

VOTE TO WIN! Study the faces in the image below. What do they want? They want angry black  people, and angry homeless people, out of their face, because, they have come to believe there are NO SOLUTIONS for their problems. STOP proving them right! Putin and Trump has proven to these faces they have solved the COLD WAR problem, and, it’s over! White People think they are smart and good people – who can solve problems!

WHO CAN SOLVE PROBLEMS! They will not listen to any evidence – they can’t! They will never hear any evidence that Jesus and God did not SOLVE big problems – either! They look at the Holy Men on either side of Putin, and they believe he is on – THEIR SIDE – and God is going to win – alas!

I love the photo of Belle after she puts on her Thinking Lips. She hears the mystery woman is nervous about me capturing her with my camera. What to do? I see a four year old who has been caught, and, is plotting how to elude – GUILT. I find it very hard to be angry at Belle. She is Alice in Wonderland.

QAnon adherents encourage those seeking the truth to “follow the White Rabbit,” but it’s hard to hop down this hole without getting totally lost in their horrorland. The simplest description of the plot line goes something like this: President Trump isn’t under investigation; he is only pretending to be, as part of a countercoup to restore……….

As the cameras rolled on President Trump’s campaign rally for GOP Rep. Ron DeSantis in Florida on Tuesday night, a peculiar sign appeared in view.

It goes like this: Special counsel Robert Mueller isn’t actually investigating Trump and his 2016 campaign for their possible ties to Russia, and he’s not really looking into Russian interference in the 2016 presidential election.

Rather, Mueller was appointed by Trump to investigate Hillary Clinton, Barack Obama and other top Democrats, like former Clinton campaign chairman John Podesta. According to posts written by “Q” — dubbed “breadcrumbs” by the theory’s followers — even Sen. John McCain, R-Ariz., is a target of Mueller’s so-called investigation.

What are these foes of Trump being “investigated” for? There are numerous accusations floating around the QAnon world. Some suggest Clinton and Obama are in cahoots with Russian President Vladimir Putin. Others suggest they, along with Hollywood figures and other world leaders, are participants in a global pedophile ring.

“Q” suggests all these figures are secretly wearing location-tracking ankle monitors, so their whereabouts can be monitored at all times, and that they’ll all be sent to prison very soon in an event the theory’s followers call “the storm.”

That’s a reference to Trump’s remarks last year, where he warned of “the calm before the storm” during a meeting with military leaders. (The military is also involved in the QAnon theory — according to “Q,” the military persuaded Trump to run for president in order to clean up the vast criminal network.) 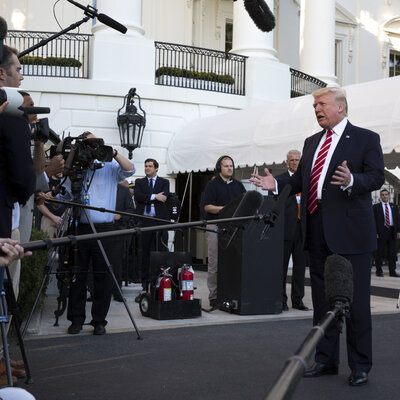 Trump Challenges Cabinet Member’s IQ, Fights Senator He Needs. What Is Going On?

“Q” has dropped “breadcrumbs” about coming events in the supposed investigation on a regular basis. The hints reference current political events, including the release of the Justice Department’s Office of the Inspector General report in June.

It should be noted that no part of the QAnon conspiracy theory has proved to be true, and multiple media outlets have debunked the theory’s allegations.

Who believes in the conspiracy theory?

For a while, QAnon posts were mostly limited to anonymous Internet message boards, like 4chan and 8chan. But over the past year, “Q” has gained a host of new believers and followers. A popular YouTube video explaining QAnon has racked up nearly 200,000 views, and according to NBC News, a mobile phone application related to the conspiracy theory climbed near the top of the Apple App Store rankings earlier this year. 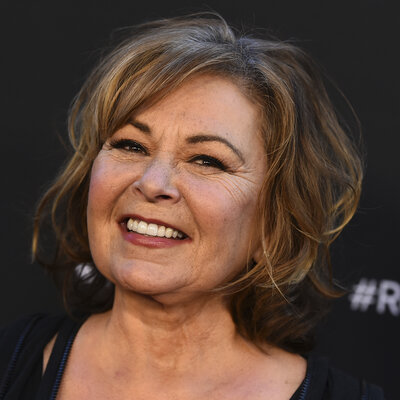 ABC Cancels ‘Roseanne’ After Racist Twitter Rant From Its Star

“Q” also counts several celebrities as followers and fans. Roseanne Barr has frequently tweeted about QAnon and has expressed a desire to meet “Q.” And in June, the sitcom star took to Twitter to share a phrase common among QAnon supporters — “wwg1wga,” short for “where we go one, we go all.”

1 Response to Qanon and The Quacking Rabbit