Rosmerta and the Messenger

In looking at the town Johannes Heil was born, Medard, I read the reliefs of Rosmerta were found here. She is often found next to Mercury, the Messenger. She is a ‘Giver’ like John the Baptist who was a Messenger.

My mother Rosemary told me her mother’s people owned castles along a German river with Heil in its name. This may be the Glen river. There are castles all over this area. The Celts and Merovingians were at home here. I have come home to ‘The Shire’.

Look at that beautiful horse Elizabeth Rosemond Taylor owns. It was given to her by a friend of Winston Churchill. Liz was a Messenger and Healer at the end of her life.

This article is about the Celtic goddess. For information about the character from the fictional Harry Potter series, see Madam Rosmerta. 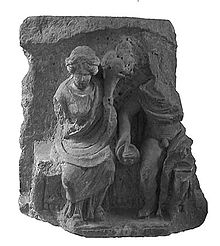 In Gallo-Roman religion, Rosmerta was a goddess of fertility and abundance, her attributes being those of plenty such as the cornucopia. Rosmerta is attested by statues, and by inscriptions. In Gaul she was often depicted with the Roman god Mercury as her consort, but is sometimes found independently.

A relief from Autun (ancient Augustodunum, the civitas capital of the Celtic Aedui), shows Rosmerta and Mercury seated together as a divine couple. She holds a cornucopia, with Mercury holding a patera at her left side. 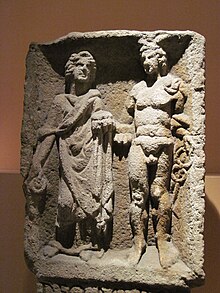 Relief of Mercury and Rosmerta from Eisenberg in present-day Rhineland-Palatinate.

A bas-relief from Eisenberg[1] shows the couple in the same relative positions, with Rosmerta securely identified by the inscription.[2] Rosmerta holds a purse in her right hand and a patera in her left.

In a pair of statues from Paris depicting the couple, Rosmerta holds a cornucopia and a basket of fruits.

Rosmerta is shown by herself on a bronze statue from Fins d’Annency (Haute-Savoie), where she sits on a rock holding a purse and, unusually, also bears the wings of Mercury on her head. A stone bas-relief from Escolives-Sainte-Camille[3] shows her holding both a patera and a cornucopia. 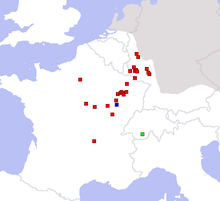 Map showing the location of inscriptions dedicated to Rosmerta (in red), as well as to Cantismerta (green) and Atesmerta (blue).

Twenty-seven inscriptions to Rosmerta are listed by Jufer and Luginbühl,[4] distributed in France, Germany and Luxembourg, corresponding mainly to the Roman provinces of Gallia Belgica and Germania Superior. An additional two inscriptions are known, one from Roman Dacia.[5]

An inscription from Metz[6] is a dedication (votum) to Mercury and Rosmerta jointly. Another from Eisenberg was made by a decurion in fulfillment of a vow to the couple jointly.[7]

In two inscriptions[8] both from Gallia Belgica, Rosmerta is given the epithet sacra, sacred. A lengthier inscription from Wasserbillig in Gallia Belgica[9] associates the divine couple with the dedication of a shrine (aedes), with “hospitable” rites to be celebrated.[10]

The name Rosmerta is Gaulish, and is analysed as ro-smert-a. Smert means “provider” or “carer” and is also found in other Gaulish names such as Ad-smerio, Smertu-litani, Smerius (Σμερο), Smertae, Smertus, and others.[11] Ro- is a modifier meaning “very”, “great”, or “most” as found in Ro-bili (“most-good”) or Ro-cabalus (“great horse”).[12] The -a ending is the typical Gaulish feminine singular nominative. The meaning is thus “the Great Provider”.

The municipality of Medard has yielded a wealth of archaeological finds from prehistoric and Roman times. The Marialskopf in the southeast was in the time when the area was settled by the Celts ringed by walls and palisades, a refuge castle. The remnants of this settlement within the ringwall can still clearly be seen. In 1973 and 1983, archaeological digs unearthed and secured potsherds from vessels made by the Hunsrück-Eifel Culture. Significant was the recovery of a silver coin struck in Pannonia, a quarter-stater with Zeus’s head on the obverse and an image of a rider on the reverse. Splinters and shards of old ceramic vessels are still to be found on those lands today. It is likely that the Celtic settlement remained once the Romans had conquered Gaul. Near Medard’s mediaeval church, foundations from a settlement built in Gallo-Roman times were discovered in 1973. It turned out to be a villa rustica from the turn of the 4th century AD. In 1979, 1980 and 1984, under Diethelm Malitius’s leadership, some outbuildings were also partly unearthed. The archaeologists also discovered fragments of sculptures, one showing a female figure, grapevine shoots and a horn of plenty full of fruits. In the Middle Ages, it is likely that many stone reliefs still lay all around in the ground, perhaps explaining the spolia from Roman times that can still be seen in the church walls today, showing such things as grapes and another female figure. Taken out of the church’s walling were the fragments of a relief that shows Medea on a wain drawn by snakes. Of Medea’s children, whom she killed out of jealousy, only the lower part of a boy’s body can still be seen. The image’s background shows her unfaithful husband, Jason.

Lauterecken arose only about 1000 at a castle and was likely granted town rights in 1349. Meisenheim, which was a town as of 1315, was also raised as early as the 12th century to residence town by the Counts of Veldenz.

The Gallo-Roman settlement near today’s village may have vanished in the 5th century. The archaeological discoveries suggest that there was an epoch during which the area was not settled, but it was quite soon that more settlers came and founded another settlement. Nevertheless, it is unknown just when this village was founded. Indeed, during the digs at the villa rustica, the archaeologists also found the outlines of six small pit-houses from the Middle Ages. It is to be assumed that the village’s first houses arose very early after the Franks took the land, on the mountainside, likely near a wooden church. The pit-houses that were unearthed, going by what is known about such things by archaeology, likely date from the 10th or 11th century. They must not have been the oldest buildings from the time of post-Roman settlement. Originally, the estate of Medard lay in the Free Königsland, but was given by a Merovingian king into the ownership of the Bishops of Verdun, although it is unknown when this donation happened. The Counts of Veldenz as successors to the Counts of the Nahegau founded out of their own small holdings and out of extensive territories that they safeguarded as Vögte belonging to the Bishoprics of Mainz, Worms, Verdun and Reims their new county, the County of Veldenz. In a 1235 document, the fiefs held by the Counts of Veldenz from the Bishops of Verdun were listed: Veldenz, Medard, Baumholder, Wolfersweiler, Freisen, Sankt Wendel, Tholey and Neunkirchen an der Nahe.

Rosmerta, the Great Provider – a Celtic Goddess of Abundance by Judith Shaw

As we near August 2, known to the ancient Celts as Lughnasadh or Lammas, examples of abundance are everywhere.  Gardens and farms are in full bloom with some crops ready for harvest and others very near.  Lambs born in spring are now reaching maturity. Days are still long and we are full of energy. It is a perfect time to remember the Celtic Goddess, Rosmerta.

Rosmerta,  a goddess loved by both Celtic and Roman Gauls was known as ”The Great Provider”. She is a goddess of fertility and wealth. She was worshipped in South-western Britain, Gaul, and along the Rhone and the Rhine rivers.

After the region was conquered by Rome, Rosmerta was incorporated into the Roman pantheon, becoming associated with Mercury.  Though She has been called Mercury’s consort there is no evidence that was the nature of their relationship.  She survived in the Roman era as a powerful goddess in Her own right, being depicted alone many times.  Alone and with Mercury, She carries a cornucopia and a basket of fruit, symbols of abundance.   A giving goddess, She was often shown with a patera, a ritual offering bowl, and with a ladle or scepter.

Rosmerta has a unique attribute which has been difficult to decipher.  Marian Green suggests that this attribute is a butter churn.  In lands where cattle is wealth one would expect milk to be an important part of the economy and of religious ritual.  It is not hard to imagine a link between Rosmerta’s butter churn and the magic cauldrons found so often in Celtic mythology.   Both are sources of plenty and transformation.

In addition Rosmerta was often depicted with the caduceus, Mercury’s wand with two entwined snakes.  The caduceus is associated with healing, making Rosmerta a healing goddess also.   A bronze statue of Her from Haute-Savoie, a department in the Rhône-Alpes region of eastern France, shows Her sitting on a rock holding a purse with the wings of Mercury on Her head.  Rosmerta with a purse suggests that she also bestowed abundance in the form of money.  It seems that Rosmerta was able to not only share but also to appropriate Mercury’s powers.

Call on Rosmerta for help with material well-being –  sales for your business,  a raise at your job, finding a job and financial investments are all things with which She can help. Rosmerta will also help with the abundance we need from Mother Earth.  In these days of crazy weather events which affect our ability as a species to grow and harvest crops call on Rosmerta to help us all maintain an abundant supply of food.   Her powers of fertility and abundance, combined with Her healing skills makes Her a perfect Goddess to call on to heal our world and bring us to a state of harmony and abundance.