I am blown away. I just found Jame’s Bond’s wife, Tracy Bond, played by one of my favorite actresses, Diana Rigg. For two hours this morning I looked at Lara Rozemond as a possible main character of my Flemming revival ‘The Royal Janitor’. I was not happy with Serena being an older woman. I would lose most of my audience. I looked at some videos of Lara, and captured these shots. Then I saw her, Emma Peel, the besutiful star in ‘The Avengers. I wanted to send Lara another message saying I am certain she is my kin, and related to Elizabeth Rosemond Taylor. I wanted her to look at these blue eyes. Then, I thought I better not give the impression I am stalking her. I did not want to make promises I could not keep.

Emma and Lara have baby faces. I have a rule to run by what is old, past the young, who never heard, nor saw ‘The Avengers’. I went googling! I am blown away! This is like the story of Cinderella and the Glass Slipper. She is kin to me a Liz – in a fictional manner! She is kin to Sir Caspar John – in a fictional manner. I left out the opening scene I envisioned two weeks ago – because I was not inspired! Thank you Great Muses!

Lara has taken acting lessons. She needs more lessons. She is too aware of the camera. Relax, and let the camera become aware of you. Take martial arts. Take a video camera and got read your poems in public. Be as dramatic as your poems. Get to the core of your anger. Be your dragon! I will develop your character from the model you give me. You are Denim and Silk – reborn! This is Kismet!

Teresa “Tracy” Bond (born Teresa “Tracy” Draco, and also known as the Contessa Teresa di Vicenzo) is a fictional character and the main Bond girl in the 1963 James Bond novel On Her Majesty’s Secret Service, and its 1969 film adaptation. She is the only Bond girl to actually marry 007. In the film version, Tracy is played by actress Diana Rigg.

Serena Victoria Eastman could not get to Osborne House fast enough. When she got behind the wheel of her 1961 Jaguar she named ‘Grey Cloud’ the young women who picked her up at the airport tried not to show that she had been warned. She was two shades a pale grey when they arrived at the palace built for Victoria and Albert. She tried to keep up on unsteady legs. The blood was returning to her hands now that she unloosened her grip. As they made their way into the basement she realized she had an experience better than sex. She was a virgin. All her blood veins were alive with an energy she did not know existed. She felt adventurous, and nauseous. She knew she would never be the same.

At the stainless steel door, Sabrina stopped, pointed up, and asked;

“What does that say?”

It says……….”I can tell that you are quite left-leaning.”

“Why is it there?” Sabrina asked.

“To remind us to never underestimate anyone. And, never think for a second a whacked-out poet-artist and Bohemian type, is not a true patriot.”

Born Teresa Draco in 1943, she is the only child of Marc-Ange Draco, the head of the Union Corse, a powerful Corsican crime syndicate – not quite as large as SPECTRE, but with substantially larger “legal” operations, including Draco Construction. Teresa goes by “Tracy” because she feels “Teresa” does not suit her (as she introduced herself to Bond, “Teresa is a saint; I’m known as Tracy”).

Tracy’s mother died in 1955; her father then sent her to a boarding school in Switzerland. Deprived of a stable home life, Tracy joined the “international fast set”, committing “one scandal after another”; when Draco cut off her allowance, Tracy committed “a greater folly” out of spite. She later married Italian Count Giulio di Vicenzo who, during their marriage, got hold of a large portion of her money before eventually leaving her; he subsequently died while driving a Maserati in the company of one of his mistresses. During this marriage, Tracy had a child, who later died of spinal meningitis. 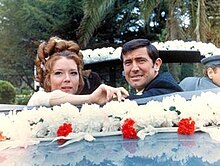 Desperate with grief for her child, Tracy attempted suicide by walking into the sea in Portugal, only to be saved by James Bond.[1]

When her father meets Bond, he pleads with Bond to continue to see her, claiming that their relationship had changed her for the better. Bond initially refuses, but he changes his mind when Marc-Ange offers his resources for anything Bond desires. Since the events of Thunderball and the demise of SPECTRE, Bond had been hunting for Ernst Stavro Blofeld, and at one point was willing to retire from MI6 because he felt the hunt was folly and that his services and abilities could be used better. Using Draco’s resources, however, Bond is able to track Blofeld to Switzerland. In return, Bond continues to see Tracy and eventually falls in love with her. Tragedy strikes on their wedding day, however, when Blofeld and his henchwoman Irma Bunt shoot at Bond and Tracy in a drive-by shooting. Tracy is shot in the head and killed.

In Fleming’s novels, Bond is a broken man after Tracy’s death. In You Only Live Twice, he has begun drinking heavily, which has affected his work; M is forced to acknowledge that he is no longer fit for service. However he decides to give Bond one last chance and assigns him to an intelligence-related diplomatic affair in Japan. This in turn leads to a duel to the death with Blofeld in the climax of the novel, and Bond is finally awarded his revenge. In the aftermath, however, he is left with amnesia.

In the films, James Bond is tracking Blofeld in the pre-title credits sequence of Diamonds Are Forever. The film does not explain why nor does it mention Tracy. Originally, it had been planned that On Her Majesty’s Secret Service would end with Bond and Tracy driving away from their wedding. The scenes where she was shot were filmed at the same time with the intention that they would form the pre-title sequence of Diamonds Are Forever. This was rendered inviable when George Lazenby left the role.

Subsequent films reference the fact that Bond was previously married, but only fleetingly: 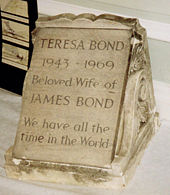 The tombstone of James Bond’s wife, Teresa, which Bond visits in For Your Eyes Only. Shown at a James Bond convention in 1992.