Church of Art Against Armageddon

The Church of Art opposes Armageddon, and is Pro-life in this area. I am going to bring a lawsuit against Donald Trump that will allow members of the Church of Art to question whether their doctor, nurse, or medical attendant subscribes to the horrific End Time Destruction, where millions are slaughtered – including the unborn! I would not want anyone who prays for the end of the world to be involved in any medical or healing issue I have, that is paid for by my insurance. I want to receive 100% positive energy around me.  I do not want to be at the mercy of some – NUT – who believes in the Devil Man of Holy Fire and Brimstone! Consider the Hippocratic Oath. You can’t serve two masters. If you got a problem, get into another line of work. There are laws against Cruelty to Animals. Jesus has no right to murder and incinerate people’s pets.

The Church of Art supports the Ancient and New Healing Arts, even when administered to by the Goddesses. Caring for humanity was here on earth long before the establishment of Christianity that sees itself as a world religion, and thus does not own the franchise in this Democracy. Native Americans practiced the loving and healing arts long before the confused white man arrived, many of them titled heretics by the Religions of Europe.

WASHINGTON — The Trump administration announced on Thursday that it was expanding religious freedom protections for doctors, nurses and other health care workers who object to performing procedures like abortion and gender reassignment surgery, satisfying religious conservatives who have pushed for legal sanctuary from the federal government.

The new steps, which include the creation of an oversight entity within the Department of Health and Human Services called the Conscience and Religious Freedom Division, are the latest efforts by President Trump to meet the demands of one of his most loyal constituencies. They coincide with Mr. Trump’s planned address on Friday to abortion opponents at the annual March for Life in Washington.

For religious conservatives, the new protections address long-held concerns that religious people could be forced to comply with laws and regulations that violate their religious beliefs. Roger Severino, the director of the office for civil rights at the Department of Health and Human Services, promised that he and his staff would investigate every complaint of a violation of “conscience rights” protected by federal law.

But civil rights, gay rights and abortion rights groups, as well as some medical organizations, expressed alarm at a move they described as part of a systematic effort by the Trump administration to legitimize discrimination. Their concern is not limited to the executive branch. Mr. Trump has appointed judges to powerful appellate courts at a rate faster than any new president since Richard M. Nixon, and the Republican-controlled Senate is working to speed the approval of Mr. Trump’s lower-level district court nominees.

Senator Patty Murray of Washington, the senior Democrat on the Senate health committee, said the administration was using the civil rights office as “a tool to restrict access to health care for people who are transgender and women.”

I swear by Apollo the Healer, by Asclepius, by Hygieia, by Panacea, and by all the gods and goddesses, making them my witnesses, that I will carry out, according to my ability and judgment, this oath and this indenture.

To hold my teacher in this art equal to my own parents; to make him partner in my livelihood; when he is in need of money to share mine with him; to consider his family as my own brothers, and to teach them this art, if they want to learn it, without fee or indenture; to impart precept, oral instruction, and all other instruction to my own sons, the sons of my teacher, and to indentured pupils who have taken the physician’s oath, but to nobody else.

I will use treatment to help the sick according to my ability and judgment, but never with a view to injury and wrong-doing. Neither will I administer a poison to anybody when asked to do so, nor will I suggest such a course. Similarly I will not give to a woman a pessary to cause abortion. But I will keep pure and holy both my life and my art. I will not use the knife, not even, verily, on sufferers from stone, but I will give place to such as are craftsmen therein.

Into whatsoever houses I enter, I will enter to help the sick, and I will abstain from all intentional wrong-doing and harm, especially from abusing the bodies of man or woman, bond or free. And whatsoever I shall see or hear in the course of my profession, as well as outside my profession in my intercourse with men, if it be what should not be published abroad, I will never divulge, holding such things to be holy secrets.

Now if I carry out this oath, and break it not, may I gain for ever reputation among all men for my life and for my art; but if I transgress it and forswear myself, may the opposite befall me

Views in opposition to abortion[edit]

See also: Religion and abortion, Sanctity of life, and Culture of life

The variety in opinion on the issue of abortion is reflected in the diverse views of religious groups. For example, the Catholic Church considers all procured abortions morally evil,[20] while traditional Jewish teaching sanctions abortion if necessary to safeguard the life and well-being of the pregnant woman.[21] 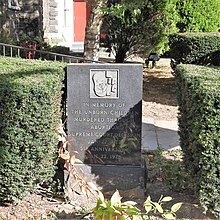 Anti-abortion monument of a parish church in Brooklyn, New York

See also: Christianity and abortion and History of early Christian thought on abortion

The only coordinated opposition to abortion in the United States during the early 1970s before the Roe v. Wade decision was from the United States Conference of Catholic Bishops and its Family Life Bureau. Mobilization of a wide-scale anti-abortion movement began immediately after in 1973 with the creation of the National Right to Life Committee (NRLC).[22]

Before 1980, the Southern Baptist Convention officially advocated for loosening of abortion restrictions.[23] During the 1971 and 1974 Southern Baptist Conventions, Southern Baptists were called upon “to work for legislation that will allow the possibility of abortion under such conditions as rape, incest, clear evidence of severe fetal deformity, and carefully ascertained evidence of the likelihood of damage to the emotional, mental, and physical health of the mother.”[23] W. Barry Garrett wrote in the Baptist Press, “Religious liberty, human equality and justice are advanced by the [Roe v. Wade] Supreme Court abortion decision.”[23] By 1980, conservative Protestant leaders became vocal in their opposition to legalized abortion,[24] and by the early 1990s Pat Robertson‘s Christian Coalition of America became a significant anti-abortion organization.[25] In 2005, Richard Land, president of the Southern Baptist Convention’s Ethics and Religious Liberty Commission, said that making abortion illegal is more important than any other issue.[26]

Much of the anti-abortion movement in the United States and around the world finds support in the Roman Catholic Church, the Christian right, the Lutheran Church–Missouri Synod and the Wisconsin Evangelical Lutheran Synod, the Church of England, the Anglican Church in North America, the Eastern Orthodox Church, and The Church of Jesus Christ of Latter-day Saints (LDS).[27][28][29][30] However, the anti-abortion teachings of these denominations vary considerably. The Eastern Orthodox Church and Roman Catholic Church consider abortion to be immoral in all cases, but may in some cases permit an act[citation needed] which indirectly and without intent results in the death of the fetus in a case where the mother’s life is threatened. In Pope John Paul II’s Letter to Families he simply stated the Roman Catholic Church’s view on abortion and euthanasia: “Laws which legitimize the direct killing of innocent human beings through abortion or euthanasia are in complete opposition to the inviolable right to life proper to every individual; they thus deny the equality of everyone before the law.”

The National Association of Evangelicals and the LDS Church oppose abortion on demand. However, the NAE considers abortion permissible in cases with clear evidence of severe fetal deformity, dire threat to the life/physical health of the pregnant woman, or when a pregnancy results from rape or incest.[31][32][33] The Taskforce of United Methodists on Abortion and Sexuality (TUMAS) was formed in 1987 to further the anti-abortion ministry in The United Methodist Church.[34] The Southern Baptist Convention believes that abortion is allowable only in cases where there is a direct threat to the life of the woman.[31] Other Mainline Protestant denominations in the United States, such as the Episcopal Church, the Evangelical Lutheran Church in America, the Presbyterian Church (U.S.A.), and the United Church of Christ, are pro-choice.[31]

Supporters of the consistent life ethic also oppose abortions as one of the acts that end human life. In 1979, Juli Loesch linked anti-abortion and anti-nuclear weapons arguments to form the group Prolifers for Survival. In 1987 this group defined an ethic of the sanctity of all life, and formed the group Seamless Garment Network. This group was against abortion, euthanasia, capital punishment, militarism, poverty and racism.[35] Beginning in 1983, American Catholic Cardinal Joseph Bernardin argued that abortion, euthanasia, capital punishment, and unjust war are all related, and all wrong. He said that “to be truly ‘pro-life,’ you have to take all of those issues into account.”[36] Paul M. Perl studied 1996 voter statistics and found that the consistent life ethic is difficult for religious leaders to promote because it combines the generally conservative anti-abortion stance with a liberal social attitude.[37] 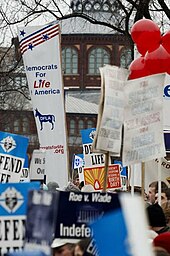 Democrats for Life of America demonstrates at the 2006 March for Life.