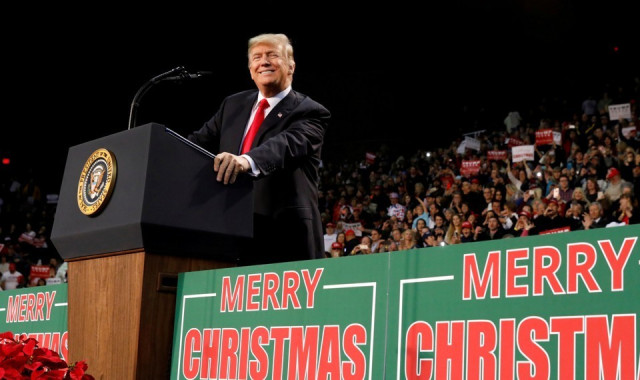 I am right! I saw this coming! Trump insults a whole continent for not being The Right Stuff, and snubs the British Commonwealth, treats them like shitholes.

In an early-morning tweet, Trump said he was scrapping a visit because he is “not a big fan” of the real estate deal in which the United States sold the lease of its old embassy, located in an affluent, central London neighborhood, to move to a new site in south London, an area Trump described as an “off location.”

Many Londoners suggested the real reason he is not coming is because he is concerned about hostile demonstrations.

Sadiq Khan, the mayor of London, said a visit would spark “mass peaceful protests.” Trump is not welcome in London while he pursues a “divisive agenda,” Khan tweeted, and “it seems he’s finally got that message.”

But at least one prominent British cabinet official took no part in the gloating. Foreign Secretary Boris Johnson, a former mayor of London, accused Khan and Labour Party leader Jeremy Corbyn of endangering the “crucial relationship” between the United States and Britain. He also called Khan a “puffed up pompous popinjay.”

The Ministry of Defence (MOD) protects the security, independence and interests of our country at home and abroad.

We work with our allies and partners whenever possible. Our aim is to ensure that the armed forces have the training, equipment and support necessary for their work.

The MOD works with the United States on joint overseas operations and contingency planning, bilateral defence co-operation, interoperability and engages on defence trade.

Our team in the United States assists this work and communicates the broader transatlantic defence relationship, elevates the UK’s interests and reputation and provides high-quality advice and reporting to the UK on all aspects of defence business.

The MOD is responsible for: defending the UK and its overseas territories, providing strategic intelligence, providing nuclear deterrence, supporting civil emergency organisations in times of crisis, defending our interests by projecting power strategically and through expeditionary interventions, providing a defence contribution to UK influence and providing security for stabilisation.

The British Defence Staff in the United States comprises some 750 military and civilian MOD personnel based in over 30 states across the US. Their mission is to protect and advance the UK and its interests by reinforcing the transatlantic defence and security relationship.

Preserving global peace & security — The UK and the US co-operate to address the world’s most pressing security challenges.

Co-operating in science, innovation, energy and higher education — The UK and the US collaborate in science and innovation; including advanced defence technologies.

The White House had not formally announced the visit Trump said he had canceled, but the president was widely expected to attend a ceremony next month to dedicate the new embassy. Robert “Woody” Johnson, the U.S. ambassador to Britain and a friend of Trump’s, told the BBC last month he was optimistic about a visit in the new year.

Unlike other European leaders, British Prime Minister Theresa May initially went out of her way to extend a hand of friendship to the new Trump administration. She offered the president a full state visit just a week after his inauguration, prompting speculation that she was hoping to secure a good trade deal post-Brexit. But things have since grown strained.

Robin Niblett, the director of Chatham House, a London think tank, said that U.S.-British relations are “buffeted” by Trump’s moods. He noted that on some matters, such as the day-to-day business of security cooperation between the two countries, the relationship is good but that on big foreign policy issues — such as the Paris climate agreement or the Iran nuclear deal — it is tense.

“A personal relationship between Trump and May should be there to cover some of those differences in strategic approach, but it just can’t,” he said, adding that Trump is “constantly looking for new excuses not to come.”

Some foreign policy analysts in Washington suggested Trump and May could meet this year on the sidelines of summits in other countries, and one suggested Trump could visit a smaller city in Britain, perhaps one that included one of his golf resorts.

“It is extraordinary that the president of the United States cannot visit Britain over the fear of mass protests,” said Thomas Wright, director of the Center on the United States and Europe at the Brookings Institution in Washington. “That’s unprecedented.”

Julie Smith, a senior fellow at the Center for a New American Security who served as deputy national security adviser for Vice President Joe Biden, called it “a sorry state of play.”

“It says a lot about where our relationship is with the U.K. and how thin-skinned our president is,” she said.

Smith scoffed at the idea that Trump was worried about the cost and location of the embassy, noting that the move has been in the works for years.

The old embassy is in elegant Mayfair, an area dotted with foreign embassies and close to West End department stores. The area is full of residential buildings, and neighbors were apt to complain about the threat to their homes.

Robert H. Tuttle, who served as U.S. ambassador to Britain from 2005 to 2009, said he knew early on that the mission would need to move.

Johnson, the current ambassador, agreed that security concerns after Sept. 11, 2001, necessitated the move. The new, bigger embassy is in Nine Elms, a former industrial area in Battersea, south of the River Thames. It’s as close to Westminster as the old embassy.

Rena’s late husband, Ian Easton, was the head of British Defense Staff in Washington that has been working behind the scenes, making sure British and American interests are aligned. Our President has to take in the anti-war movement in both nations as he prepares to battle a common enemy. Rena has a unique perspective in regards to the men she has bonded with. Her worldview is extremely important. But she is a recluse. I bid her to dig deep and bring forth her dream of a beautiful world, yet to be. If WE give up now, then all that is ugly in the world, has won the war before it has begun. We must seize the day, and make over the world in our best image, for it is on the brink of ruin. their town.

Neither Brexit nor Trump are likely to bring great benefits to these voters. But at least for a while, they can dream of taking their countries back to an imaginary, purer, more wholesome past. This reaction is not only sweeping across the United States and Britain. The same thing is happening in other countries, including some with long liberal democratic traditions, like the Netherlands. Twenty years ago, Amsterdam was seen as the capital of everything wild and progressive, the kind of place where cops openly smoke pot (another myth, but a telling one). The Dutch thought of themselves as the world champions of racial and religious tolerance. Of all European countries, the Netherlands was the most firmly embedded in the Anglosphere. Now the most popular political party, according to the latest polls, is led practically as a one-man operation by Geert Wilders, an anti-Muslim, anti-immigrant, anti-European Union firebrand who hailed Trump’s victory as the coming of a “patriotic spring.”

Brexit Britain and Trump’s America are linked in their desire to pull down the pillars of Pax Americana and European unification. In a perverse way, this may herald a revival of a “special relationship” between Britain and the United States, a case of history repeating itself not exactly as farce but as tragi-farce. Trump told Theresa May that he would like to have the same relationship with her that Ronald Reagan had with Margaret Thatcher. But the first British politician to arrive at Trump Tower to congratulate the president-elect was not the prime minister or even the foreign secretary, Boris Johnson, but Nigel Farage.

Trump and Farage, beaming like schoolboys in front of Trump’s gilded elevator, gloated over their victories by repeating the same word that once made their respective countries exceptional: “freedom.” In the privacy of Trump’s home, Farage suggested that the new president should move Winston Churchill’s bust back into the Oval Office. Trump thought this a splendid idea.

Does this mean that Britain and the United States are no longer exceptional? Perhaps. But I think it is also true to say that the very idea of Anglo-American exceptionalism has made populism in those countries more potent. The self-flattering notion that the Western victors in World War II are special, braver and freer than any other people, that the United States is the greatest nation in the history of man, that Great Britain — the country that stood alone against Hitler — is superior to any European let alone non-European country has not only led to some ill-conceived wars but also helped to paper over the inequalities built into Anglo-American capitalism. The notion of natural superiority, of the sheer luck of being born an American or a Briton, gave a sense of entitlement to people who, in terms of education or prosperity, were stuck in the lower ranks of society.

WASHINGTON — In what is believed to be the first time since the 1940s, the entire British defense staff will be here March 25 to discuss long-range strategy and the impact of budget cuts with their U.S. counterparts, according to U.S. and British sources.
The meeting is reminiscent of the Combined Chiefs of Staff, when British and American military leaders joined forces during World War II. Both nations are undergoing significant budgetary reductions and will continue to rely on each other in future years for support. Understanding what capabilities will survive and won’t is essential to long-term strategic planning.

The Commandant of the Royal College of Defence Studies was a UK senior serving military officer between 1972 and 2001. The post rotated through the three branches of the armed forces in turn. In 1971 the old Imperial Defence College became the Royal College of Defence Studies. In 1991, the post was downgraded to three-star, and then in 2001, it was opened up to competition through public advertisement. Subsequent incumbents have as yet all been senior retired military officers.