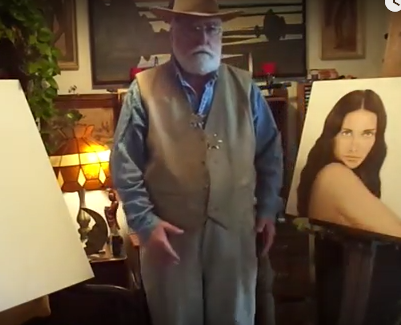 I saw this coming. I never touched Belle, except to feel the goosebumps on her arm. I haven’t seen Rena in forty-seven years. I don’t have her phone number or address. Belle forgot to tell me she does not want to hear from, and sent me an e-mail saying so – after her She-Demon declared WAR ON ME. I guess Rena declared war on me when she put Deputy Sheriff, Dan Wayland, on my trail. I am a reporter for my newspaper. I have been very topical, but, only I knew it.  All news folks and messengers want to be Seers. Very few are! My stock is way up. I am in the catbird seat!

In the first video below I thank Rena for one of the greatest stories of all time in regards to her claim I was stalking her. I now recall how her letter got to me. I found out she was the member of this church in Bozeman, and I wrote the pastor a letter asking him to give it to Rena if her felt that was appropriate. That there are two groups of Christian defending and opposing Roy Moore, is manifest in my right and left wing muses. This video was made three years ago, before Roy rode into our lives – forever.

An Alabama pastor who supports Senate candidate Roy Moore (R) blasted the allegations of sexual harassment against Moore, saying they’re part of a “war on men.”

“More women are sexual predators than men,” Pastor Franklin Raddish told AL.com. “Women are chasing young boys up and down the road, but we don’t hear about that because it’s not PC.”

If this blog is about anything, it is about the Showdown between Roy Moore, and Sheriff Two Stars in the Cultural Warfare Gun&Bible Battle of the century. I have already lost a half dozen of my Liberal Friends over this one, because they wanted to believe Jesus was good for us, even when wielded by a Conservative Maniac who piled sandbags around his bunk in Vietnam, lest he be fragged.

Here is the Evil Grunt that inspired Bill Cornwell’s father who fought me for my grandson, making me out to be a parasite and traitor. Taking away my offspring was justified because I had been an Anti-War Hippie Demonstrator in Berkley. I was a very Bad Man, because I took away some of that fake holy shine these Vietnam Warriors for Jesus wanted as they strut about with their chest stuck out, and a Bible crammed up the crack in their ass for safe-keeping as they destroy the Yellow Gooks!

Christianity affirms God’s love for the neighbor and care for the most vulnerable in society: the widow, the foreigner, and the orphan. But he has denigrated people from other countries and other faiths. He opposes the expansion of Medicaid which would provide basic healthcare for over 400,000 poor and working poor Alabamians. He seeks to deny the most basic civil rights of our fellow citizens.

An Alabama pastor who supports Senate candidate Roy Moore (R) blasted the allegations of sexual harassment against Moore, saying they’re part of a “war on men.”

“More women are sexual predators than men,” Pastor Franklin Raddish told AL.com. “Women are chasing young boys up and down the road, but we don’t hear about that because it’s not PC.”

The news organization spoke to Raddish as part of an effort to speak with every pastor that endorsed Moore before the allegations against him were made public. Nineteen of the 29 pastors who responded told AL.com they were still supporting Moore.

Dozens of other Alabama pastors signed on to a letter released Friday calling Moore unfit for office and accusing him of preaching “extremist values” while comparing him to politicians who have “cynically used Christianity for their own goals.”

The letter also takes aim at Moore for the sexual misconduct allegations against him, saying his actions serve to “reopen the wounds of anyone who has been abused by leaders who should have been committed to compassion, to justice, and to healing God’s world.”

Even before the recent allegations of sexual abuse, Roy Moore demonstrated that he was not fit for office, and that his extremist values and actions are not consistent with traditional Christian values or good Christian character. He and politicians like him have cynically used Christianity for their own goals. But Roy Moore does not speak for Christianity, and he acts in ways that are contrary to our faith.

Christianity affirms God’s love for the neighbor and care for the most vulnerable in society: the widow, the foreigner, and the orphan. But he has denigrated people from other countries and other faiths. He opposes the expansion of Medicaid which would provide basic healthcare for over 400,000 poor and working poor Alabamians. He seeks to deny the most basic civil rights of our fellow citizens. He has used racial slurs and casually referred to state-sponsored violence against lesbian and gay families. He has sought to deny children without parents access to loving families on the basis of sexual orientation. Kindness and justice toward widows, orphans, and foreigners are priorities in the Bible but they are not priorities for him.

Christianity thrives in religious freedom from government interference, and a government impartial toward people of all faith traditions. But instead he has sought to entangle government with religion. He has preached vehemently against Islamic religious law but he has sought government affirmation of his religious extremism and nationalism. He has claimed civil rights only apply to Christians.

Christianity rejoices in the truth and affirms the rights of abuse survivors to tell their stories without silencing. Christianity abhors sexual coercion and violence. We acknowledge that many people have been victims of sexual assault and abuse in our own places of worship. Clergy misconduct has done real and lasting harm, both physically and spiritually. We repudiate the actions of religious and political leaders like Roy Moore who have sought to silence, to cover up, and to be complicit in the sexual abuse. These actions reopen the wounds of anyone who has been abused by leaders who should have been committed to compassion, to justice, and to healing God’s world.

Why is this important?

We clergy write and sign this letter not as representatives of our own congregations but as individual faith leaders compelled by conscience to speak. Our intent is not to tell anyone how to vote, but to urge the people of Alabama to vote their conscience, regardless of political affiliation. It is our belief that in light of Roy Moore’s extremist beliefs, his patterns of behavior, and the recent allegations against him, no person of faith can, in good conscience, support him or his religious nationalism. He has done harm to our government; he has done harm to our Christian witness; and he has done harm to vulnerable people.

We do not make this statement lightly. We do so with much prayer and discernment. We believe no follower of Jesus Christ should be silent while the words of our Lord and Savior are perverted for partisan power, while our Bible is appropriated as a weapon for a false “culture war,” and while the name of our God is blasphemed by the hypocrisy of those who claim the name of Christ

From the pulpit to hospital rooms, from wedding altars to the funeral home, from the Capitol to our prisons, we are called to serve Jesus Christ in every area of life. With our calling comes a responsibility to address such compelling cultural issues as the special election for United States Senate. We have the opportunity this Tuesday, August 15, to send a man to Washington who shares our convictions, will fight for morality, and will restore integrity in the halls of Congress. That man is Judge Roy Moore.

America has never been in a more desperate position of needing a strong, principled leader than we find ourselves in today. Exodus 18:21 gives us wise criteria for selecting our public officials when it tells us to “… look for able men from all the people, men who fear God, who are trustworthy and hate a bribe, and place such men over the people…” In acknowledging that wisdom, Noah Webster wrote in 1837, “…let it be impressed on your mind that God commands you to choose for rulers just men who will rule in the fear of God. The preservation of a republican government depends on the faithful discharge of this duty; if the citizens neglect their duty and place unprincipled men in office, the government will soon be corrupted …”

This is a rare occasion where both opportunity and responsibility converge. We are privileged to shoulder this responsibility and vote on Tuesday to elect a senator who is able, who fears God, and who is trustworthy. Judge Roy Moore is uniquely qualified to represent us, fight for our values, and restore integrity and honor to our nation’s Capitol.

For decades, Roy Moore has been an immovable rock in the culture wars – a bold defender of the “little guy,” a just judge to those who came before his court, a warrior for the unborn child, defender of the sanctity of marriage, and a champion for religious liberty. Judge Moore has stood in the gap for us, taken the brunt of the attack, and has done so with a rare, unconquerable resolve.

As a consequence of his unwavering faith in God and his immovable convictions for Biblical principles, he was ousted as Chief Justice in 2003. As a result, he continued his life pursuit by starting the Foundation for Moral Law, which litigates religious liberty cases around our Nation. After being re-elected again to Chief Justice in 2012, by an overwhelming majority, he took another round of persecution for our faith as he stood up for the sanctity of marriage between one man and one woman.

You can know a man by his enemies, and he’s made plenty – from the radical organizations such as the Southern Poverty Law Center and the ACLU to the liberal media and a handful of establishment politicians from Washington. He has friends too, a lot of them. They live all across this great State, work hard all week, and fill our pews on Sunday. They know him as a father, a grandfather, a man who loves God’s Word and knows much of it by heart, a man who cares for the people, a man who understands our Constitution in the tradition of our Founding Fathers, and a man who deeply loves America. It’s no wonder the Washington establishment has declared all-out war on his campaign.

We are ready to join the fight and send a bold message to Washington: dishonesty, fear of man, and immorality are an affront to our convictions and our Savior and we won’t put up with it any longer. We urge you to join us at the polls on Tuesday, August 15th to cast your vote for Roy Moore.