There is a good chance Kevin is a co-founder of SLEEPS. Hollis, Kevin, and myself lived within fifty feet of each other in the alley between 18th. and 19th. – FOR YEARS!  He knew Alley Valkyrie – well. I went to a Wiccan event that Kevin organized. In this video Kevin shows me how to draw a rose. Kevin wrote all the statements we see at SLEEP events. That is his blue bi-cycle against the wall. He explains how his image represents VENUS. What?? Venus is holding a ROSE on the Grateful Dead album, from which a MUSician plays a song from, when I beheld BELLE……………..Rosebelle!

Don’t you see, we have been captured, caught up in a mystery from which there is no escape – as yet! That is Ambrose, Belle’s lover at the time we met, wearing a blue crazy shirt. Alley should have passed my photo around amongst The Founders, to see if I am connected. A huge mistake was made. But, this is how all Marshall Arts movies start.

I scolded Belle for playing games with the real art world. Da Vinci’s ‘Salvator Mundi’ was just sold for $450 million dollars, and is now the only work of the master in private hands. 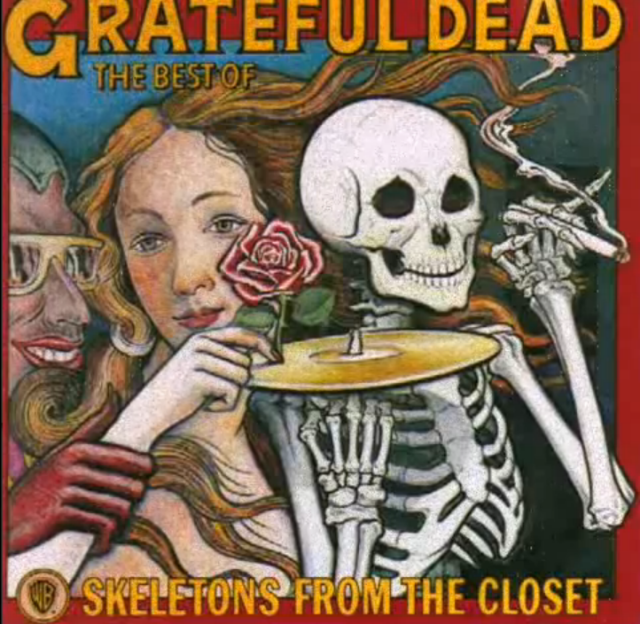 I just discovered a video of Kevin making a image he titled “Venus” at the Eugene Art Walk shot in September of 2013, seven months before I met Belle Burch. This is uncanny. Kevin refers to my Rose Cross study, and draws a rose. A beautiful woman let me take a photo of her because I was looking for a model for Fair Rosamond. Kevin knew Belle and Ambrose and took part in SLEEPS demonstrations.

Kevin lived in an apartment next to me for over ten years. I shared my study with him. He thought I was a Rosicrucian. I now understand we are in contact with the other side, very possibly with the Grateful Dead. All this (automatic) writing with chalk.

I can find no description of the devilish man holding Venus’s arm. He looks like Kevin who told me he was a Wiccan, and invited me to Eugene’s first Wiccan Fair held down by the river. He was painted by an artist of Dutch ancestry, John Van Hamersveld.

This is proof I did not target and stalk Belle Burch. I am an artist who went in search of a model at the Art Walk. Note the accordion music in the background of my interview with Jill and Belle. You can see the musicians. They look like sisters. Jill says she is a ‘Fitness Fanatic’. So is Belle – and Venus! Uncanny! 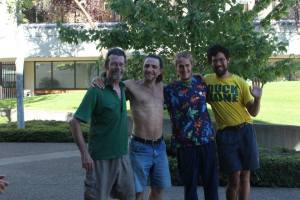 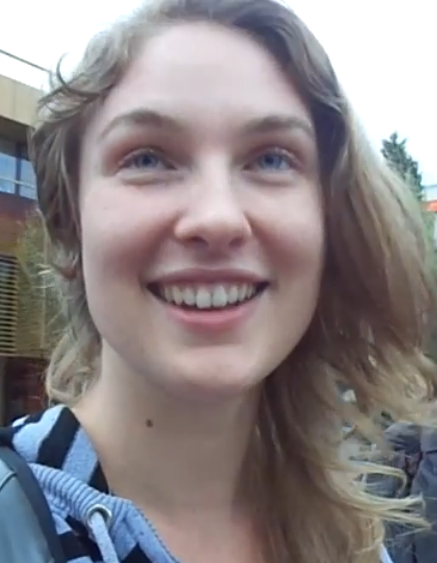 Belle, my big project in Love Dance, a Broadway musical based upon the music of LOVE. Bryan was my best friend in HS. He was a roadie for the Byrds when he was 17. We hung out in a coffee shop in LA in 1963.

I about choked when you told me your were a dancer! Belle! You ring all my belles and set off all my whistles. It is just the way it is.

I want to see the hippie dance extravaganza on Broadway! How about you?

On Friday, I found her, at the Art Walk. I was filming a magical singer in Ken Keasy Square when I got a glimpse of her thru my lens. I come in for a close-up, and I gasp! Here she is, my model for Fair Rosamond that I have been searching for ever since I declared I was a Pre-Raphaelite in 1969. As an original hippie, I had always had long hair, but, now I was not holding back. I now carried a palette, my shield, and a brush, like a Knight’s Sword.

My hero, Dante Gabriel Rossetti had his Muse, Siddell, pose for his version of Fair Rosamond, but this image lacks refinement and good breeding. My Rosamond had to have a regal profile, a strong chin, and an angelic mouth. She would be more handson, than pretty. I did not want a poser, but a powerful personality that took risks. She had to be as radical as her paramour, King Henry FitzEmpress, the son of Geoffrey de Anjou. From Henry and Queen Eleanore were born the Plantagenets who would lauch the War of the Roses.

She must have felt my energy directed at her, for even though I used two singers as my human shield, a beautful women can feel the eyes of an admirer. She raises her lovely hand and waves me off. But I persist. And, now she makes her way to me. She has to know what I am up to. I pretend I do not see her coming my way. This is a musical, an ancient dance.

Please view the first two videos. Be patient before you behold her. At the corner of Floral Drive and Fairmount I have an epiphany. I knew I was weeks away from beholding her. She had to appear.

All of a sudden we are exchanging words, names, and ideas. I tell her about the family legend, and our friendship with Joaquin Miller who co-founded the Bohemian Club. She stops my narrative.

I am aghast! No man has ever had such great fortune. I was convinced I would die before I met a woman who knew what a Bohemian was. Not only did she know the meaning, she wanted me to take her to this club – NOW!

I told this beautiful young woman Joaquin gathered artists, poets and writers at ‘The Abbey’ a salon in the Oakland Hills he also called the Hights.

“We should found a Bohemian Club here in Eugene!” I suggested and her eyes were twinkling with mischievousness. This is a young woman who loves thinking outside the box. Here is – Belle Companion!

“I am a radical!” She informs me. And I clutch my heart.

“Me too! Has anyone ever painted you? I would like to paint your portrait.”

“Someone did a drawing of me, but, I always wanted my portrait done.”

This conversation occurred after I turned my camera off because I did not want it to come between us. Her reaction to me telling her what my blog is about, is the end of my novel ‘Capturing Beauty’, for she captures me, takes my name and my number.

We speak the same timeless language.

I have already done one sketch of her looking down at her cellphone, her beauty fingers taking my name and capturing it. This is Fair Rosamond. At her spinning wheel, making flax threads for her embroidery. Here is the end of the clue of the Rouge Thread. Here is the splicing of the Rosy Quest to the thread that carry on the dream into the future.

My work is done. The Master has found his Apprentice – already doing the good work, and looking for a good and gallant deed to do! She knows who I am. She has been looking for me for a long time.

From Belmont, to Fairmount, my kindred have come to plant the kiss. Belle, my Beautiful Belle, is awake! And my heart, my mind, and my Bohemians Soul… soars! I am in love with my Muse. I always have been.

In the last video she is surrounded by beautiful old crones under the S of the Pepsi sign. How many, I dare not count lest I be whisked away the Land of the Living Grimm’s Fairytales. Then, the crone who has been concealing her, moves aside, and a curtain that has been closed, opens. I am on pins and needles to see her eyes. When I do, the sleeping kingdom is awoken. From a across the courtyard I give her a little kiss.

The painting above is titled ‘Lady Lilith’ by Dante Gabriel Rossetti. A Lily, and a Rose.