The author of the Oera Linda books, is not known – for sure! However, it is said a murderer revisits the scene of his/her crime, and, a clue is left behind. In this case let us look at the two main protagonists of this Atlantean tale, Jon, and Rosamond. Now, combine the names. Is this too easy?

A man married to a woman with a Rose name, can assume the name Rosamond. My mother was Rosemary Rosamond. Several of her kindred assumed the name of Francis Marion, ‘The Swamp Fox’ who Samuel and James Rosamond fought under in the War of Independence  – from the royalty of Britain – where the Maze of Blenheim Palace is found.

A week ago I found Rosamund Jane Frances Spencer-Churchill. Her mother named her after Fair Rosamond who was kept in the Maze at Woodstock. Follow the Clue of the Red Thread………….Henry Brevoort, Washington Irving, and, Sir Walter Scott.

I am the Great Sleeper from the past – and future! I, Jon Francis Marion Rosamond, designed Atland – that has risen, as I have risen! I have come to show you the Lost Way! I am looking for a great attorney of law so that I might come to own the 1.7 billion dollar fortune gathered in the Beryl Buck Foundation – that I know she wants me to own, so we, can build our dream!

Isaac Singer was an actor in plays. His son, Paris Singer was Isadora Duncan’s lover. The president of Singer built Fair Rosamond’s castle on Dark Island. Very wealthy people associated with the Vanderbilt’s, have been constructing the Frisian Atlantis – and they know not what they do! Only the Master Builder can bring all the pieces together! My blog is my book, and The Project. I am a Genetic Architect.

I found my kindred soul in the video below. Frisians and Swan Brothers. The Rosamond family fought alongside William of Orange, and came to Canada and the United States where we lived in Appalachia and adopted Hillbilly names. Bennett Rosamond was the Grand Master of the Orange Lodge in Canada.

William III (Dutch: Willem; 4 November 1650 – 8 March 1702),[2] also widely known as William of Orange, was sovereign Prince of Orange from birth, Stadtholder of Holland, Zeeland, Utrecht, Gelderland, and Overijssel in the Dutch Republic from 1672, and King of England, Ireland, and Scotland from 1689 until his death. It is a coincidence that his regnal number (III) was the same for both Orange and England. As King of Scotland, he is known as William II.[3] He is sometimes informally known in Northern Ireland and Scotland as “King Billy“.[4]

KALTA AND THE ORIGINS OF THE CELTS

This chapter is the story of Rosamond, Kalta and the early years of Minerva however standard history has very little to say about these historical personages. Their influence on the course of Europe and the Mediterranean was enormous, affecting everything that has followed for thousands of years. Of Rosamond nothing is known except for a namesake, Fair Rosamond, the mistress of King Henry II who has been endowed with many legends and dubious stories beyond her station.

We now come to the History of Jon.
Jon, Jôn, Jhon, Jan, are all the same name, though the pronunciation varies, as the seamen like to shorten everything to be able to make it easier to call. Jon—that is, “Given”—was a sea-king, born at Alberga, who sailed

Around 1871 the Fernham estate in Paignton was purchased by Isaac Singer, the founder of the Singer Sewing Machine Company. The old buildings on the site were demolished and he commissioned a local architect, George Soudon Bridgman, to build a new mansion as his home. As part of the designs, Singer instructed Bridgman to build a theatre within the house. Bridgman was at that time being apprenticed by a young Frank Matcham who had just returned from London where he had been studying architecture in a surveyors office.[1] In an edition of The Builder, dated 1873, Matcham was named in the request for tender section as being the accepted party to work alongside Bridgman on the Oldway Mansion project.[2] The architectural historian Gorel Garlick considers it entirely possible that Matcham was given sole responsibility by Bridgman for the theatre’s design because of his educational experiences in London.[1] Singer spared no cost in terms of Oldway Mansion’s construction; he sourced the finest materials from around the world and instructed Bridgman to design the interior in exuberant French style. Garlick notes that it was highly likely that Singer’s exuberance would have influenced someone as architecturally impressionable as Matcham whose later theatres used such extravagant decoration.[1] The work was completed in 1873;ref name=NHLEHouse>Historic England, “Oldway Mansion (house) (1195207)”, National Heritage List for England, retrieved 2 October 2017 </ref> Singer died on 23 July 1875, shortly before work on the original mansion was completed.[3]

The grand staircase at Oldway Mansion with The Crowning of Josephine by Napoleon after David.

Paris Eugene Singer, Isaac Singer’s third son, supervised the alterations at Oldway Mansion between 1904 and 1907.[4] The rebuilding work was modelled on the Palace of Versailles,.[5] and the eastern elevation of the building was inspired by the Place de la Concorde in Paris.[6] The interior of the building is noted for its grand staircase made from marble and balusters of bronze..[5] The ceiling of the staircase is decorated with an ornate painting based on an original design for the Palace of Versailles for Louis XIV by the French painter and architect Charles Le Brun.[5]

Above the grand staircase there is a reproduction of the first version of Jacques-Louis David‘s painting The Crowning of Josephine by Napoleon..[5] The original was purchased by Paris Singer in the late 19th century. The painting was sold to the French government in 1946 and now hangs in the Palace of Versailles.[7][5] The reproduction at the mansion, which is in the same place as the original, is a copy made by Rutters Scanachrome and was unveiled in 1995.[8]

The gallery on the first floor is a reproduction of the Hall of Mirrors in Versailles, and is floored in parquet.[5] The gallery leads into the ballroom, which contains walls of gilt panelling and mirrors. Above the fireplace there is an oil painting of Louis of Bourbon dating from 1717.[5]

Born before 11 Jan 1693 in Flatbush, Province of New York

Frances Anne Spencer-Churchill, Duchess of Marlborough VA (15 April 1822 – 16 April 1899) was an English noblewoman, the wife of British peer and statesman John Spencer-Churchill, 7th Duke of Marlborough. One of her sons, Lord Randolph Churchill was the father of Prime Minister Sir Winston Churchill. She had a total of 11 children, and her principal home was the monumental Blenheim Palace, which she rejuvenated with her “lavish and exciting entertainments”,[1] and transformed into a “social and political focus for the life of the nation”.[2] She was invested as a Lady of the Royal Order of Victoria and Albert[3] for her efforts at famine relief in Ireland. 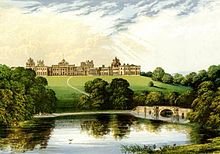 An 1880 engraving of Blenheim Palace

On 1 July 1857, her husband succeeded to the title of 7th Duke of Marlborough, and from that date henceforth, Frances was styled Duchess of Marlborough. She was a commanding and hot-tempered woman described in The Complete Peerage as a “woman of remarkable character and capacity, judicious and tactful”. Her face had more strength than beauty and her eyes were either warm or hard, never lacklustre.[5]

She ruled Blenheim Palace and its household with an iron hand; yet it was she who rejuvenated the palace with her lavish and gay entertainments which she herself organised; transforming the palace “into a social and political focus for the life of the nation”.[2]

She was a domineering yet devoted mother; both of her surviving sons’ marriages were a disappointment to her. Her eldest son George married a woman described as stupid, pious and dull,[5] while her youngest and favourite son, Lord Randolph earned her displeasure by marrying, against the wishes of both herself and the Duke, American socialite Jennie Jerome, whom Frances openly disliked.[6]

Frances and her husband refused to attend Lord Randolph and Jennie’s wedding at the British Embassy in Paris, which took place on Frances’s 52nd birthday. Like the rest of the 19th-century British aristocracy, the Marlboroughs regarded American women as “strange and abnormal creatures with habits and manners something between a Red Indian and a Gaiety Girl“.[5] When the newly-wed couple moved to their home in Curzon Street in London, Frances arrived to help Jennie pay her first visits to the leaders of London society. She lent her some of her own jewels for the occasion, and the two women travelled in the Marlborough family coach.[7] Frances featured largely in the lives of the younger members of the family, including her grandson Winston, to whom she often acted as a substitute mother.[2]

From 1876 to 1880 her husband served as Lord Lieutenant of Ireland. As the result of her diligent efforts at famine relief in which she displayed humanity, proficiency and leadership that served to avert the effects of the 1879 Irish potato famine, she was invested as a Lady of the Order of Victoria and Albert by Queen Victoria.[2] 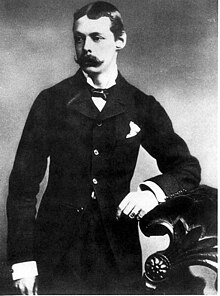 Lord Randolph Churchill, the youngest surviving son of Frances and the Duke

She became a widow in 1883, lost her eldest son, George, in 1892, and on 24 January 1895, her only surviving son, Lord Randolph Churchill, died at her London home in Grosvenor Square. She never stopped mourning Randolph, and harboured much resentment against his wife, whom she had never liked and now criticised for behaviour unbecoming a grieving widow.[citation needed]

Frances died at Blenheim on 16 April 1899, the day after her 77th birthday, having outlived five of her eleven children. She was buried on 21 April 1899 in the family vault beneath Blenheim Chapel. Her grandson Sir Winston Churchill wrote of her: “She was a woman of exceptional capacity, energy and decision”.[5]

1 Response to Jon Rosamond – The Atlantean