I have seen the future! Yeeeeeehaaaaw! I too have been cyber-bullied! I will write to Rob Quist, and the Governor of Montana, about my grandfather and the artistic legacy I carry on. The vision of the Art Festival coming to Bozeman, has come true!  Rob was the head of the Montana Arts Council for eleven years. He wants artists to come live in his State. My videos are works of art.

Democrat Rob Quist, 69, is a bluegrass and country singer-songwriter, a former member of the Montana Arts council, and a small business owner. A Bernie Sanders-esque populist candidate who frequently performs at an Idaho nudist resort, Quist toured the country with the Mission Mountain Wood Band before moving to a horse ranch in rural northwest Montana.

Quist narrowly defeated former U.S. Senate candidate Amanda Curtis at the party’s convention in March in four ballots. His past financials are under scrutiny, as he underreported his personal income by $57,000 on federal financial disclosures, according to the AP. He also defaulted on a loan, failed to pay a contractor he hired and had multiple delinquent tax payments, according to the AP.

Robert “Rob” Quist (born January 5, 1948) is an American singer, guitarist, banjo player, award-winning songwriter, and politician. His songs have been recorded by artists Michael Martin Murphey and Loretta Lynn among others. He is known as a Musical and Cultural Ambassador for the state of Montana and was appointed to the Montana Arts Council by Governor Brian Schweitzer. He has toured extensively throughout the United States, Canada, and Japan.[1] He is the Democratic nominee for Montana’s House seat in the 2017 special election.[2]

Born January 5, 1948 in Cut Bank, Montana, Quist began playing banjo and singing at a young age. As a high school senior he led the Cut Bank Wolves to the 1966 Class B Boys State basketball championship under coach Willie Degroot before playing basketball at the University of Montana and joining the Jubileers singing group. While in the Jubileers he met Steve Riddle, and the two decided to form a band which eventually evolved into the Mission Mountain Wood Band.

The Mission Mountain Wood Band were primarily responsible for bringing Woodstock-style happenings to Montana. The group toured nationally and appeared with many notable acts of the era. They were featured in TV spots for Hee Haw and the ABC Cheryl Ladd Special. After the band broke up in 1982, Quist joined with fellow members Terry Robinson and Kurt Bergeron to form the Montana Band, which continued to tour relentlessly and took first prize in the Willie Nelson country challenge. Quist took some time off the road to focus on songwriting.

Quist formed a backup band called Great Northern and now tours and performs as “Rob Quist and Great Northern.” He periodically reunites with the surviving members of the Mission Mountain Wood Band for a small number of concerts.

Rob Quist and Great Northern have performed his original music with the North Dakota State Symphony, the Fairbanks Alaska Symphony, the Glacier Orchestra as well as the Billings, Butte, Helena and Missoula Symphonies. He has written and recorded national television and radio ads for Levis 501 Jeans, AMTRAK’s Empire Builder and Original Coors. His original song, “Blue Jean Love Affair” was heard in the Top 20 Country Music Markets.[3]

During a stint in Nashville, Quist forged a songwriting partnership and enduring friendship with Michael Martin Murphey. Their partnership culminated in their song “Close to the Land” which became the theme song for the American Public Television program “America’s Heartland.” The song went on to win Song of the Year at the Texas Music Awards. His original song “America…Pass It On” and video featuring Jack Gladstone won a Finalist Award at the International Wildlife Film Festival for National Geographic, and is receiving airplay on Public Television and is currently featured at many Interpretive Centers throughout the United States. He has released 15 CDs of mostly original music about the lives and history of the people of Montana and the West, placing his songs on Billboard and Independent Charts. Quist received airplay in Great Britain, Belgium, Italy, Japan and Switzerland. He has shared the stage with many musical giants such as Tim McGraw, Martina McBride, Dolly Parton, Heart, The Allman Brothers, and Jay Leno, and others.

Quist has been featured on CBS National News in a segment called “Country Comes to New York”; he was a guest artist on the Riders in the Sky national radio show “Riders Radio Theater” as well as Montana Public Television. He composed original music for the Montana Repertory Theatre Production “Voice of The Prairie” and currently writes original songs for a new production about rodeo in present-day Montana, tentatively titled “Cowboy Up.”

Quist was one of the first honorees to be inducted into the University of Montana School of Fine Art’s “Hall of Honors”, saluted as “a celebrated Montana musician and composer who has captured the spirit of the West in his music, an evocative and versatile artist whose gift of song has touched the hearts and souls of his countrymen, an eloquent proponent of the history and beauty of the West whose legacy in song will be embraced by generations to follow.” 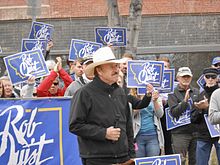 Quist at a campaign rally

On January 4, 2017, Quist announced he would seek the Democratic nomination for the special election that was anticipated to fill the Congressional seat held by Ryan Zinke, as Zinke was expected to be nominated to be Secretary of the Interior. Quist was endorsed early on by former Governor Brian Schweitzer, and was selected as the Party’s nominee on March 5.[4][5] Quist stated, “I was approached by people who I really respect and they asked me to run. And my first thought was ‘Wait a minute, I’m not a politician.’ Their response was, ‘exactly.’” Quist cited as qualifications his work with the state government, lifelong experience traveling in and around Montana, and his upbringing in a ranching family.[6] Independent Senator and 2016 Democratic Party presidential primary candidate Bernie Sanders endorsed Quist in the race and campaigned for him.[7]

The special election was announced by Governor Steve Bullock on March 1 and set for May 25, the minimum 85 days required after Zinke’s confirmation.

Politico described Quist’s policies as “an economic fairness platform” and “a commitment to Montana’s particular brand of prairie populism.”[8] According to the Washington Post, the Quist campaign opted not to turn the special election into a referendum on Trump’s alleged scandals, but to focus on “policy decisions by the president and congressional Republicans.”[9]

Quist supports the Affordable Care Act (Obamacare) and thinks the country should eventually move to a single-payer healthcare system.[10][11] Quist opposes the American Health Care Act (AHCA), the House Republican bill to repeal the Patient Protection and Affordable Care Act (Obamacare).[12] Quist said that AHCA “will raise healthcare costs for working Montanans”, which is consistent with an analysis by the Kaiser Family Foundation.[12] Quist has described AHCA as a “tax cut for millionaires”.[13]

Quist has criticized inequality in the United States, and argued that tax breaks for the rich exacerbates the inequality.[14] He has called for tax cuts for the working class.[15] He opposes a provision of AHCA that would give tax breaks to insurance executives.[11]

He opposes the privatization of federal lands, military intervention and regime change, as well as any form of religious ban or registry.[16][14] Quist has called for transferring money from the federal military budget “towards health care or Social Security”.[17] Quist supports a constitutional amendment to overturn the Citizens United Supreme Court decision.[18] He has called for investments in clean coal technology, as well as energy from wind, solar, biomass and geothermal sources.[19]

Quist accepts the scientific consensus on climate change and supports actions to mitigate climate change, saying climate change “could have a serious impact on our farms, ranches, and our economy.”[19] Quist supports the legalization of marijuana, saying “the war on drugs has been an abject failure.”[20]

Quist supports access to birth control, preventive screenings and abortion rights.[16] Quist has argued that “the assault on women’s reproductive rights” must come to an end.[

1 Response to Rob Quist of Montana