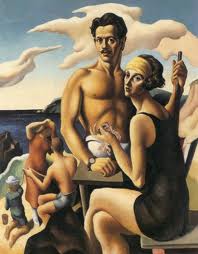 Tonight I watched a film by Ken Burns about the artist Thomas Hart Benton. Thomas was a man who loved to drink and give his opnions to anyone who would listen.

Although he’d been to soirées in “Paree” and New York’s Stork Club, American artist and muralist Thomas Hart Benton played a harmonica and reveled in his self-honed image as a hard-drinking hillbilly. Detractors, both past and present, dismissed Benton’s art as “Okie baroque”, while supporters praised his efforts to paint realistic images based on American subject matter. During Benton’s long life (1889-1975), he constantly moved people to tears — tears of rage as well as love.

“We have the struggle of any artist laid bare before us — its promise and its failures,” says filmmaker Ken Burns, who considers Benton “a perfect mirror of the American character,” warts and all. On the “good side” were ambition, talent and…