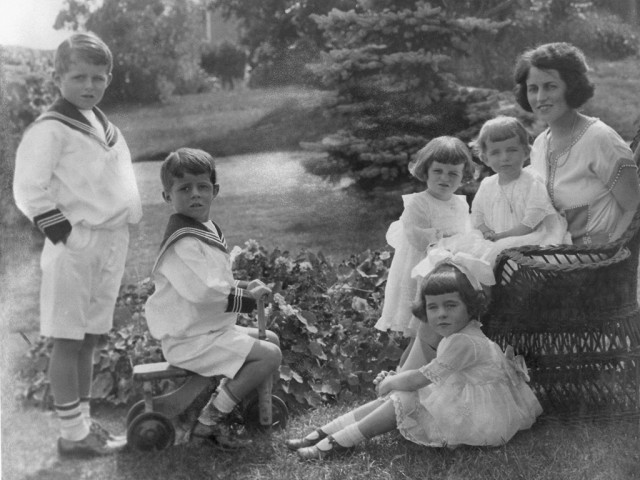 The top photo shows Rose with five of her children, then, the Kennedy Clan, and, photos of my aunt June and Bonnie. Their mother made hats for a living. She raised six children by herself. My mother, Rosemary on the right, and her sisters.

The Election of John Kennedy as the first Catholic President of the United States, was a mind-altering experience for the Presco-Rosamond family, for we were Catholics on my mother’s side, she given the name Rosemary Rosamond, when Mary Magdalene Rosamond, gave birth to her third daughter, of four. June, Bonnie, Rosemary, and Lillian we beautiful Irish lasses. Our mother pointed out the name of Jack’s mother who was named Rose. Rose had a daughter, Rose Marie Kennedy.

Rosemary insisted we go see JFK as he rode thru downtown Oakland, a stop on the campaign trail. There was a halo around his head. When he became President, Rosemary and her children felt we had someone on our side, and, our foturnes had changed. Everything was coming up roses.

Mary Magdalene hated Richard Nixon, and swore at him in German. She was born into a famous Catholic German family in Iowa. Our brutal German father was deposed. Jack was our man. When he reached out to black people, we had hope. When he founded the Peace Corp, we wanted to go to Europe.

The day after Women marched all over the world, I wondered if any newsperson could throw a damp washrag on the event. We were shocked to hear Kayleigh McEnany say the pro-choice rights of women had spoiled the event.

“It’s pro-choice groups who limit the rights of women and that’s the right to life.”

“McEnany enraged a few members of the all-female panel during a discussion on anti-choice groups feeling they weren’t welcome at Sunday’s march, as the Trump backer pushed back at comments from Democratic consultant Symone Sanders.

“How so, Kayleigh?” Sanders interrupted.

“No, I listened the whole time!” McEnany shot back. “The pro-choice groups are the ones limiting the right to life for millions of unborn babies who are slaughtered to the tune of half a million each year. Those are the groups who are rolling back the rights of women, and you want to talk about this [Trump] administration rolling back the rights of women? No. Not so. This administration wants to put in place paid maternity leave.”

Rose Kennedy was a devout Catholic. It appears Kayeigh is as well. Paul Weyrich invented the Fake Abortion Political Weapon that appears to give the Republicans the moral high ground. Appearences mean everything to the Trumpettes, those Redneck Babes down in those Red States, who will screw a 500 pound neo-Confederate -for a beer! Then, its off to church to hear your minister say the South will rise again, and cast down those Baby Killers who don’t care about Civil Rights!

Why did Trump win the white women’s vote? Why did white Democratic men up north, vote for Trump? I was trying to figure out what was missing in the campaigns of Hillary and Bernie……they did not mention the Kennedys. Every five years there arise a new age limit of voters. You have to keep them informed, and up to date. They want to be part of a moral tradition, whether they know it or not.

“Let’s remember, he said animatedly, that the Religious Right did not come together in response to the Roe decision. No, Weyrich insisted, what got us going as a political movement was the attempt on the part of the Internal Revenue Service (IRS) to rescind the tax-exempt status of Bob Jones University because of its racially discriminatory policies.”

McEnany was educated at the Academy of the Holy Names,[3] a private Catholic college preparatory school for girls (co-educational up to eighth grade), in the city of Tampa in western Florida, followed by Georgetown University School of Foreign Service with a Bachelor of Science in Foreign Service (BSFS) in International Politics, in Washington, D.C.[4] She also spent a year studying at St Edmund Hall, a constituent college of the University of Oxford,[5] in Oxford, England. McEnany studied at the University of Miami School of Law and then transferred to Harvard Law School where she received her JD degree in May 2016.[6]

Countess Rose Elizabeth Fitzgerald Kennedy (July 22, 1890 – January 22, 1995) was an American philanthropist and socialite. She was deeply embedded in the “lace curtain” Irish Catholic community in Boston, where her father was mayor. She was the wife of businessman and investor Joseph P. Kennedy Sr., who was United States Ambassador to the Court of St James’s. Their nine children included President John F. Kennedy, Senator Robert F. Kennedy, and longtime Senator Ted Kennedy. She was the sixth American woman to be granted the title of Countess by the Vatican.[2]

Neither term was complimentary. Aside from financial status, the term “lace curtain Irish” connoted pretentiousness and social climbing, while the “shanty Irish” were stereotyped as feckless and ignorant.[2] As lace curtains became commonplace in Irish-American working-class homes, “lace curtain” was still used in a metaphorical, and often pejorative, sense. In the early 20th century, James Michael Curley, a famously populist Boston politician who was called “mayor of the poor”, used the term “cut glass Irish” to mock the Irish-American middle class, but the term did not catch on.[3]

Irish Americans who prospered or married well could go from “shanty Irish” to “lace curtain Irish”, and wealthy socialites could have shanty Irish roots.[2] John F. Kennedy, for example, is considered “lace curtain” even though his grandparents were poor immigrants.[4]

The term “shanty” is of Gaelic origin,[1] and many poor Irish tenant farmers lived in one-room cabins. “The Irishman’s Shanty”, a 19th-century comic song, describes a stereotypical Irishman’s quarters:[5]

He has three rooms in one, kitchen, bedroom, and hall,
And his chist is three wooden pegs in the wall:
Two suits of owld clothes make his wardrobe complete,
One to wear in the shanty, that same for the street.

The occasional malapropisms and left-footed social blunders of the upwardly mobile “lace curtain” Irish were gleefully lampooned in vaudeville, popular song, and comic strips such as Bringing Up Father, starring Maggie and Jiggs, which ran in daily newspapers for 87 years (1913 to 2000).[6][7]

In James T Farrell‘s novel trilogy Studs Lonigan (1932–1935), which is set in an Irish-American Chicago neighborhood during the early twentieth century and the Great Depression, the father of Studs refers to their pompous neighbor Dennis Gorman as “Stickin’ up his nose and actin’ like he was high-brow, lace-curtain Irish.” Other, usually derogatory, references are made to “lace-curtain Irish” throughout the novel, and at one point Studs is jokingly greeted by his friends as “Shanty Irish Lonigan.”[8]

In The Departed (2006), Staff Sergeant Dignam repeatedly points out the dichotomy between the lace curtain Irish lifestyle Billy Costigan enjoyed with his mother, and the shanty Irish lifestyle of Costigan’s father.[9]

“Lace curtain” Irish Americans were seen by some as betraying their Irish roots and currying favor with White Anglo Saxon Protestants. “To be genuinely Irish is to challenge WASP dominance,” wrote California politician Tom Hayden.[10] The depiction of the Irish in the films of John Ford was a counterpoint to WASP standards of rectitude. “The procession of rambunctious and feckless Celts through Ford’s films, Irish and otherwise, was meant to cock a snoot at WASP or ‘lace-curtain Irish’ ideas of respectability.”[11

Rose was born at 4 Garden Court[3] in the North End neighborhood of Boston, Massachusetts. She was the eldest of six children born to Boston Mayor John Francis “Honey Fitz” Fitzgerald (1863–1950) and Mary Josephine “Josie” Hannon (1865–1964).[4] Her siblings were Mary, Thomas, John Jr., Eunice, and Frederick.

As a young child, she lived in an Italianate/Mansard-style home in the Ashmont Hill section of Dorchester, Massachusetts and attended the local Girl’s Latin School. The home later burned down, but a plaque at Welles Avenue and Harley Street proclaims “Rose Fitzgerald Kennedy Square”. The plaque was dedicated by her son, Senator Ted Kennedy, on her 102nd birthday in 1992.

Kennedy studied at the convent school Kasteel Bloemendal in Vaals, The Netherlands, and graduated from Dorchester High School in 1906. She also attended the New England Conservatory in Boston where she studied piano. After being refused permission by her father to attend Wellesley College, Fitzgerald enrolled at the Manhattanville College of the Sacred Heart (as it was then known) in Manhattan, an institution that did not grant degrees at the time. In 1908, Fitzgerald and her father embarked on a tour of Europe. She and Honey Fitz had a private audience with Pope St. Pius X at the Vatican. 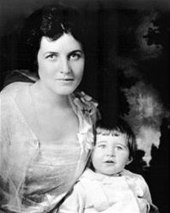 On October 7, 1914, she married Joseph Patrick “Joe” Kennedy at age 24 after a courtship of more than seven years. He was the elder son of businessman/politician P. J. Kennedy (political rival of Honey Fitz) and Mary Augusta Hickey. She gave birth to the couple’s first child, Joseph Jr., nine months later. They initially lived in a home in Brookline, Massachusetts that is now the John Fitzgerald Kennedy National Historic Site, and later a 15-room vacation home at Hyannis Port on Cape Cod, which became the Kennedy family’s lasting base. They had nine children. 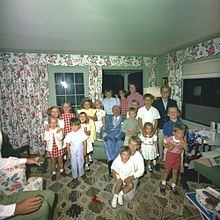 Rose Kennedy (standing, rear) with her husband Joseph P. Kennedy Sr. and grandchildren, 1963. John-John can be seen in the foreground.

Joseph provided well for their family, but was unfaithful. His affairs included one with Gloria Swanson. While eight months pregnant with the couple’s fourth child Kathleen, Rose temporarily went back to her parents, but returned to Joseph. In turning a blind eye to her husband’s affairs, Rose depended heavily on medication. Ronald Kessler found records for prescription tranquilizers Seconal, Placidyl, Librium, and Dalmane to relieve Rose’s nervousness and stress, and Lomotil, Bentyl, Librax, and Tagamet for her stomach.[5]

Rose Kennedy was a strict Catholic throughout her life. Even after her 100th birthday, she rarely missed Sunday Mass and maintained an “extremely prudish” exterior. Her strict beliefs often placed her at odds with her children.[6] Jacqueline Kennedy described her mother-in-law in her correspondence to Father Joseph Leonard, an Irish priest: “I don’t think Jack’s mother is too bright – and she would rather say a rosary than read a book.”[7]

Rose Kennedy stated that she felt completely fulfilled as a full-time homemaker. In her 1974 autobiography, Times to Remember, she wrote, “I looked on child rearing not only as a work of love and a duty, but as a profession that was fully as interesting and challenging as any honorable profession in the world and one that demanded the best I could bring to it….. What greater aspiration and challenge are there for a mother than the hope of raising a great son or daughter?”[6]