There is already talk of more gridlock in our Government if Hillary, a woman, becomes President. In the last five months I have talked about founding the New Turners within the Republican Party. The Turners were European gymnasts who fled to America after losing their revolution against the Papal forces of the Habsburg Empire headed by royals who took the titles King and Queen of Bohemia. There was no lewd locker room talk amongst the Turner Societies that founded our Physical Education programs. Indeed, they built Halls were members may share the newest ideas of the times. Reading, holding debates, and playing music introduced European Culture to America. In looking at the voting map, one sees that the red states that back Trump, is the Old South. Here many white men hold on to the bigoted past, claiming other races are out to wipe out their history. This fear gave rise to Donald Trump, who has all but destroyed the Republican Party founded by my kindred, Jessie and John Fremont.

With the discovery of Mary White Ovington, a socialist co-founder of the NAACP, I would like to form a new secular wing of the Republican Party, that esteems the contributions of the European who founded our Democracy. There is talk of Clinton taking Georgia. I believe the Republicans should return to their roots, and restart the history of the South – that should have been, if Reconstruction was not so severe and unacceptable. Under the New  Secular Turners, the Red States can write their own ticket, and get the United States out of its gridlock that is weakening us as a world power.

Putin is moving into Syria while we fight to the death with the Evangelical Taliban, that must be moved to the side of the road, and eventually forced to found their own party bent on promoting the strange religious ideas born in Ireland in 1840 by a Catholic renegade. This cosmology has created a real identity crisis among white people, and, divided our nation. This is not what the true Jesus wanted, or God. We can, and must create a Middle Ground, a Common Ground where constructive ideas are share for the good of all. I see The New Secular Turners spreading unity in Europe – and Russia! The Kurds need a United and Sane America so they can defeat ISIS.

Many German Jews became Turners and carried their ideas to old Judea, where they eventually founded the Nation of Israel. May I suggest Bernie Sanders become a New Turner and carry an esteeming message to young men and women of the South.

I saw a map of the United States if only American Women voted, it was all blue but for the few states. We need a worldwide Emancipation of Women.

These days, being a Republican and supporting your presidential nominee can be a lonely place. A new USA Today survey finds that more than a quarter of top elected GOP officials won’t endorse or have rescinded their endorsement of Donald Trump. Rep. Duncan Hunter (R-Calif.) thinks pulling away from Trump this close to an election is “ludicrous.” He was one of the first GOP members of Congress to endorse Trump, back in February, and he’s still very much on board. The Fix caught up with Hunter to hear what it’s like to be on an increasingly shrinking island of Trump backers. Our conversation has been lightly edited for clarity and length.

THE FIX: A lot has changed since we last talked in February about your initial Trump endorsement. Has your support shifted in any way?

Especially to us partisan Republicans, Hillary Clinton is just about literally the worst person who could be president ever. So to pull back away from Donald Trump at this point, with 30 days left in the [campaign], I think is ludicrous. We’ve got to keep on fighting to the end. He’s our guy, our candidate, and something somebody said 11 years ago off the record, I think, is clearly wrong the media can use that against somebody.

A German gymnastic movement was started by Turnvater (“father of gymnastics”) Friedrich Ludwig Jahn in the early 19th century when Germany was occupied by Napoleon. The Turnvereine (“gymnastic unions”) were not only athletic, but also political, reflecting their origin in similar “nationalistic gymnastic” organizations in Europe. TheTurner movement in Germany was generally liberal in nature, and many Turners took part in the Revolution of 1848.[1] 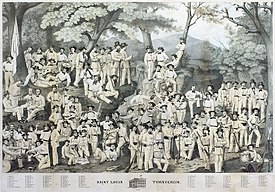