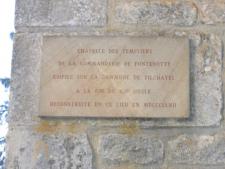 This is from my old blog.

Today I found the Templar Chapel of Fontenotte where the Rougemont
family of Knights Templar worshipped.

In this genealogy we see the Lords of Rougemont are also the Lords of
Til-Chatel, and Trichatel which is the same place.

Allow me to change the names.

“The First Preceptor of La Fontenotte

The fifth son of Guy II of Rougemont and Guillemette de Coublant,
Etienne de Rougemont was lord of Pichanges. In December 1265, having
recalled the donations made to the temple by Aimon IV and Guy II, he
gave to the Templars, with the agreement of his elder brother, Jean,
Lord of Rougemont, the right of pasturage on his lands of Pichanges
and Spoy. He died in 1271 and was buried before the altar in the
chapel of Fontenotte and conferring his Templar rank of Preceptor
(priest-templar).

After the death of Etienne, Jean de Til-Chatel had to confirm in 1274
the rights of the Templars over Fontenotte. In 1278 his younger
brother, Guy, who had been curate of Til-Chatel in 1242 then
archdeacon of Le Tonnerois in the church of Langres, succeeded him at
the head of the lordship of Pichanges.

In May, 1274, Jean de Rougemont, Marshal of Burgundy legally
recorded “for the repose of his soul and that of his elder brother,
Etienne de Rougemont, who lies in the cemetery of the said Temple,
and of the souls of his forebears”, granted to Henri de Dole,
Commander of the House of Fontenotte:”

I have found a Hughes/Hue de Rougemont who a “grand maître du
Temple”in two accounts, and the maître du Temple of Burgundy in
another.This Hugues appears to be related to Humbert de Villersexel
who wasthe Lord of Rougemont and Til-Chatel. Is this the Hughes that
preceeded Bernard de Tramelay/Dramelay? Did this Hugues come after
Bernard. In the Fromond/Dramelay genealogy we find a line of De La
Roches, and thus the Rougemonts are kin to another Templar Grand
Master, Amaury de La Roche.

“Bernard de Tramelay (died August 16, 1153) was the fourth Grand
Master of the Knights Templar. He was born in the castle of Tramelay
near Saint-Claude in the Jura. According to Du Cange, he succeeded a
certain Hugues as Master of the Temple, although this Hugues is
otherwise unknown. He was elected Grand Master in June of 1151, after
the abdication of Everard des Barres, who had returned to France
following the Second Crusade.et”

Humbert de Rougemont owned the Shroud of Turin. Humbert is a Hue name
and is kin to at least two Templar Grandmasters. Humbert was also the
Lord of Villersexel. He married the great granddaughter Geoffrey de
Charnay a Templar Grand Master. This is to say this Knights Templar
family, and thus the Knights Templars, owned and protected the Shroud
of Turin that they may have seized at Ascalon along with a great
treasure which would account for the large number of castle owned by
this very large Templar family. Never has such a constellation of
Knights Templars gathered in one place, under one roof as they did
come Sunday in Fontenotte.
Amaury and Othon de La Roche brought Jacque de Molay into the Templar
Order, the last Grand Master. Amaury disappears from history, it
alleged he was in keeping of the Templar Treasure. Did he go to
Holland where the Roesmont live, they members of the Swan Brethren
and Masters of Janskirk church?

“The legend says that it manages to escape and disparaitre
definitively at the same time as the Treasury and the secrecies of
Templiers.”

My search for my ancestor, Sergeant Rougemont, has led me to a
Templar family that was invisible. Sergeant was a Templar rank, a
title for a mayor of the Sungau, and a Seneschal. I have no direct
evident Sergeant Rougemont was kin to these Lords of Rougemont – as
yet!

“I have three separate pages for Rosamond families we believe are
descended from a Sergeant Rosamond, a Huguenot who left France in
1685 at the Revocation of the Edict of Nantes, and fought in the
Battle of the Boyne in Ireland in 1689. We have not yet been able to
definitively tie these three families together, but each family was
independently aware of the story of Sergeant Rosamond and claimed him
as an ancestor. We are hoping that as research continues we will find
records showing us the relationship between our families.”

“1208 – Pons de la Roche presents to Amadeus de Tramelay, Archbishop
of Besançon, the Shroud that his son Othon de la Roche, Latin Duke of
Athens, had sent him from Constantinople.”Aymon 2 de Rougemont was
the Seigneur of Villersexel. He married Guillemette de Ray, the
daughter of Othon 2 de la Roche.Othon 1 de la Roche (-before 1161)
had a son named Pons de la Roche the Seigneur de Ray. He first
married Marguerite Tilchatel who may be a Rougemont who came to own
Til-Chatel. Guillaume, Gui, Humbert4, Gui 2, and Thibaut 6 were
Seigneurs of Til-Chatel. Othon then married Pontia de Rougemont/de
Dramelay the daughter of Thiebaud 2 de Rougemont. They has three
children. Humbert, Thiebaud, and Sibylle de la Roche. This union
makes the Shroud the Rougemont family icon, or relic.Jon
PrescoCopyright 2006

“In 1260, Jean de Chalon gives his son ainé Hughes his strongholdsand
castles.””in liaison with Jean de Chalon, count de Bourgogne, Amé,
lord deColigny and of Andelot and Hugues de Rougemont, large main of
theTemple, by its seal the authenticity gave to a famous donation.
Itwas with that which Manassès de Coligny, brother of Amé, did with
theorder of the Temple, while being made there receive knight of
thesuzerainty of Montagna, BroissiaSeries B of the AD Besancon – 467
B – Montagna-the-Templar.Manasses Coligny recognizes, in the presence
of Jean Chalon, AméColigny, Point, prior of Gigny, and Hue de
Rougemont, master of theTemple in Burgundy, having resumed on the
order of the Temple landsMontagna , St. Fontaine and dependencies. An
1227(This charter offers the oldest text of the novel archives Doubs).
Concerned with the bishop of LangLMBO, they drew their origin from
Audon I of Til-Châtel, wire of Garnier count de Troyes attested into
918 by its signature in an act of the duke of Burgundy Richard. This
family, which carried like armorial bearings a key out of stake, also
paid homage to the dukes of Burgundy and held a row raised among the
lords of the duchy and county of Burgundy. Its members followed one
another of wire father until the year 1299 dates to which Isabelle of
Rochefort, girl of Left-handed person of Rochefort lord of Puiset in
Beauce, widow of Guy III of Til-Châtel Gonfalonier of the County of
Burgundy, became injury of Til-Châtel. It remaria with Humbert de
Rougemont about 1306 and Maria her Jeanne daughter whom it had had
with Guy III of Til-Châtel with Thiébaud de Rougemont wire of a first
marriage of her new husband. The seigniory passes then in this family
until the end of the 15° century time to which the last of Rougemont,
not having children yielded the seigniory to Antoine de Baissey
resulting from a family of Montsaugeonnais which immediately paid
homage to the bishop of Langres.”