The Bohemian Club of Crockett

I am a Journalist. I own my own newspaper that is registered in Lane County. The Bohemian Club of San Francisco was founded by Journalists who soon admitted Artists. I am also an Artist and Poet. I am not famous. To be famous, or, become famous, defeats the idea of being a Bohemian – a True Bohemian! For this reason, on this day, May 24, 2016, I found the Bohemian Club of Crockett California, the BCCC. Soon I will make available Certificates of Bohemian Authenticity, and present them to those who pass the test. This will include a portrait and brief biography.

It is my intent to move to Crockett and set up Royal Rosamond Press in a Gallery and History Room. In 1980, Mary Ann Tharaldsen, the sister-in-law of Christine Rosamond Benton,  and I, looked at the old Crockett Bakery as the potential site for an Art Gallery with studio space for artists. I predicted this city would become the new Bohemian Colony. Hence, it has become an Art Colony. I will be the Curator of this Gallery-Museum, and Caretaker of my creative family history, as well as the history of Crockett. I will stroll about my Art Colony as Captain Gregory. Gregory is my full middle name. I will get the latest scoop.  I will be the premiere Crockett character. I will make a Virtual Crockett and promote this town and my newspaper. My biography is now on hold. Our Bohemian Tales are too big to be confined to a book.

Here is a photograph of the house my father’s father, Hugo Victor Presco, was living in when my father, Victor William Presco, was born. For awhile, my grandfather lived in San Francisco and was a business partner of his brother, Oscar. They remodeled houses and built cabinets. Hugo is listed as a house painter on Vic’s birth certificate. Rosemary told me, after the brothers went their own way, Hugo ended up living in a tar paper shack under the Carquiniz Bridge  in Crockett, where Hugo made a living gambling. I had a talk with the old curator of the Crockett Museum who knew my grandfather. He told me he was one hell of a nice guy. Rosemary said 5,000 people came to his funeral, including the Mayor of San Francisco. The curator told me there were scores of gambling joints and whore houses. This is the City of the Golden Setting Sun. Hugo also gambled in the Barbary Coast in San Francisco.

When Vic was delivering produce to Crockett one day, he took his two sons down to the wharf to meet his father who lived in a houseboat. When Hugo answered the door, in a gruff voice my father introduced his sons to the man who had abandoned him, and walked away, we never to see this man again.

Rosemary told me Vic took the money Hugo’s friends had given him to buy a headstone and got drunk. What he did with the body, is a mystery. I would not put it past my father to have weighted his father down with rusty chains and dumped him in the bay. Captain Vic never paid a Vet bill if he could help it.

Victor’s father, Wensel Anton Prescowitz, came from Bohemia Germany. My father’s lineage is true Bohemian that took root in the city by the bay that would become world famous for its Bohemian flavor. The name Victor Hugo suggests Wensel was an intellectual. His history blends with that of Jessie Benton, Bret Harte, Jack London, George Sterling, and Joaquin Miller who established Oakland, Carmel, San Francisco, as Bohemian Meccas. Add Crockett to this list.

The Bohemian Club was originally formed in April 1872 by and for journalists who wished to promote a fraternal connection among men who enjoyed the arts. Michael Henry de Young, proprietor of the San Francisco Chronicle, provided this description of its formation in a 1915 interview:

The Bohemian Club was organized in the Chronicle office by Tommy Newcombe, Sutherland, Dan O’Connell, Harry Dam and others who were members of the staff. The boys wanted a place where they could get together after work, and they took a room on Sacramento street below Kearny. That was the start of the Bohemian Club, and it was not an unmixed blessing for the Chronicle because the boys would go there sometimes when they should have reported at the office. Very often when Dan O’Connell sat down to a good dinner there he would forget that he had a pocketful of notes for an important story.[6]

Journalists were to be regular members; artists and musicians were to be honorary members.[7] The group quickly relaxed its rules for membership to permit some people to join who had little artistic talent, but enjoyed the arts and had greater financial resources. Eventually, the original “bohemian” members were in the minority and the wealthy and powerful controlled the club.[8][9] Club members who were established and successful, respectable family men, defined for themselves their own form of bohemianism which included men who were bons vivants, sometime outdoorsmen, and appreciators of the arts.[5] Club member and poet George Sterlingresponded to this redefinition:

Small and seemingly timeless, Crockett has a thriving artist community, is rich in early California history, and is surrounded by thousands of acres of scenic parkland. Yet, it has managed to remain a secret in the bustling Bay Area.

According to Rita Szeto, who recently moved to Crockett, the town’s 3,100 residents move at their own pace, and nobody is in such a hurry they can’t stop and chat for a little while.

“Even the pumps at the local gas station are the slowest ever,” she said. “One day, I asked the attendant why, and she just shrugged and said, ‘This is Crockett.’ “

Over the years, the presence of artists has resulted in a number of galleries, photography studios and woodworking shops concentrated on Pomona Street, the town’s main drag.

A good place to begin a gallery-and-shop tour is the three-story Epperson Building, a former car dealership that now houses the Epperson Gallery, a gift shop and showcase for regional painters, sculptors and potters. The Nash Gallery specializes in custom framing and the Peel Edgerton Gallery features fine sliver jewelry and American Indian art.

Farther down the street is the 1314 = 9 photography studio that specializes is photos of Crockett, and next door is solYluna, a gift shop that features authentic folk art from Mexico and South America.

The Valona Market and Deli, besides serving a good breakfast and excellent sandwiches, acts as an unofficial community center and performance space. Every Sunday evening, the deli transforms into a jazz club and patrons nosh on sandwiches and sip wine while listening to local musicians.

Sterling became a significant figure in Bohemian literary circles in northern California in the first quarter of the 20th century, and in the development of the artists’ colony in Carmel. He was mentored by a much older Ambrose Bierce, and became close friends with Jack London and Clark Ashton Smith, and later mentor to Robinson Jeffers. He is depicted twice in Jack London’s novels: as Russ Brissenden in the autobiographical Martin Eden (1909) and as Mark Hall in The Valley of the Moon(1913). His association with Charles Rollo Peters may have led to his move to Carmel. The hamlet had been discovered by Charles Warren Stoddard and others, but Sterling made it world famous. His aunt Missus Havens purchased a home for him in Carmel Pines where he lived for six years. 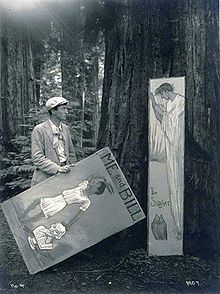 Sterling, posing with caricatures of himself at the Bohemian Grove, 1907 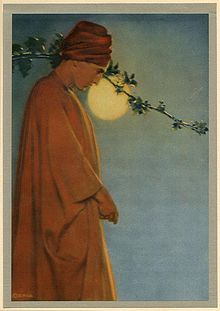 George Sterling posed for an illustration by Adelaide Hanscom Leeson which appeared in a printing of the Rubaiyat of Omar Khayyam.

John C. Frémont’s official report on the 1842 expedition he led to the Rocky Mountains reads like a great adventure story. Frémont’s father-in-law, Thomas Hart Benton, a powerful senator from Missouri and strong proponent of western expansion, was a major supporter of the expedition, whose purpose was to survey and map the Oregon Trail to the Rocky Mountains. The senator hoped it would encourage Americans to emigrate and develop commerce along the western trails.

The party that included some twenty Creole and Canadian voyageurs and the legendary Kit Carson, started out just west of the Missouri border, crossed the present-day states of Kansas, Nebraska, and Wyoming, and ascended what the men believed to be the highest peak in the Wind River region of the Rockies. Frémont’s report provided practical information about the geology, botany, and climate of the West that guided future emigrants along the Oregon Trail; it shattered the misconception of the West as the Great American Desert.

Upon his return home to Washington, DC, Frémont dictated much of the report to his wife, Jessie Benton Frémont, a gifted writer. “The horseback life, the sleep in the open air,” she later recalled, “had unfitted Mr. Frémont for the indoor work of writing,” and so she helped him. Distilled from Frémont’s notes and filtered through the artistic sensibilities of his wife, the report is a practical guide, infused with the romance of the western trail.

The Seacoast of Bohemia, Carmel, California

In 1869, he became good friends with travel writer Theresa Yelverton.[5]

In 1873 he started on a long tour as special correspondent of the San Francisco Chronicle. His roving commission carried no restrictions of any kind. For five years he traveled through Europe and went as far east as Palestine and Egypt. He sent considerable material to his newspaper, much of which it never printed, though some of it was among his best work.

Around 1880, Stoddard served co-editor of the Overland Monthly with Bret Harte and Ina Coolbrith.

Stoddard was homosexual.[9] He praised the South Sea folks’ receptiveness to homosexual liaisons and lived in relationships with men.

From San Francisco, late in 1866, Stoddard sent his newly published Poems to Herman Melville, along with news that in Hawaii he had found no traces of Melville. Having written even more fervently to Walt Whitman, Stoddard had been excited by Typee, finding the Kory-Kory character so stimulating that he wrote a story celebrating the sort of male friendships to which Melville had more than once alluded. From the poems Stoddard sent, Melville may have sensed no homosexual undercurrent, and the extant draft of his reply in January 1867 is noncommittal.

1 Response to The Bohemian Club of Crockett