How did Rosamond and Wood Drown?

“‘She would never go near that dinghy’: Sister says Natalie Wood’s fear of water makes Wagner and crewmates’ tale of how she drowned IMPOSSIBLE!”

How did Christine Rosamond and Natalie Wood, drown? Natalie Wood was the world’s most famous actress, and Rosamond, the most famous woman artist. Did Natalie have a premonition about her pending death due to drowning? Christine did, which makes it very hard to believe she ended up in the water at the most dangerous part of the Pacific Coast. Our kindred, Elizabeth Rosamond Taylor, attended Wood’s funeral. Natalie and Christine were peers,  members of a new generation of stars.

According to Wagner, their reunion also provided them with “renewed appreciation of how much we loved the ocean. We bought a 60ft boat which we called the Splendor, after one of Natalie’s films.”

Wood, however, had a well-documented fear of water. So strong was her fear that the actress would not even go in her own swimming pool.

In an interview with TMZ, Wood’s sister Lana said their mother had warned Natalie that she would die in dark water.

Davern said he believes Wagner intentionally kept the investigation into Wood’s death low profile, and didn’t do everything he could have done. When Gregory pressed Davern for supporting details, the captain said that was the duty of investigators.

Wood’s sister, Lana, also said she believed that Wagner’s story did not add up and that he had withheld information from authorities after the drowning.

Lana Wood told TMZ that Davern had once told her in a drunken phone call that Wagner told him to leave Natalie in the water the night of her death.

Davern told Wood that Wagner said at the time, “’leave her there, teach her lesson.”
Read more: http://www.dailymail.co.uk/news/article-2063056/Natalie-Wood-death-Sister-Lana-says-Robert-Wagners-tale-drowned-IMPOSSIBLE.html#ixzz46zOAmJtP
Follow us: @MailOnline on Twitter | DailyMail on Facebook

“It is nearly impossible for Vicki to believe that the jacket she has retrieved from the iceplant is the same one Christine was wearing. The world become bleary as Vicki tries to grasp the fact that the ocean must have reached this far up on the slope. Unnoticed, Vicki’s hands snap and unsnap the fastenings at the waist.” page 5

“Of course adventures rarely go as planned. The properties main
gate is unexpectadly locked, so Christine goes in search of help.
She finds it in the neighbor, a attorney Donald Layne. Of imposing
size and intelligence, Layne is also blessed with a generous nature.
None of this is lost on 46-year-old Christine. At just over five-
foot-five, she is a perennial fashion plate model and man-pleaser. Even
for this casual outing, she is wearing tailored tan slacks and a
white tunic-style blouse topped by a short jacket in soft, muted-
brown leather – distinctively sytyled with two snaps at the waist.
The sleeves were turned up, revealing the satin lining and a hint of
a forearm. A remote transmitter is finally located for the security
gate. Christine tells Layne that she and others are excited about
exploring a small cove to search for any treasures left by the sea.
Layne knows the shoreline well. That evening, he sounds a WARNING
note. “IF you go down to the ocean,” he tells Christine, “have a
care”.

Christine did not go to Rocky Point to explore a cove she did not know was there. She was going to have a small party to celebrate her first sober birthday. My sister is not “excited” about facing her nightmare.

I just discovered that Khara Bromily, who gave Christine a Tarot Card reading,
co-authored two movie scripts ‘The Rowdy Girls’ and ‘The Chosen One: Legend of
the Raven’ starring Julie Strain who looks like Rena on steroids. Strain has
been titled “Queen of the B-movies” and “Queen of All Media “. One can say that
Julie Strain is the inner Rosamond. I hereby crown Christine Rosamond ‘Queen of
B Artists’. We lived in Concord where Strain was born.

Here is Khara Bromily telling Tom Snyder the Death card came up in Rosamond’s
Tarot card reading a week before she drowned.

“Was there any indication to Khara in her vision, or the cards themselves, of
death or impending doom? Did Christine have any concerns in that regard?”

“My work is about health and forgiveness and self-worth. A death pronouncement
can work against all that. But, if you are asking if a Death card came up, then
the answer is yes?”

“Hugh Bromily, Khara’s husband and Episcopal priest, conducted the service with
taste and dignity. Raphael spoke, along with Karin: two friends from childhood.
The rest was, given those involved, what one might expect. Vic was cornering
whatever woman he could; Rosemary came in drunk, lost in her story that she was
the only seventeen-year-old to turn down Errol Flynn’s advance.”Oh it was just
awful.” Lillian recalls. ‘Rosemary was shouting that Shannon was late, ‘and
ought to have her butt kicked.’ I don’t know all what she said after that but
she had her silver flask with her and it was getting rough.”

“Before the service, Vicki had taken the trouble to go through Christine’s
bedroom, putting her jewelry and intimate belongings out of sight. As matters
turned out, it did little good, for the funeral was not long over before family
members and others were ravaging Christine’s house, taking whatever could be
carted away. The artist’scloset, a veritable mother lode – took the worst
beating. World-class spender that Christine had been, much of the clothing had
never been worn. So whatever still bore price tags was hauled off to be
exchanged for money. Jewelry disappeared, as well as other personal belongings.
Gallery employees and close friends of the family, along with Vicki, were doing
their best to staunch the flow – the estate had not yet been inventoried – but
to no avail.”

During the making of her final film Brainstorm, Wood drowned while on a weekend boat trip to Santa Catalina Island, California. She was with her husband Robert Wagner, Brainstorm co-star Christopher Walken, and the boat’s captain, Dennis Davern, at the time. Many facts surrounding her drowning are unknown because no one admitted seeing how she entered the water. Wood’s body was discovered by authorities at 8:00 AM on November 29, 1981, one mile away from the boat, with a small inflatable dinghy found beached nearby. According to Wagner, when he went to bed, Wood was not there.[44] The autopsy report revealed that Wood had bruises on her body and arms as well as an abrasion on her left cheek.[45] 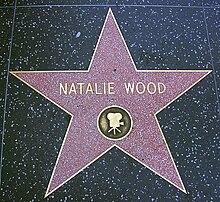 Later, in his book Pieces of My Heart, Wagner acknowledged that he had a fight with Wood before she disappeared.[45] The autopsy also found that Wood’s blood alcohol level was 0.14%, and there were traces of two types of medication in her bloodstream: a motion-sickness pill and a painkiller, which increase the effects of alcohol.[46] Following his investigation, Los Angeles County coroner Thomas Noguchi ruled her death an accident by drowning and hypothermia.[47] According to the coroner, Wood had been drinking and may have slipped while trying to re-board the dinghy.[45]

Wood was buried in Westwood Village Memorial Park Cemetery.[48] Scores of representatives of international media, photographers, and members of the public tried to attend Wood’s funeral; however, all were required to remain outside the cemetery walls. Among the celebrity attendees were Frank Sinatra, Elizabeth Taylor, Fred Astaire, Rock Hudson, David Niven,Gregory Peck, Gene Kelly, Elia Kazan and Laurence Olivier.[49] Olivier flew from London to Los Angeles to attend the service.[50] 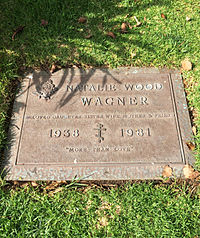 The case was reopened in November 2011 after the captain of the boat, Dennis Davern, publicly stated that he had lied to police during the initial investigation and that Wood and Wagner had a fight that evening, and alleged that Wagner was responsible for her death.[45][51][52]

After nine months of further investigation, Los Angeles County Chief Medical Examiner, Dr. Lakshmanan Sathyavagiswaran, amended Wood’s death certificate and changed the cause of her death from accidental drowning to “drowning and other undetermined factors.”[53] The amended document includes a statement that the circumstances of how Wood ended up in the water are “not clearly established”. The coroner’s office has been instructed by detectives not to discuss or comment on the case.[53]

On January 14, 2013, the Los Angeles County coroner’s office offered a 10-page addendum to Wood’s autopsy report stating that some of the bruises on her body may have been sustained before she went into the water and drowned, but that could not be definitively determined.[54] Forensic pathologist Dr. Michael Hunter has speculated that Wood was particularly susceptible to bruising due to synthroid she was taking.[55]

Douglas Trumbull, director of Brainstorm, quit directing after Wood’s death in 1981. In 2013, he explained that the uncertain circumstances of her death were the main reason for this decision. He has since decided to return to filmmaking.[56]

Wagner has denied any involvement with Wood’s death.[57]

1 Response to How did Rosamond and Wood Drown?