Picture taken 29 May 2007 shows Sir Philip Green’s private jet put at Gerry and Kate McCann’s disposal after hearing about Madeleine’s abduction, at Faro airport in Portugal. Mccann couple will fly for Rome today to prepare a meeting with Pope Benedict XVI on 30 May. Madeleine, four-year old, was abducted 03 May 2007 as she was sleeping with her brother and sister in a hotel apartment at the Ocean Club Resort, while her parents were dining at a nearby restaurant. AFP PHOTO/Steve Parsons (Photo credit should read Steve Parsons/AFP/Getty Images)

On page 152 of ‘When You Close Your Eyes’ by Tom Snyder, he records his interview with Sande Green.

”Christine and I met while I was still with my husband.” Sande says, “who had a mural painted by Garth Benton, together with some Rosamond originals. But one of our favorite
places to go – my husband had a private jet that could take us anywhere in the world – was the Monterey Peninsula. We’d fly in whenever we wanted, a limousine would pick us up, and we’d hang out for a few days.

On a trip to Pebble Beach in 1991, my husband mentioned some friends with a new gallery in Carmel, and it would be nice to visit with them. When the four of us met in the lobby, I was struck by two things about Christine: she smiled easily, and she was very quiet. That didn’t surprise me, because my husband’s wealth could be very intimidating.”

“One’s a retail mogul, the other’s a golfing legend – Phiip Green and Tiger Woods both own the impressive Gulfstream G-550. When they’re not founding shops and putting shots, respectively, they both enjoy ferrying up-to-18 people around. If they like, they can fly non-stop for more than 12 hours. The estimated cost is $53.5 million.

Kate Moss is to return to Topshop this spring, with a new 40-piece collection based on her own personal wardrobe. She parted ways with the high street giant in 2010, after 3 successful years designing for the retailer.

The supermodel and Topshop billionaire owner Sir Philip Green (pictured) apparently came up with the idea whilst on holiday together this summer. The collection us due to launch worldwide in April.

Philip Green was born on 15 March 1952 in Croydon, in South London,[3] the son of a successful Jewish property developer and retailer.[4] He has a sister, Elizabeth, five years his senior. His family moved to Hampstead Garden Suburb, a middle-class enclave in north London, and at the age of nine he was sent to the now-closed Jewish boarding school Carmel College in Oxfordshire.

When his father died of a heart attack, Green was in line to inherit the family business at the age of twelve. After leaving boarding school at 15, he worked for a shoe importer before travelling to the US, Europe and the Far East. It was on his return that he set up his first business with a £20,000 loan, importing jeans from the Far East to sell on to retailers in London.

In 1979, Green bought up the entire stock of ten designer label clothes sellers who had gone into receivership for extremely low prices. He then had the newly bought clothes sent to the dry cleaners, got them put on hangers, wrapped them in polythene to make them look new, and then bought a place to sell them to the public.[5]

In 1988, he became Chairman and Chief Executive of a quoted company called Amber Day, a discount retailer. The shares performed well, but then suffered a series of profit downgrades and in 1992 he resigned when the company failed to meet its profit forecast.[6]

Next, Green assisted Tina Green in the purchase of the Arcadia Group, which owns well-known High Street chains such as Burton, Dorothy Perkins, Evans, Miss Selfridge, Outfit, Topshop/Topman and Wallis in 2002. The company was briefly owned by Green but sold to Tina Green[7] within 24 hours, with Philip acting as CEO.

When The Guardian newspaper investigated a proposed takeover of Safeway in 2003, Green responded to queries about Arcadia’s accounts by insulting and swearing at the journalists.[8]

Charitable works and other activities[edit]

In April 1980, Green registered a philanthropic initiative, the Kahn Charitable Trust, with a vision of “putting lost smiles back on the faces of less privileged persons across the globe.”[9]

Green is a supporter of the Fashion Retail Academy[10] and the industry charity Retail Trust.[11] Green was knighted on 17 June 2006.

In May 2007, after the disappearance of Madeleine McCann in Portugal, Green donated £250,000 as a monetary reward for any useful public information.[12] He also gave the McCanns the use of his private jet to allow them to fly to Rome for a Papal visit.[13]

In 2010, Green donated $465,000 for new beds at the Royal Marsden cancer hospital, after his wife Tina’s mother died there. He also spent more than $150,000 for an Alexander McQueen dress at Naomi Campbell’s Fashion for Relief charity event.[14]

In the same year, Green donated £100,000 to the Evening Standard’s Dispossessed Fund which aims to support London’s poorest people.[15]

He was reportedly the BBC’s first choice to front the UK franchise of The Apprentice; however, at that time in 2004, he was too busy with Arcadia’s attempted takeover of Marks and Spencer.[16]

Green is based during the week at a London hotel, spending the weekends with his South African wife and owner of Arcadia Tina Green and their children Chloe and Brandon in an apartment in Monaco.[17]

Green has been described as “flash”. For his son’s bar mitzvah in 2005, he spent £4 million on a three-day event for over 200 friends and family in the French Riviera. He also hired Andrea Bocelli and Destiny’s Child to perform. For his nephew, Matt, he threw a Bar Mitzvah at Madame Tussauds, where Simon Cowell and Louis Walsh were guests and One Direction performed. Matt and Chloe shared a birthday party in December 2011, at One Mayfair, where Rihanna sang, and many personal friends of the family attended. The star-studded bash was featured in The Sun and cost over £1 million.[18] For his 50th birthday he flew 200 guests in a chartered Airbus A300 to a hotel in Cyprus for a three-day toga party, where they were serenaded by Tom Jones and Rod Stewart, who was reportedly paid £750,000 for a 45-minute set. For his 55th birthday he flew 100 guests 8,500 miles in two private jets from London Stansted Airport. They arrived at the exclusive Maldives resort of Four Seasons: Landaagiraavaru, an eco-spa on a private Indian Ocean island.[19]

Among Green’s more extravagant possessions are a 208 ft/£32 million Benetti yacht Lionheart[20] and a £20 million Gulfstream G550 private jet.[17] For his birthday, his wife bought him a solid gold Monopoly set, featuring his own acquisitions.[21]

His tax avoidance dividend scheme was criticised by many publications as a return of the unacceptable face of capitalism. A number of tabloids made light of his invitations of many prominent Hollywood figures to his birthday parties – many of whom commented they had never heard of him.

His business hero is the late Sir Charles Clore, who built the Sears Plc UK retail empire from next to nothing in the 1950s and 1960s.[22]

Green is a big football fan and a Tottenham Hotspur supporter.[23] In 1987, he suggested to Irving Scholar, the Spurs Chairman, that Tony Berry be appointed to the board.[24] In 1991, he helped Terry Venables raise the last £500,000 needed to purchase shares in the club.[24]

He was also involved in the transfers of Rio Ferdinand from Leeds United and Louis Saha from Fulham to Manchester United.[24]

He is heavily involved with Everton Football Club due to his friendship with chairman Bill Kenwright, but has no intention of formally investing in the club.[25] He arranged for another friend, Planet Hollywood’s owner Robert Earl to purchase shares from former director Paul Gregg during a struggle for control of Everton in 2004.[26] He offers business advice to the club alongside Tesco CEO Terry Leahy and helps negotiate player transfer fees with agents.[27]

Two weeks prior to the 2010 general election, Green came out in support of David Cameron, George Osborne and the Conservative Party, stating that “[Cameron and Osborne] understand what needs to be done. They get it.”[28] 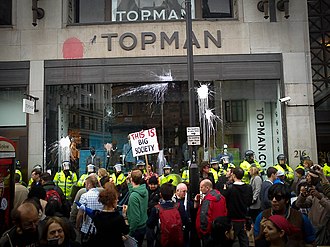 Taveta Investments, the company used to acquire Arcadia in 2002, is in the name of Green’s wife, Tina Green, a Monaco resident, resulting in a significantly lower tax liability than the £150 million that would be payable if a UK resident owned the company.[32] When Green paid his family £1.2 billion in 2005, it was paid for by a loan taken out by Arcadia, cutting Arcadia’s corporation tax as interest charges on the loan were offset against profits.[33]

Arcadia has been criticised for the pay and conditions of both overseas and UK workers by anti-sweatshop groups such as Labour Behind the Label, No Sweat and the student activist network People & Planet.[34] Green denied Sunday Times allegations in 2007 that his firm used overseas sweatshops where workers in Mauritius were paid pitiful wages.[35] In 2010, Green was again accused of using sweatshops – this time by Channel 4‘s Dispatches programme. It was asserted that he was using factories in Britain in which workers were paid less than half the legal minimum wage.[36]

In 2003, when The Guardian was conducting an investigation into Green’s corporate finances, Green responded to the publication’s queries on the subject with a string of expletive-laden outbursts about the Guardian’s financial editor, Paul Murphy. Green said: “He can’t read English. Mind you, he is a fucking Irishman.” He later apologised to the Irish, after customers threatened to boycott his stores.[37]