At the suggestion of Betty at ‘Hearts For Hospice’ I attended the second annual Springfield Chalk Festival. Because of the conversation I had with Betty at the Friday Art Walk, where I got opinions about the Simpson mural, I have renewed my vision that the city where I dwell is going to have a better art scene than Eugene. On the way to the chalk fest I still had doubts about whether there was enough Old Bohemian Funk, then I spotted a father and his daughter creating works of art together – in the street! I was blown away!

Ava looks to be around thirteen. She did a pencil drawing of a lamp post with modern signs on it. I complimented her on the balance of her piece that she had already framed, and, it was for sale. Here is the real Lisa Simpson who is getting a critique from a man who was married to an artist who was married to Thomas Pynchon.

I did not see a lot of funk in her father’s cityscape until James pointed out the purple chair on a balcony. But I raved about where Mr. Schauer set up his easel. Art is where you find it. The eagle has landed!

The Simpson mural is an escape from city reality. It takes the viewer up the Mackenzie River where Marge does a painting of Homer as a Lazy Hippie. Ho-hum! Ava’s work has the name “Pioneer” in it and a “One Way” direction sign. Is this a depiction of Thomas Hart Benton’s ‘Manifest Destiny’ that brought men and women in covered wagons as far as they could go and then they had to STOP? James sets up a surveyor’s tripod, and….we have arrived!

The Chalk Masters stake their claim, their little plot, then, explore what lie within their imaginations, the unlimited and……..Last Frontier. 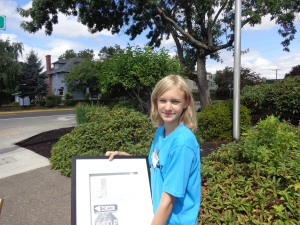 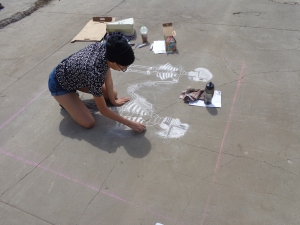 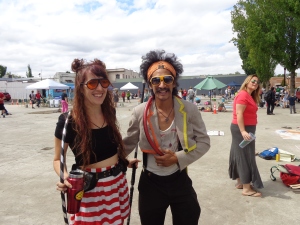 1 Response to Street and Chalk Artists