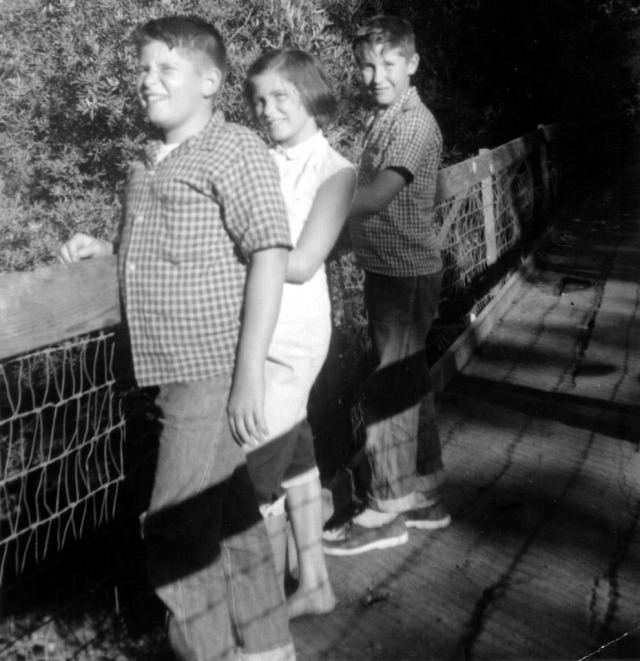 My grandmother Melba Wilkens lived next door to members of the Doyle family in Roseville California. The Doyles owned a small telephone company according to my father. Bob Doyle acted as president of the Roseville Telephone Company for many years. When we came to stay at grandma’s in the summer, we played with the Doyle children, and petted the farm animals. We loved their donkey. There was a vineyard in back where I did a oil painting of a small pond. We would go to the Roseville Zoo and tease the spitting monkey. Smokey the brown bear was a town icon.

My father was born in San Francisco, and grew up in Roseville and Oakland  His step-father, Joe Wilkins, was a rail-yard engineer for Southern Pacific. He built Melba a home on Folsom Road from scratch, complete with a great grease-pit where he worked on his Studebaker. That’s Christine and Claudia in bathing suits in from of 247 Folsom Rd. Claudia may be a Doyle.

My brother Mark and I stayed in a tent. We went fishing in a little creek, and went to the Roseville Theatre when it got real hot. The Doyle’s had a big swamp-cooler on the side of their house that is no more. Estates Rd. now cuts through their farm, and there are track homes where jack rabbits ran wild amongst the grapevines.

The photo of the Prescos packed in our old Plymouth is one of my favorites. We got up before dawn to go to grandma’s house. We lived in Concord at the time. Why so early? 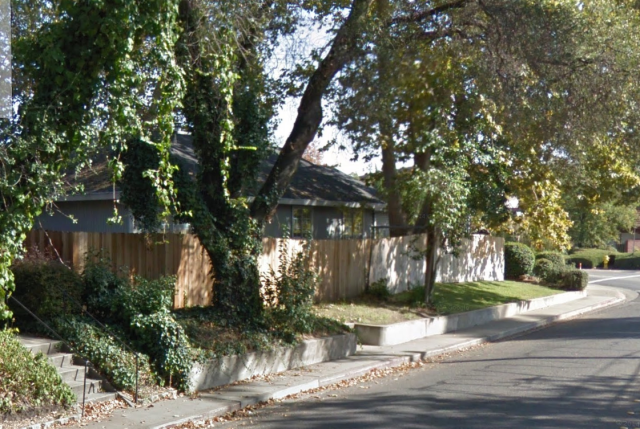 Mr. Speaker, today I wish to remember and honor one of the pioneers of the City of Roseville, in my district in California, Mr. Robert L. Doyle. After a lifetime of dedication and service, my good friend Bob Doyle passed away on August 21 at 8:47 p.m. He was 81 years old.

From the time he was born in his family’s home in 1919 until his death, Bob was a fixture in Roseville. After graduating from Roseville High School in 1937, he went to work on the family farm where he expected to remain for the rest of his life. However, in 1953, he reached a turning point in his career. His father, who along with a group of other local farmers had formed the Roseville Telephone Company 26 years earlier, asked him to take over the struggling business.

Besides his own hard work and determination, Bob Doyle’s management success was due in part to his talent for hiring good people and allowing them to do their job. He made his employees and shareholders feel like they had a personal stake in Roseville Telephone. He also made people feel that way about the Roseville community at large. In addition to his leadership at the company, Bob Doyle was involved in numerous civic and professional organizations. Among the local clubs he belonged to were the Roseville Masonic Lodge No. 222, Scottish Rite Bodies of Sacramento, Shriners, Loyal Order of the Moose Lodge, and the Elks Lodge. He also served as president of the Roseville Chamber of Commerce.

Outside of Roseville, Bob Doyle was also recognized for his leadership in the telecommunications industry. He was involved with the Independent Telephone Pioneers Association and served as president of the California Telephone Association of Sacramento.

It is also important for me to recognize that Bob’s career of service included time in the U.S. Army Medical Division during World War II.

On a personal note, I had the opportunity to work with him closely to address two of the Sacramento region’s most vital needs–improved flood control and an increased water supply. Over the years, as we worked to advocate the construction of the Auburn Dam, I developed an even greater admiration and respect for Bob. Robert Doyle was not only a community leader, but he was also a great friend.

He is survived by his wife, Carmen, three children and five grandchildren. While we join his family and friends in mourning his passing, we also celebrate his life and cherish our associations with him. He clearly left his mark on all of us. Roseville, which was once a sleepy railroad town, is now a vibrant, well-planned community with award-winning parks, law enforcement, and city management. Its railroad past blends with its newer high-tech industry and thriving retail centers. Its residential areas include dynamic new developments as well as historic neighborhoods. In short, Roseville has experienced many great changes and Robert Doyle seemed to be at the heart of them all. He will be sorely missed.

1 Response to The Roseville Telephone Company