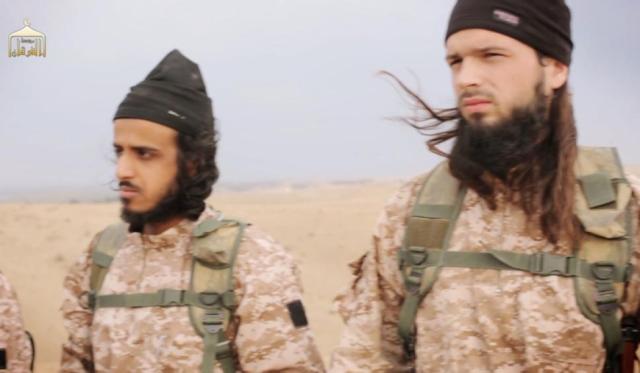 Royal Rosamond Press is going to call it: Not only is Jihadi John, dead, so is Abu Bakr, and Al-Shishani. I believe they were in the same vehicle driving to a victory celebration, when a bomb from a U.S. Navy Jet, spanked their ass – but good!

This latest video of John was taken months ago and spliced in with the multiple beheading of Syrian soldiers – and the death of the American – who is not shown alone with John. After the first beheading, the location was identified, and in the subsequent beheadings, the background was hidden. Not so in this new video that is grainy, and thus was not used months ago. ISIS is into high quality propaganda.

I saw a photo of dead Al-Shishani on a Kurdish site. The multiple beheadings is a angry and desperate attempt to even the score by subordinates that have been identified. I think we got them on the run! They are not immortals. You can see it in their faces, the glimpse of their own pending death that I told my reader I was sending their way as God’s Messenger.

Abu Bakr warns of volcanos of Jihadist spewing out the wrath of Allah.  Above is a photo of a U.S. bomb blowing Jihadist to hell in a eruption of kick ass!

Jihadi John declares: “To Obama, the dog of war. Today we are slaughtering the soldiers of Bashar and tomorrow we will slaughter your soldiers.

“With Allah’s permission, we will break this final and last crusade and the Islamic State will soon, as your puppet David Cameron said, begin to slaughter your people on your streets.”

His voice appears to have been distorted deliberately in an attempt to hide his identity.