WASHINGTON — The Russian proposal for Syria to surrender its chemical weapons has gained great momentum because it provides clear advantages to several world leaders and leaves as the losers a smaller group that lacks much power to influence the outcome. 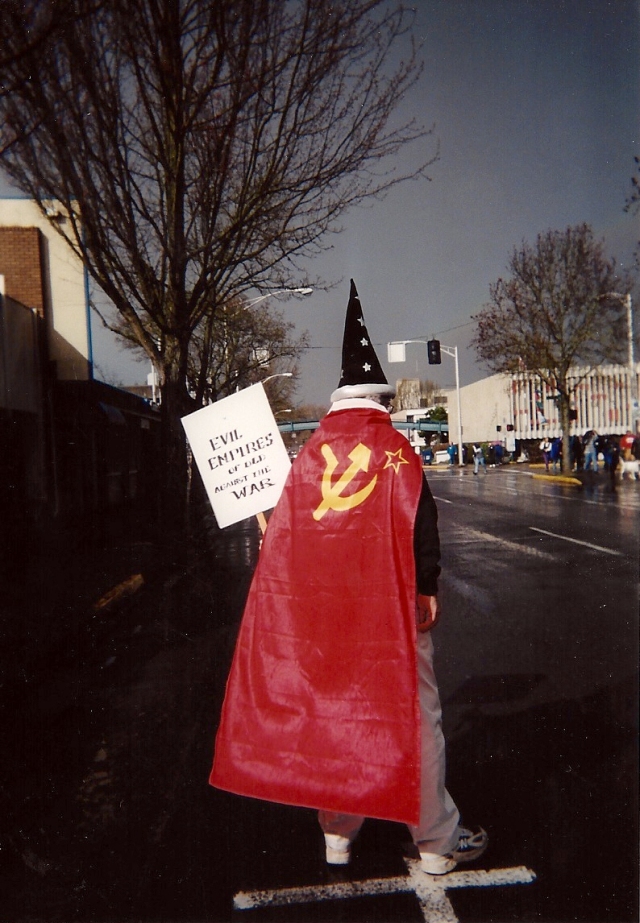 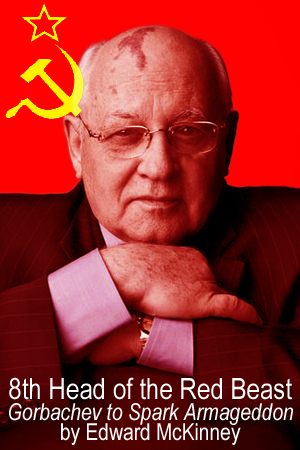 Above are photos of Virginia Hambley and I demonstrating against war Bush wants to wage against the Saddam ‘The Beast of Babylon’ in the name of Jesus. His Christian-X advisors are pulling the strings on their puppet, Joy Boy George, the Fake Cowboy.

Take note I am standing on a white cross on ground as I deliver my prophetic message;

EVIL EMPIRES OF OLD AGAINST THE WAR

My costume is aimed at the Christian-right who for two decades have gleefully been playing Armageddon with our politics, they employing nuclear weapons to TERRORIZE the American People so as to bring them to their knees and vote they way the Christian-X wants us to vote. The Christian-X are Co-terrorists. They have been sneaking around behind the curtain of righteousness trying to find a way to make OUR President look bad in regards to the use of chemical weapons on children so as to garnish Fear Votes for their Killer Jesus – who is a no-show upstaged by Putin!

STOP voting for these false prophets! Get a life!

Merlin was a candidate for the beloved Anti-Christ of the Christian-X. We marched from the University of Oregon to downtown Eugene.

“The religious leaders said they fear the political implications of the theory that is prevalent among much of the Christian right wing. If carried to its logical conclusion, arms negotiations would be pointless because nuclear war with the Soviet Union is seen as inevitable.”

This last sentence was almost a direct quote of the ALERT we had sent out.

“The church leaders who called the news conference warned, ‘A religious doctrine, the ideology of a nuclear Armageddon, has entered our nation’s political arena. The ideology of nuclear Armageddon identifies our nation’s enemies with the enemies of God. Because the religious leaders who promote this ideology believe that the destruction of these enemies is decreed in Scripture, they conclude that reconciliation with America’s adversaries is ultimately futile.”

WASHINGTON — The Russian proposal for Syria to surrender its chemical weapons has gained great momentum because it provides clear advantages to several world leaders and leaves as the losers a smaller group that lacks much power to influence the outcome.

Even if the Russian proposal bogs down at the United Nations, as many observers expect, it offers a way to put the issue back in meeting rooms rather than on the battlefield, easing anxiety in many world capitals.

A U.S. bombardment of Syria with cruise missiles, which President Obama had planned, would certainly inflict damage, including a high likelihood of civilian casualties. Despite assurances that the attacks would be “narrow and limited,” an American military strike would raise risks of escalation and retaliation.

The Syrians demonstrated their worry about the Pentagon’s ability to severely damage their military as they scrambled in the last two weeks to hide troops and equipment. The Russians, with ships in the neighborhood and probably technical advisors in Syria, didn’t want the risk of an unintended conflict with the United States.

America’s European allies, concerned about chemical attacks in Syria but facing open rebellion from antiwar constituents, were desperate for a diplomatic out.

And the Obama administration was facing the prospect of a defeat in Congress on a question of war and peace, a setback that no American president has suffered in the modern era.

“This was going to be a pretty serious attack, so the Russian proposal has come as a face-saver for a whole lot of people,” said Geoffrey Kemp, a top national security aide in the Reagan White House. “That’s why we’ve seen this extraordinary circus as everybody’s rushed over to this idea.”

For each of the major powers, the Russian plan offers some attractive elements. It almost certainly would not lead to elimination of Syria’s chemical weapons; few expect that Russia would support stripping its longtime ally of a stockpile that has been assiduously built up over decades. But a U.S. military bombardment would not have eliminated the weapons either. The Obama administration has been planning to avoid targeting chemical stockpiles, for fear of dispersing deadly clouds of gases over civilian populations.

The plan could, however, provide a potential means for deterring Syrian President Bashar Assad from using chemical weapons in the future. Deterrence was a major goal of Obama’s plan to hit Syria with cruise missiles.

Even if the Syrians don’t turn over much of their chemical arsenal, a United Nations blessing of a program to remove the weapons would focus attention on the Syrian stockpile and probably make Assad more careful about provocative new attacks. With Russia’s prestige now attached to the plan, Moscow might push Assad hard not to act in ways that could invite Western retaliation in the future, analysts said.

Russian President Vladimir Putin appears especially delighted by the tentative acceptance of the plan. It allows him to show that Moscow remains a major player in the Middle East and a world power broker.

“He’s been eager to show that he can fill the partial diplomatic vacuum the U.S. has left in the Middle East, and this lets him make that point,” said Andrew Weiss, a White House advisor on Russia during the Clinton administration and now vice president for studies at the Carnegie Endowment for International Peace.