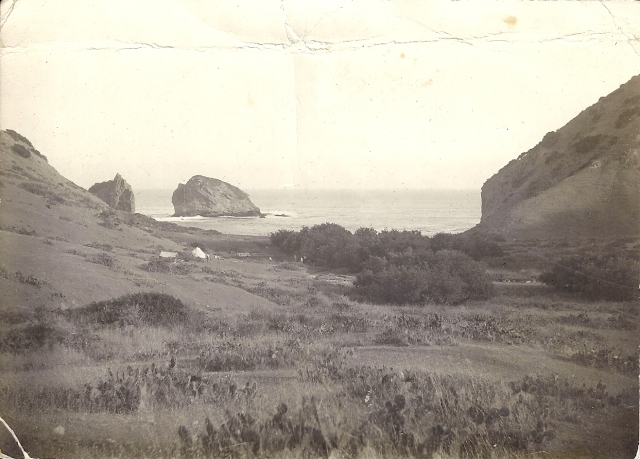 This extremely rare photo of the first west coast Black Mask get-together on January 11, 1936 captures possibly the only meeting of several of these authors.

Rosemary told me her father, Royal Rosamond, used to sail to the Channel Islands and camp with his friend, Dashiell Hammett who is seen standing on the right in the photo above.

Aunt Lillian told me she would fall asleep listening to Royal and Erle Stanley Gardner on the typewriter in the living room. Royal was Gardner’s teacher and a member of the Black Mask. I believe I can almost recoginize Black Mask authors under the tree on Santa Cruz Island sitting under a tree with my grandmother, Mary Magdalene Rosamond, who does not look very happy as she embraces a black dog. Who is that woman? Is she a writer? She looks a bit crazed, as does the guy holding a gun. Is Mary hearing some far-out and weird ideas around the campfire?

When I was fifteen Rosemary showed me about six magazines wherein her father’s stories appeared. There were several mysteries. I am going to send the camping photo to some experts. That looks like Raymond Chandler in front of the tent. Is he the guy packing heat?

Hammett wrote the Maltese Falcon that begins with a story about the Knight Templars. Was this a tale passed around the campfire on Santa Cruz Island?

Chandler had an immense stylistic influence on American popular literature, and is considered by many to be a founder, along with Dashiell Hammett, James M. Cain and other Black Mask writers, of the hard-boiled school of detective fiction. His protagonist, Philip Marlowe, along with Hammett’s Sam Spade, is considered by some to be synonymous with “private detective,” both having been played on screen by Humphrey Bogart, whom many considered to be the quintessential Marlowe.

Black Mask was a pulp magazine launched in 1920 by journalist H. L. Mencken and drama critic George Jean Nathan as one of a number of money-making publishing ventures to support the prestigious literary magazine The Smart Set, which Mencken edited, and which operated at a loss. Under their editorial hand, the magazine was not exclusively a publisher of crime fiction, offering, according to the magazine, “the best stories available of adventure, the best mystery and detective stories, the best romances, the best love stories, and the best stories of the occult.” The magazine’s first editor was Florence Osborne (credited as F. M. Osborne).[1]

Contents
[hide]
1 Editorial control
2 Contributing authors
3 Decline and revival
4 In popular culture
5 Anthologies
6 References
7 External links
Editorial control[edit]
After eight issues, Mencken and Nathan considered their initial $500 investment to have been sufficiently profitable, and they sold the magazine to its publishers, Eltinge Warner and Eugene Crow for $12,500. The magazine was then edited by George W. Sutton (1922–24), followed by Philip C. Cody.[2] In 1926, Joseph Shaw took over the editorship.

Early Black Mask contributors of note included J. S. Fletcher, Vincent Starrett, and Herman Petersen.[3] Shaw, following up on a promising lead from one of the early issues, promptly turned the magazine into an outlet for the growing school of naturalistic crime writers led by Carroll John Daly. Daly’s private detective Race Williams was a rough and ready character with a sharp tongue, and established the model for many later acerbic private eyes.

Black Mask later published the profoundly influential Dashiell Hammett, creator of Sam Spade and The Continental Op, and other hardboiled writers who came in his wake, such as Raymond Chandler, Erle Stanley Gardner, Paul Cain, Frederick Nebel, Frederick C. Davis, Raoul F. Whitfield,[3] Theodore Tinsley, W.T. Ballard, Dwight V. Babcock, and Roger Torrey.[4] Author George Harmon Coxe created “Casey, Crime Photographer”, for the magazine, which became a media franchise with novels, films, radio, comic book tie-ins, television, and legitimate theatre.[5] Black Mask’s covers were usually painted by artists Fred Craft or J. W. Schlaikjer,[6] while Shaw gave the artist Arthur Rodman Bowker a monopoly over all Black Mask interior illustrations.[7] Although primarily known for male contributors, Black Mask also published a number of women crime writers, including Marjory Stoneman Douglas, Katherine Brocklebank, Sally Dixon Wright, Florence M. Pettee, Marion O’Hearn, Kay Krausse, Frances Beck, Tiah Devitt and Dorothy Dunn. [8] The magazine was hugely successful, and many of the writers, such as Hugh B. Cave, who appeared in its pages went onto greater commercial and critical success.
Although crime fiction made up most of the magazine’s content, Black Mask also published some Western and general adventure fiction.[1]
Decline and revival[edit]
Black Mask reached a sales peak in the early 1930s, but then interest began to wane under increasing pressure from radio, the cinema, and rival pulp magazines. In 1936, refusing to cut writers’ already meager pay, Shaw resigned, and many of the high-profile authors abandoned the magazine with him. Shaw’s successor Fanny Ellsworth, (1936–40) managed to attract new writers to Black Mask, including Cornell Woolrich, Frank Gruber, Max Brand and Steve Fisher. [9] However, from the 1940s on, Black Mask was in decline, despite the efforts of new editor Kenneth S. White (1940–48). The magazine in this period carried the work of John D. MacDonald.[1] Henry Steeger then edited Black Mask anonymously until it eventually ceased publication in 1951. [2]
In 1985, the magazine was revived as The New Black Mask, and featured noted crime writers James Ellroy, Michael Collins, Sara Paretsky and Bill Pronzini, as well as Chandler and Hammett reprints. Edward D. Hoch praised the revived Black Mask, stating in the book Encyclopedia Mysteriosa that “it came close to reviving the excitement and storytelling pleasure of the great old pulp magazines”. Due to a legal dispute over the rights to Black Mask name, the magazine ceased publication in 1987. It was revived as a short-lived magazine titled A Matter of Crime.[10]
Original copies of the Black Mask are highly valued among pulp magazine collectors. Issues with Chandler and Hammett stories are especially rare and command high prices.[1]
In popular culture[edit]
Black Mask magazine was the specific pulp fiction magazine that inspired the 1994 Quentin Tarantino film Pulp Fiction. Originally, the title of the film was Black Mask, before being changed.
An issue of Black Mask magazine features as a (planted) clue in the 1927 murder mystery novel Unnatural Death by Dorothy L. Sayers.
An episode of the 1990s television series Millennium mentions a ‘literary journal’ known as the ‘Dark Mask’ which featured detective fiction, an obvious parody of the Black Mask.
Anthologies[edit]
The Hard-Boiled Omnibus: Early Stories from Black Mask edited by Joseph T. Shaw, (1946).
The Hard-Boiled Detective: Stories from Black Mask magazine, 1920-1951 edited by Herbert Ruhm, (1977).
The Black Mask Boys: masters in the hard-boiled school of detective fiction edited by William F. Nolan, (1985).
Includes a short history of the magazine.
The Black Lizard Big Book of Black Mask Stories edited by Otto Penzler, (2007).

This extremely rare photo of the first west coast Black Mask get-together on January 11, 1936 captures possibly the only meeting of several of these authors.
Pictured in the back row, from left to right, are Raymond J. Moffatt, Raymond Chandler, Herbert Stinson, Dwight Babcock, Eric Taylor and Dashiell Hammett. In the front row, again from left to right, are Arthur Barnes (?), John K. Butler, W. T. Ballard, Horace McCoy and Norbert Davis.