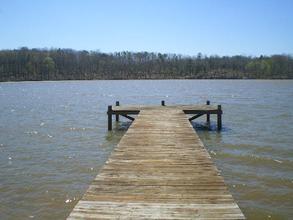 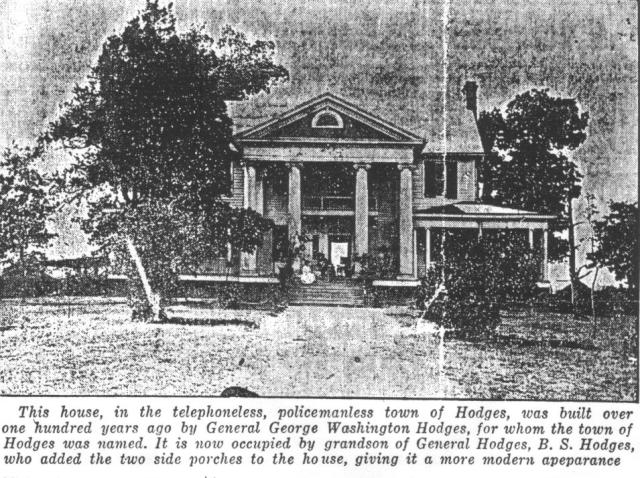 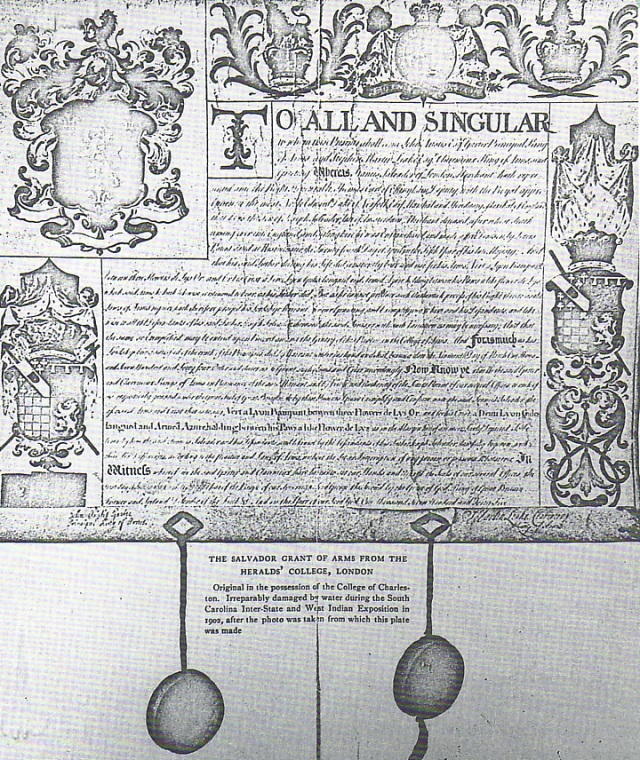 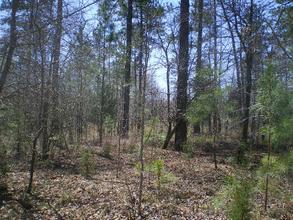 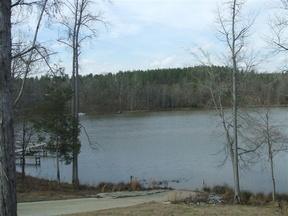 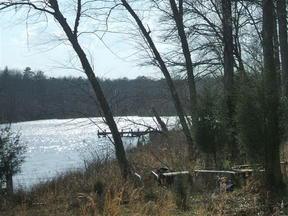 This gray, water-stained parchment, damaged during the South Carolina Inter-State and West Indian Exposition of 1901–1902, can no longer be read. The large escutcheon in the upper left is the coat of arms of the Salvador family—a lion rampant between three gold fleurs de lys.
Francis Salvador’s grandfather was a Portuguese Jew who had migrated to England from Amsterdam early in the 18th century. The family had previously secured the right to a coat of arms, perhaps in Portugal or the Netherlands. The grant issued by the College of Heralds, while not a patent of nobility, permitted the elder Salvador to call himself “gentleman.”

Francis Salvador was attacked and killed by Cherokee Indians, whom may be my kinfolk. Francis led an Exodus of Sephardic Jews from England to South Carolina, and was a leader of Reform Judaism who were anti-Zionists.
Smauel Roseman/Rosamond fought the Cherokee before he fought the British. He was a scout or Francis Marion who Mel Gibson played in the movie ‘The Patriot’. Mr. Martin owns a tomahawk that he came to own during the Cherokee wars. He had three sons that have the same name as my Rosamond kindred, Samuel, Benjamin, Nathan. Two Rosamonds took the name Francis Marion.
The Rosamond and Hodges family, intermarried. Dorothy Hodges was taken by a Cherokee chief, and had a son by him. Did this chief kill Salvador, who descends from King David?
The Hodges family owned some of the “Jews Land” owned by Salvador’s kindred. Our kindred, and their history are entwined in Biblical History and the mission of the Zionists.
Below is a photo of ‘Plantation Point’ where my acre of land promised to me by a descendant of King David, and kin of Salvador, is found. I believe the Sephardic Jews took an oath on this land that they would never return to Zion. One could say this a Thanksgiving.

“George Washington Hodges, one of the oldest and most respectable citizens of
Abbeville county, died at his late residence in the town of Hodges on Friday
night last (1876) after an illness of two days, at the advanced age of 84
years, and as his career has been an eventful one, we append some sketches
or incidents connected with his life which we doubt not will be read with much
interest:

“Gen. Hodges’ grandfather, of Culpepper, and his grandmother, of Richmond, Va.,
were married and emigrated to this country prior to the Revolution and settled
near where the town of Hodges now stands. They were the first settlers of that
vicinity, where they bought a tract of land, a portion of the English grant to
Salvador, the Jew, which had been sold to Rapley, an Englishman, and comprised
perhaps one-fourth of the land in Abbeville county, and was for a great many
years known as “The Jew’s Land.”

“During the Revolutionary war, General Hodges’ father, John Hodges, who held
the commission of major in the army of the Revolution, and the general’s
grandfather were actively engaged in the war against the tories and the redmen.
On one occasion the grandfather was at home on leave of absence, when the fact
was ascertained by the Indians, who came to this house unexpectedly, shot the
furloughed soldier dead in the presence of his family, tied the ladies, his
daughters, some four in number, preparatory to burning them and the house,
when the Indian chief, who was with the murderous gang, became enamored of the
beauty of one of the sisters, Dorothy, and proposed to her that if she would
become his wife her life should be saved.

“Her condition then might not be easily imagined. Here she was in the hands of
the murderers of her father, in the presence of his lifeless body, tied with her
sisters in the house which was soon to be enveloped with the consuming element.
Her only rescue from the impending doom was to swear that she would ever love,
cherish and obey, and keep in sickness and health a natural enemy and the murderer
of her father and sisters. The exultation of the demoniac fiends over the grief
and heartrending exclamations of these defenseless and distressed creatures was
beyond description. Finally, when this young lady, more beautiful than the rest,
was forced to a choice, she reluctantly consented to be the wife of the Indian
chief, and was loosed from the cords which bound her limbs, to be the more firmly
bound soul and body by a solemn oath to the leader of these cruel assassins.
Being removed from the dwelling she was rescued from the flames whilst the torch
was applied to the house, and her sisters perished in her presence whilst the war
dance and the song kept up the fiendish carnival.

“Dorothy was perhaps the most unhappy and the most unwilling bride upon whom
the genial sunlight of South Carolina had ever fallen.

“She was carried west with the retreating foe of the white man, as the whites
gained supremacy, and as the days, weeks and months passed she was farther
removed from the pale of civilization. In the meantime, however, her husband
loved her with a devotion not characteristic of the Indian. The chief was proud
of and rejoiced in the possession of his beautiful “pale faced wife.” His love
for her and his association with her had a wonderfully refining influence over
the red man. At the birth of their son his affection seemed warmer than before.
If Dorothy had not learned to love her husband this child was loved by the mother
as only mothers can love. Away from the presence or association of a white person,
it seemed that her whole soul concentrated in her babe, and the love of father and
mother met in the infant boy, and they held sweet communion with each other as to
their child.

“Years passed by and the Indian was as kind as one of his nature could be, and she
had almost become reconciled to her fate.

“After the war had smoothed his wrinkled front” Dorothy expressed to her husband
a desire to see her friends and relatives in Carolina, and her husband, having
unbounded confidence in her loyalty now, arrangements were soon completed for a
visit to her old home. They were then living in Alabama. The Indian chief,
accompanied by Dorothy and her child, set out on the journey. When the husband
had come to the borders of the state, as far as it was safe at that time for him
to come, pledging anew their faith and love for each other, and after making
arrangements as to when he should meet her at the same place, on her return,
they separated.

“Little did either think that this was their final separation, but it was even so.
At the time in this country there was but little facility for the conveyance of
letters anywhere, but especially was this true as regards communication between
this place and the territory occupied by the unfriendly Indian. As a consequence
no word had been heard from her since her capture years before, and her friends
had mourned for her as for the dead.

“Very unexpectedly to everybody she returned to Cokesbury, and her friends
greatly rejoiced. At the meetiing of her relatives tears of joy were shed
and the father of General Hodges gave a grand feast to which all the relatives
and neighbors were invited, and they assembled in joy to greet the long lost
friend and relative.

“Once more in the bosom of her family, she became the prey of a thousand
conflicting emotions, until at last, when the time arrived for her return,
she yielded to the intercession of her friends and cast in her lot with
them henceforth.

“In the course of years she seemed to forget her troubles, and being yet of
fine personal appearance and possessed of attractive manners, a citizen by the
name of Rosemond sought her heart and hand in marriage. In the course of time
they were married, after which they remained in this county for a number of years
and to them were born a number of children. The family moved west, taking all
the children by the second marriage, and it is believed that there is now no
descendant of this branch of the Hodges family remaining in Abbeville county.

“Before their departure the little Indian boy grew up, was sent to school,
and soon began to show the characteristics of the race. Having heard of his
father and wishing to learn more of his father and his people, he set out
before he had arrived at the age of maturity for the Indian territory from
which he never returned, and from him nothing was ever afterwards heard.

“General Hodges remembered seeing the Indian boy and heard the story, which we
have just related, from his mother’s own lips.

“General Hodges father lived within a mile and a half of the present site of
Hodges’ depot. General Hodges himself lived all his life within a mile and a
half of his birthplace. When he first went to housekeeping there was but little
cleared land in the county, and game was so plentiful that it ravaged the crops–
Mrs. Hodges once having shot a deer that was feeding in their turnip patch.

“General Hodges, by his industry and economy, managed to amass a considerable
fortune, and when he built his late dwelling 54 years ago, it was considered
the finest house above Columbia.

“He was once a member of the state legislature, and long held a commissioned
office in the militia of the Savannah regiment. In all matters of public
interest he always took an active part, and at one time he was sent as
commissioner to the Indians, with whom he was exceedingly poplar, and who
were delighted because of his smoking with them the pipe of peace. The general
could send up volumes of smoke so much larger than they could, and they were so
much delighted that great numbers of the men and women of the neighborhood
assembled on the second day after his arrival to see the white man smoke the
pipe of peace.

“The town of Hodges was named for him, on the establishment of the railroad
depot at that place. When the telegraph line was finished to that place a few
years ago the first message, a congratulatory epistle was addressed to him as
the “Patriarch.” He preserved this message, which is still in possession of
the family. He was the ‘Pater Familias’ of the town which bears his name.”
——————————————————————————–

•1773 – Joseph Salvador sold 7,000 acres to his nephew Francis Salvador. Francis wanted to grow indigo as a cash crop on the land. (from A Portion of the People: Three Hundred Years of Southern Jewish Life)

Slaves
•Number of slaves – 30 in 1773 (from A Portion of the People: Three Hundred Years of Southern Jewish Life)