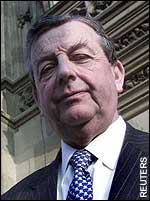 The folks who pay good money behind the scenes to see Newt and Mitt tear each other apart, worked hard to Privatize and Demonize America and Americans. Some of these demons live in a foreign land. Any American who conspired with these foreigners – is a Traitor!

Ralph Reed, ex-head of the Christian Coalition, worked with these foreigners when he was a advisor for Enron Rat who fled the sinking flag ship, the Enron Church of Trickle Down Evil.

The head of NRP compared my President to the captain who fled from the shipwreck in Italy. Here are Thatcher’s devils cheering major fire disasters! During the war with Japan, balloons were released with fire bombs onboard to start forest fires in Oregon and California.

Lord Wakeham’s contacts with Enron began when he was appointed energy secretary by Margaret Thatcher in 1989 with the task of privatising the electricity industry.

An accomplished accountant, the minister had both to deliver a complex privatisation programme and create an electricity energy market from scratch. At the time, the biggest private energy market was in the US, and Enron was seen as being at the cutting edge of exploiting it.

Four years after California’s disastrous experiment with energy deregulation, Enron energy traders can be heard – on audiotapes obtained by CBS News – gloating and praising each other as they helped bring on, and cash-in on, the Western power crisis.

“He just f—s California,” says one Enron employee. “He steals money from California to the tune of about a million.”

“Will you rephrase that?” asks a second employee.

“OK, he, um, he arbitrages the California market to the tune of a million bucks or two a day,” replies the first.

The tapes, from Enron’s West Coast trading desk, also confirm what CBS reported years ago: that in secret deals with power producers, traders deliberately drove up prices by ordering power plants shut down.

“If you took down the steamer, how long would it take to get it back up?” an Enron worker is heard saying.

“Oh, it’s not something you want to just be turning on and off every hour. Let’s put it that way,” another says.

“Well, why don’t you just go ahead and shut her down.”

Officials with the Snohomish Public Utility District near Seattle received the tapes from the Justice Department.

“This is the evidence we’ve all been waiting for. This proves they manipulated the market,” said Eric Christensen, a spokesman for the utility.

That utility, like many others, is trying to get its money back from Enron.

“They’re f——g taking all the money back from you guys?” complains an Enron employee on the tapes. “All the money you guys stole from those poor grandmothers in California?”

And the tapes appear to link top Enron officials Ken Lay and Jeffrey Skilling to schemes that fueled the crisis.

“Government Affairs has to prove how valuable it is to Ken Lay and Jeff Skilling,” says one trader.

“Do you know when you started over-scheduling load and making buckets of money on that?

Before the 2000 election, Enron employees pondered the possibilities of a Bush win.

That didn’t happen, but they were sure President Bush would fight any limits on sky-high energy prices.

“When this election comes Bush will f——g whack this s–t, man. He won’t play this price-cap b——t.”

“We will not take any action that makes California’s problems worse and that’s why I oppose price caps,” said Mr. Bush on May 29, 2001.

Both the Justice Department and Enron tried to prevent the release of these tapes. Enron’s lawyers argued they merely prove “that people at Enron sometimes talked like Barnacle Bill the Sailor.”

Master fixer who ended up in a fixCritics have wondered how former Tory minister Lord Wakeham, no stranger to controversy, found time for all his business activities

During his 20-year parliamentary career, Lord Wakeham became known as “minister for banana skins” for his sure-footed handling of potentially tricky issues.
Nicknamed “the chief”, his reputation was as a “fixer par excellence” who acted behind the scenes providing invaluable advice to the prime minister. When he was chief whip he kept tabs on backbenchers and let those at the top know exactly what was going on.

Lord Wakeham’s contacts with Enron began when he was appointed energy secretary by Margaret Thatcher in 1989 with the task of privatising the electricity industry.

An accomplished accountant, the minister had both to deliver a complex privatisation programme and create an electricity energy market from scratch. At the time, the biggest private energy market was in the US, and Enron was seen as being at the cutting edge of exploiting it.

Lord Wakeham oversaw the first contracts for Britain’s gas-fired power stations – to British Nuclear Fuels and Enron. Enron won the contract for a large power station in Teesside, which would include providing energy for the ICI complex there.

In 1994, months after Lord Wakeham quit as leader of the House of Lords and two years after leaving the energy brief, he became a non-executive director of Enron.

At the time, his £80,000-a-year job raised few eyebrows – it was part of a long tradition of retired ministers putting their departmental expertise to lucrative use in the private sector.

Keen to fill the rest of his diary, Lord Wakeham cast his net wider in his search for lucrative roles. In January 1995, his business career caused angry protests in the Commons when MPs discovered that he had become a director of the merchant bank NM Rothschild.

NM Rothschild had advised regional electricity companies while Lord Wakeham was privatising them as a member of the government. The merchant bank had already signed up Lord Lawson, former chancellor, as a non-executive director. Gordon Brown, then shadow chancellor, wrote to the parliamentary standards commissioner, Lord Nolan, complaining: “The cabinet room is becoming a recruiting ground for the boards of privatised companies.”

It later emerged that Lord Wakeham had awarded a contract to NM Rothschild to advise the government on coal privatisation.

More recently, NM Rothschild has taken the former minister into equally controversial waters. The bank advised the government on privatisation of Railtrack, and now faces lawsuits from shareholders, who claim the prospectus for flotation was misleading.

Lord Wakeham also sits on the advisory board of LEK Consulting, a management consultancy which is working with the German bank WestLB on Swiftrail, a project to buy Railtrack out of administration.

Critics have frequently asked how Lord Wakeham could devote sufficient time to all his business interests. At one point, he had a dozen different directorships.

Among his responsibilities is chairing the board of Vosper Thorneycroft, the shipbuilder. This appointment followed a familiar pattern – one of his first government jobs in the early 1980s was as a parliamentary under-secretary of state at the Department of Trade, then responsible for shipbuilding.

While Vosper has prospered over the last year, with its shares surging by more than 50%, Lord Wakeham’s other substantial quoted company, the recruitment firm Michael Page, has had a terrible time. After floating last March with a market value of £650m, the company issued two profit warnings in quick succession. Michael Page’s market value fell as low as £375m, infuriating investors.

Lord Wakeham, his wife Angela and another relative, Jonathan Wakeham, own a family company, Genner Holdings, a provider of “consultancy and management services”.

According to filings at Companies House, Genner Holdings had investments of £1.3m in 2001. As directors, the three Wakehams drew a combined salary of £218,800 and received dividends of £140,000.

· Director of the merchant bank NM Rothschild, which is among the City’s biggest financial advisers and deal-makers

· Chairman of the press complaints commission

· Chairman of recruitment company Michael Page, which specialises in filling jobs in accountancy, finance and law

· Chairman since 1995 of Vosper Thorneycroft, one of Britain’s biggest military shipbuilders

· Member of the advisory board of LEK, an international management consultancy

· Director of Kalon, a paint company owned by the French group TotalFinaElf

· Director of the Carlton Club, recently boycotted by Tory leader Iain Duncan Smith for its refusal to grant full membership to women

· Director of Cothill House, a preparatory school in Oxfordshire