James The Nazarite Brother of Jesus

Here is the hit one author has on James The Just, who appears to be a Nazarite. I will now be publishing discourses on James and the Nazarite Way.

The Death of James the Just,
Brother of Jesus Christ

This is the earliest known testimony to the death of James the Just, brother of Jesus our Lord.

See my books as well.

What a strange character James is! There is no indication that he followed Jesus at all during Jesus’ earthly lifetime. After the resurrection, however, he is one of the leading figures in the church.

I suppose this makes sense. After all, it would be hard for any of us to be convinced that our big brother is the creator of the world. On the other hand, if he rose from the dead it might spark a change in us! 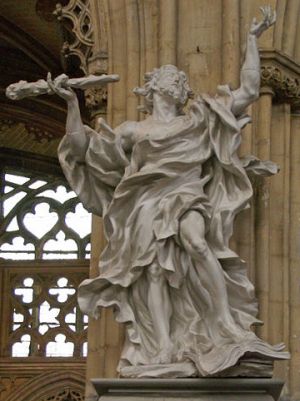 Statue of James the Just in Liege, Belgium

However, James is odd in other respects. Unlike the twelve, he never left Jerusalem. History says he was appointed as overseer there by the apostles. Acts, though, leaves us with the impression that he carried as much or more authority than the apostles who appointed him!

Not only did he not leave Jerusalem, but surely he was the most Jewish of the apostles. (James is called an apostle in Scripture—e.g., Gal. 1:19—but he was not one of the twelve.) While he acknowledged that the Gentiles did not need to keep the Law, he was always the one most on the side of the Law. Peter refused to eat with Gentiles out of fear of James (Gal. 2:11-12), and James asked Paul to buy the sacrifices for men about to take a Nazirite vow (and Paul complied – Acts 21:18-26!!!).

James remained the leader of the Jerusalem church until his death around A.D. 62. This is the account of his martyrdom according to Hegesippus (a 2nd century Christian about whom little is known), which is quoted in Eusebius’ Ecclesiastical History, vol. II, ch. 23 (A.D. 323).

I’m retelling the story in my own words, not quoting him. Eusebius gives three versions of the death of James: one from Clement of Alexandria, one from Hegesippus, and one from Josephus (yes, Josephus’ Antiquities was being quoted way back then!). This is Hegesippus’ version, which Eusebius judges the most accurate.

Historians, however, prefer Josephus’ account of the death of James, which I’ll cover in a paragraph or two at the end of the page.

Introduction: What Sort of Person James Was

James was called “the Just” because of his great righteousness. Rumor has it that he was a Nazirite from his mother’s womb. He didn’t drink any wine or liquor, and he didn’t eat meat. He never cut his hair, did not anoint himself with oil, and did not bathe.

Note: I don’t believe this rumor. Somehow I can’t picture Joseph and Mary requiring this of Jesus’ younger brother, nor can I picture a long-haired guy who never bathed as the long term bishop of Jerusalem, known to posterity as “James the Just.”

He was the only one allowed to enter the temple alone, and he prayed and asked forgiveness for the Jews so much that his knees became hard like a camel’s. As well as “the Just,” he was known as “Bulwark of the people.”

These sects are mentioned by Hegesippus, a little-known Christian of the 2nd century. Others refer to “the seven sects,” but the list is not always the same. Here are Hegesippus’ sects:

James was so righteous, in fact, that he was respected by all the seven sects of Judaism (see sidebar). They used to ask him his opinion of Jesus, to which he would reply that Jesus was the Savior. Since some of those sects didn’t believe in a resurrection, few among them believed in Jesus as their Christ.

Those who did, however, believed because of James.

James the Just Arouses the Wrath of the Rulers

After a while, James’ influence became so strong that even some of the rulers believed, which horrified the scribes and Pharisees. They became afraid that soon the people would be flocking to Jesus as the Christ.

Somehow, perhaps because of his strict observance of the Law, the Pharisees thought they could get James to discourage the people from believing. They asked him to stand at the pinnacle of the temple on Passover and speak.

They brought him to the top of the temple, and they shouted to him from below:

“Oh, righteous one, in whom we are able to place great confidence; the people are led astray after Jesus, the crucified one. So declare to us, what is this way, Jesus?”

Obviously, this wasn’t a very wise thing for them to do. James was ready to take full advantage of such a wonderful opportunity as this!

His words are memorable:

Why do you ask me about Jesus, the Son of Man? He sits in heaven at the right hand of the great Power, and he will soon come on the clouds of heaven!

The Pharisees were horrified, but the people were not. The began shouting, “Hosanna to the Son of David!”

The Pharisees, realizing the awful mistake they’d made, began crying out, “Oh! Oh! The righteous one is also in error!”

The Death of James the Just

You can probably guess that this had little effect on the crowd. So the next obvious thing to do was to push him down from the temple, letting the people know exactly what happens to those who dare to believe in Jesus.

They climbed the temple as the people shouted, reached the top, and threw James from the pinnacle of the temple.

It didn’t kill him.

He rose to his knees and began to pray for them. “I beg of you, Lord God our Father, forgive them! They do not know what they are doing.”

This would not do! The Pharisees on the ground began to stone him as he prayed, while those from the roof rushed down to join the execution.

One of the priests, however, a son of the Rechabites mentioned by Jeremiah the prophet (ch. 35), shouted, “Stop! What are you doing! The righteous one is praying for you.”

It was too late. A fuller (i.e., launderer) took out one of the clubs that he used to beat clothes and smashed James on the head, killing him with one blow.

Ramifications of the Death of James the Just

According to Hegesippus, Vespasian invaded Israel and besieged Jerusalem immediately after the Pharisees murdered James. The events were so closely related in time, he says, that “the more sensible even of the Jews were of the opinion that [the death of James] was the cause of the siege of Jerusalem.”

The problem with that idea is that the siege of Jerusalem happened in A.D. 66, and Josephus says that the death of James happened after Porcius Festus had died and before Albinus became procurator of Judea. While I don’t know the history of Roman governors well enough for that to mean anything to me, historians tell us that means James the Lord’s brother died in A.D. 62.

I may not have the Roman governors of Judea memorized, but I can do that math. That’s a four year gap.

That is probably too long for Hegesippus’ “immediately” statement to be true, but the events may still be related. Even Josephus testifies that the illegal murder of James offended the Jews so much that they met Albinus on his way to Jerusalem to get help on the matter. If the death of James stirred up Jerusalem that much, it could easily have had something to do with the First Jewish-Roman War just four years later.

Josephus’ Account of the Death of James the Just

According to Josephus, Ananus became the high priest of Jerusalem after the procurator, Porcius Festus, died. While the new procurator, Albinus, was on the way, Ananus saw the opportunity to get rid of James.

Josephus does not say why Ananus wanted the death of James other than that he “was of an exceeding bold and reckless disposition.”

Josephus makes it very simple. Ananus gathered the Sanhedrin, accused James of violating the Law along with some others and had them all stoned. As a consequence, Albinus removed Ananus from his position of high priest upon his arrival.

1 Response to James The Nazarite Brother of Jesus