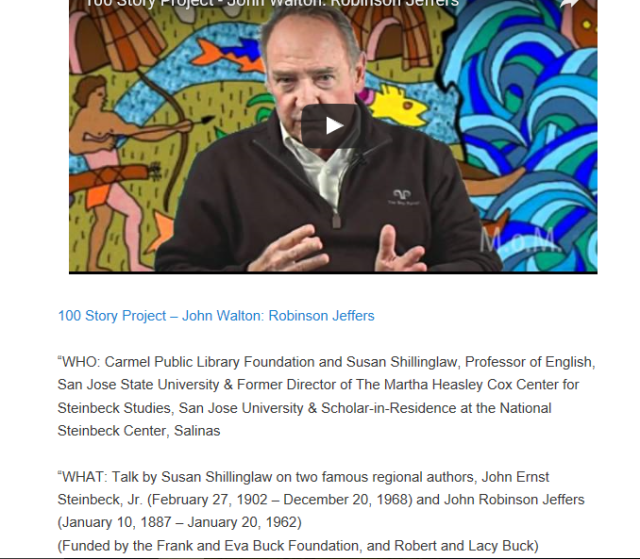 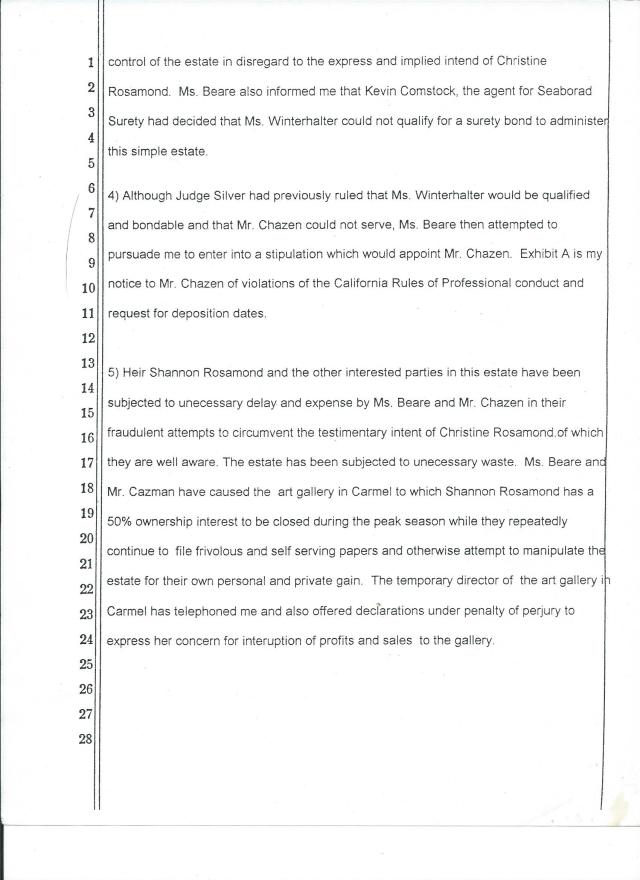 I just discovered that Robert Buck has been on the Board of the Jeffers Tor House Foundation for many years. I assume  Lacy Williams Buck is his daughter, she too on the board. What this tells me, is, Robert Buck understands historic family legacies. Why then did his law firm utterly destroy my family legacy, and its star, Christine Rosamond Benton. Before they did this, they destroyed my niece, Shannon Rosamond. I am sure Robert Buck and his partner, Sydney Morris, know Lawrence Chazen, and Robin Beare, who suggested my niece be KEPT IN JAIL, instead of being in HER GALLERY selling Rosamond prints. Morris blesses the desire of ‘The Caretakers’ to write a biography and make a movie. Robert Buck’s book ‘When You Close Your Eyes’ denigrates and demonizes my late sister. Only Charles Dickens, or Victor Hugo, could do The Real Rosamond Story – JUSTICE!

I see Shannon down in a Carmel dungeon, or, locked in a tower, while Lacy Buck prances freely about strengthening THE BUCK FAMILY HOLD on California History. Note the Steinbeck Studies that should include the fruit orchards that Frank Buck owned. I think Beryl Buck had not intention of funding the worship of a poet – and his home – outside Marin County. Just as Heisinger, Morris and Buck installed outsider, Stacey Pierrot in the Rosamond Gallery, Bob Buck has put a giant feather in his kindred’s hat, she getting to walk about the Tor home – as if she owned it. Latinos picked the pears and fruit off Buck trees. Was there stoop-labor involved?

The chances that Bob Buck DID NOT KNOW a film was in the works about a famous Carmel Artist, is very slim!  Bob’s law firm was just around the corner from the Rosamond gallery on Dolores. Did Robert Buck swing by with his rich friends to say hello to Stacey Pierrot, and show off HIS GOOD WORK? Does Bob know about me, that evil poor guy? If Chazen had become executor, would he have made a movie? Did the Buck Foundation attack me, and try to destroy me – too?

A demand by San Francisco interests for money from Marin County’s celebrated Buck Trust is rekindling a fiery dispute over a philanthropist’s fortune.

Vocal activists, joined by members of the San Francisco Board of Supervisors, have accused the Marin Community Foundation of neglecting the poor and mishandling the $1.2 billion trust — one of the nation’s largest charitable funds — that grew out of a 1975 bequest by wealthy Ross matron Beryl Buck.

Among their demands are distribution of the money throughout the region and a multimillion-dollar grant to empower Latinos.”

Proceeds from the book and movie will not be going to Christine’s daughters. I offer proof that my evil sister, Vicki Presco, did change the locks on the door of our sister’s home, and handed Shannon a key. I saw this. Here is part of a poem, from the Tor house contest. I just talked to someone at the SF Board of Supervisors! This is feathering one’s nest – with popping wine corks!

As night thickens, we slip
into lawn chairs, pour
a glass of merlot.

As night thickens, we slip
into lawn chairs, pour
a glass of merlot.

ENTER………The Evil Witch of the Sea! The Sea Hag!

About half of the Marin Community Foundation’s $1.7 billion in assets is money from the original Beryl Buck endowment; the rest is donor-advised funds. In addition to managing the Buck Trust’s assets, the foundation administers charitable funds for more than 450 people, families and businesses. These giving accounts are known as “donor-advised funds” because the donors consult with the foundation regarding how their money should be spent.

Mr. Buck’s development of Del Monte Aviation followed many years of activity in real estate development, agribusiness and oil production. He is a founding partner of the Carmel law firm of Heisinger, Buck and Morris. Mr. Buck is active in charitable endeavors, now serving as Vice Chairman of the Buck Institute in Marin County, California, a medical research facility specializing in the problems of aging.

He was the founding president of the Frank and Eva Buck Foundation, which grants college scholarships in Northern California and has been on the Board of the Jeffers Tor House Foundation in Carmel for many years.

Robert Buck owns the law firm that stepped into to be the Special Executor of Rosamond’s creative legacy after Vicki Presco refused to serve. Robert is connected to the Buck Trust and Institute that is right out of a science fiction novel in regards for searching for the Fountain of Youth.  Robert also owns Del Monte Aviation that flies in professional golfers to play at Pebble Beach. This beats anything Thomas Pynchon could dream up. ‘Inherit Vice’ should have been like ‘Chinatown’. Pynchon is in the Presco Family Tree. I married his ex-wife.

Critics argue this is an unnecessary expense, and that the money would be better spent on the needy of Marin—as Mrs. Buck wished. Dr. Peters responds to this critique in his characteristically careful and politically sensitive manner: “Do I need a special master to tell me whether or not I need to make sure that Dr. and Mrs. Buck’s money as to their will is spent appropriately?” He asks. “No, I don’t need that.” But, he adds: “Justice Strankman is a most thoughtful, intellectual partner to have. He’s a real resource to think through the issues. He and the court have been most supportive of our reach well beyond Dr. and Mrs. Buck’s family and played a key role in supporting our efforts to attract other donors…”
All told, the Buck Trust has doled out more than $1 billion. After 25 years of stewardship by the Marin Community Foundation, it is time to ask how successful it has been in meeting the Bucks’ challenge of providing help for the needy.