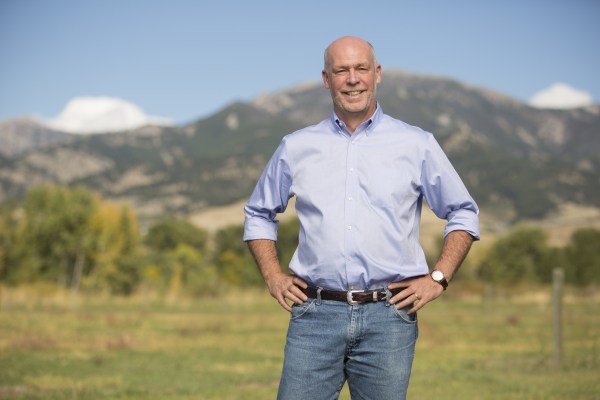 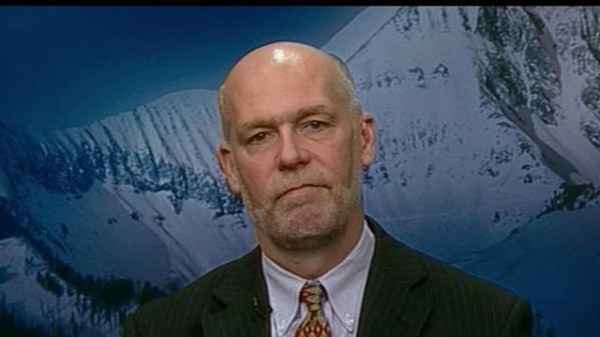 It’s being called a “showdown”. Can you believe it! I need to collect every paper and article that uses the word “showdown” and make an art piece!

To be clear, at no point did any of us who witnessed this assault see Jacobs show any form of physical aggression toward Gianforte, who left the area after giving statements to local sheriff’s deputies.

As for myself and my crew, we are cooperating with local authorities. Gianforte was given a citation for misdemeanor assault and will have to appear in court sometime before June 7.

Later, the statement added, “After asking Jacobs to lower the recorder, Jacobs declined. Greg then attempted to grab the phone that was pushed in his face. Jacobs grabbed Greg’s wrist, and spun away from Greg, pushing them both to the ground. It’s unfortunate that this aggressive behavior from a liberal journalist created this scene at our campaign volunteer BBQ.”

A key player in this major story is Brian Gootkin, the sheriff of Gallatin County, Montana who is looking into the Gianforte incident. Gootkin is a Republican, a supporter of President Donald Trump, a donor to Greg Gianforte.

So who exactly is Brian Gootkin, the sheriff of Gallatin County? Here’s what you need to know about him.

Brian Gootkin has been the sheriff of Gallatin County, Montana since 2011.

According to the Bozeman Daily Chronicle, Gootkin, who had previously served as undersheriff, was promoted to sheriff after Sheriff Jim Cashell retired. Gootkin served for a year until elections could be held for sheriff, at which point he was officially elected and could continue serving in the position. He ran as a Republican.

“The Gallatin County Sheriff’s Office’s priority will continue to be providing the highest level of Law Enforcement to help with everyone’s basic need, to feel safe in their homes and communities,” he said on his campaign website in 2012. “You should be very proud of your Sheriff’s Office. We are dedicated to protect and serve Gallatin County ALL DAY, EVERY DAY.”

At the time that he was appointed Sheriff, Gootkin touted his past accomplishments, including working as part of a SWAT team kicking down doors. He also said that he managed a jail that was constantly overcrowded and took the lead in opening a new jail.

Gootkin had previously served in the Air Force working security, but he told the Bozeman Daily Chronicle that this wasn’t quite as fulfilling as he would hope.

“With security you’re not helping people directly,” he said. “That was the biggest difference that I wanted. I wanted to help people.

2. A Montana Reporter Was Accused of Having a Conflict of Interest Because She Is Dating Gootkin

In 2015, a Montana reporter came under fire because she was in a relationship with Brian Gootkin and frequently covered stories about him.

According to Ad Week, in December 2015, it became clear that Brian Gootkin was in a relationship with Judy Slate, a reporter for KBZK. Slate had done reports on Brian Gootkin, such as one about him doing the ice bucket challenge and another about him touring a local high school. However, she did not disclose this potential conflict of interest in her reports.

Based on Judy Slate’s Facebook page, she and Brian Gootkin are still together.

Gootkin was previously married. He met his ex-wife, Cori, in Great Falls while he was serving as a security specialist with the United States Air Force, and they were married in 1992. They have two teenagers together, according to the Bozeman Daily Chronicle.

It’s unclear when exactly Gootkin and his ex-wife were divorced, but on Facebook, he lists his relationship status as “separated.” Gootkin was still with Cori when he was running for sheriff in 2012.

“Montana is all about family, friends, and relationships, (PEOPLE),” he wrote on his campaign website in 2012. “That starts with MY family. I have been married to the love of my life Corina for 20 years on June 27th! My daughter Alicia is graduating from Three Forks in May, and attending MSU this fall. My son Tyler will be a sophomore. Like every family, we have been through good and very difficult times, but we are stronger than ever. Everything with your Sheriff’s Office begins and ends with family. As your Sheriff I promise that will always be my PRIORITY!”

3. He Announced He Would Send Officers to Standing Rock & Then Reversed the Decision

In November 2016, at the height of the Standing Rock pipeline protest, Gootkin said that he would be sending officers there to provide assistance.

“I know a lot of the sheriffs over in North Dakota and I contacted them last week, they requested assistance from Montana,” Gootkin said, according to KRTV. “They’re busy and they’ve got a lot going on and it’s turning volatile.”

Gootkin subsequently posted on the Gallatin County Sheriff’s Office Facebook page, “As many of you are aware, there have been protests in North Dakota that have recently turned violent. I have worked with the North Dakota Sheriffs in the past and they have requested our assistance.”

However, after facing criticism for this, Gootkin reversed his decision after only about a day.

“Although my actions were well intentioned you made it clear that you do not want your Sheriff’s Office involved in this conflict,” Gootkin said. “One of the biggest differences of an elected Sheriff from other law enforcement leaders is that I am directly accountable to the people I serve (YOU) and although I am personally torn knowing that people (Including Montanans) are hurting over there, we will not be responding. Finally I am incredibly grateful that we live in a place where we can have differences and talk about them respectfully as adults without conflict.”

4. A Judge Ruled in 2016 That Gootkin Wrongly Fired a Sheriff’s Deputy

In 2016, a judge ruled that Sheriff Gootkin had wrongfully fired a Gallatin County sheriff’s deputy.

According to the Bozeman Daily Chronicle, David Johnston was fired by Brian Gootkin after refusing to turn over a tape recorder. On the tape recorder was audio of Johnston arguing with his girlfriend, who at the time was a deputy; the two were arguing while responding to a call.

Gootkin said that the tape recorder was the property of the county’s and therefore needed to be returned. Johnson argued that he should be allowed to retrieve the contents of the tape recorder before returning it.

A judge ruled that Gootkin had wrongfully fired Johnston, noting that Johnston did not outright refuse to turn over the tape recorder; rather, he just wanted to speak with legal counsel first.

“The termination hearing that resulted in Johnson’s termination does not pass muster in terms of basic due process rights afforded to any individual facing the potential loss of his or her livelihood,” the judge ruled.

5. He Has Donated to Greg Gianforte

Greg Gianfote, candidate for the U.S House of Representatives. (Getty)

Brian Gootkin is evidently a supporter of Greg Gianforte.

Wall Street Journal reporter Reid J. Epstein‏ was the first to point out on Twitter on Wednesday night that Gootkin donated $250 to the political campaign of Greg Gianforte in March 2017.

1 Response to “Showdown” In Bozeman