In memory of Civil rights volunteers James Earl Chaney, Andrew Goodman and Michael Schwerner, who disappeared on June 21, 1964, and whose case was officially closed today, I found the Integrated Turner Community which will follow in the footsteps of the Turner Society, the Turnverein, the Forty-Eighters, and the Radical Republicans who fought to free slaves, then went South to put blacks in office after the Civil War was won by the Union.  The goal of the ITC is to establish fitness and work-out programs in local communities that promote integration, and are open to all races. There is a need to reclaim the abolition roots of the Republican Party, promote Civil Rights, and establish an all inclusive atmosphere in our two party system.

I could not think of any organization that promotes and practices integration, other than the Democratic party.  Then I saw the news item about the efforts of three mixed-race men to register blacks to vote, and being murdered because they shared the same car. This car needs to be resurrected and driven on all our highways. The Turners and Forty-Eighters went into the South and forced the defeated Confederates to register blacks. With the coming destruction of the Republican party by a racist lunatic, moderate Republicans can look to the ITC for sanity, for real platforms, and constructive acceptance. Let us end the hideous stand-off, and move our nation into a new modern era.

America needs to excercise on a community level. Neighbors need to interact with neighbors in a simple manner.

JACKSON, Miss. (WJTV) – The investigation into the murders of three civil rights volunteers has ended after 52 years.

Attorney General Hood announced there are no more criminal charges in the “Mississippi Burning” case.

The murders occurred in 1964 in Neshoba County.

The bodies of the men were discovered 44 days later.

Chaney, Goodman, and Schwerner were in the area working to register African-American voters.

One man pleaded guilty and seven others were tried and convicted of federal civil rights violations related to the murders in 1967.

The U.S. Department of Justice presented its findings about the “Mississippi Burning” case to Attorney General Hood; he determined there were no other viable prosecutions in the case or related cases.

Attorney General Hood announced the most recent development in the case was about 18 months ago.

However, the witness backed out after pledging to sign a “sworn statement that would have implicated a suspect”.

The relatives of the victims have been made aware of the decision to close the case.

A German gymnastic movement was started by Turnvater (“father of gymnastics”) Friedrich Ludwig Jahn in the early 19th century when Germany was occupied by Napoleon. The Turnvereine (“gymnastic unions”) were not only athletic, but also political, reflecting their origin in similar “nationalistic gymnastic” organizations in Europe. The Turner movement in Germany was generally liberal in nature, and many Turners took part in the Revolution of 1848.[1]

Given the radicalization of the movement in the 1840s, it is not surprising that the German gymnasts were directly involved in the 1848 revolutions. Turnverein leaders won renown for their leading roles in local uprisings

Although a proposal to form a “Gymnastic Army” (Turnerschar) to supplement the National Guard was never realized, gymnasts manned barricades and participated in crucial fighting during the revolutions.

The Forty-Eighters were Europeans who participated in or supported the revolutions of 1848 that swept Europe. In the German states, the Forty-Eighters favored unification of the German people, a more democratic government, and guarantees of human rights.[1] Disappointed at the failure of the revolution to bring about the reform of the system of government in Germany or the Austrian Empire and sometimes on the government’s wanted list because of their involvement in the revolution, they gave up their old lives to try again abroad. Many emigrated to the United States, England, and Australia after the revolutions failed. These emigrants included Germans, Czechs, Hungarians, and others. Many were respected and politically active, wealthy, and well-educated; as such, they were not typical immigrants. A large number went on to be very successful in their new k

After being advised by Bernhard Eunom Philippi among others, Karl Anwandter emigrated to Chile following the failed revolution. In 1850 he settled in Valdivia.[2] He was joined there by numerous other German immigrants of the period. 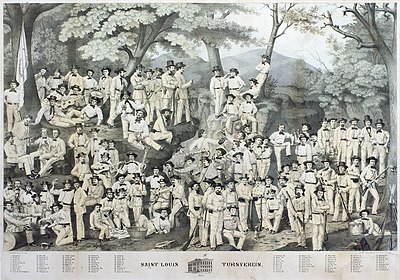 Galveston, Texas was a port of entry to many Forty-Eighters. Some settled there and in Houston, but many settled in the Texas Hill Country in the vicinity of Fredericksburg. Due to their liberal ideals, they strongly opposed Texas‘s secession in 1861. In the Bellville area of Austin County, another destination for Forty-Eighters, the German precincts voted decisively against the secession ordinance.[3]

More than 30,000 Forty-Eighters settled in what became called the Over-the-Rhine neighborhood of Cincinnati, Ohio. There they helped define the distinct German culture of the neighborhood, but in some cases also brought a rebellious nature with them from Germany. Cincinnati was the southern terminus of the Miami and Erie canal, and large numbers of emigrants from modern Germany, beginning with the Forty-Eighters, followed the canal north to settle available land in western Ohio.

In the Cincinnati Riot of 1853, in which one demonstrator was killed, Forty-Eighters violently protested the visit of the papal emissary Cardinal Gaetano Bedini, who had repressed revolutionaries in the Papal States in 1849.[4] Protests took place also in 1854, Forty-Eighters were held responsible for the killing of two law enforcement officers in the two events.[5]

Many German Forty-Eighters settled in Milwaukee, Wisconsin, helping solidify that city’s progressive political bent and cultural Deutschtum. The Acht-und-vierzigersand their descendants contributed to the development of that city’s long Socialist political tradition.[6] Others settled throughout the state

Many were members of the Turner movement.

The Radical Republicans opposed Lincoln’s terms for reuniting the United States during Reconstruction, which began in 1863, which they viewed as too lenient. They proposed an “ironclad oath” that would prevent anyone who supported the Confederacy from voting in Southern elections; Lincoln blocked it. Radicals passed theWade-Davis Bill in 1864; Lincoln vetoed it. The Radicals demanded a more aggressive prosecution of the war, a faster end to slavery and total destruction of the Confederacy. After the war the Radicals controlled the Joint Committee on Reconstruction.

The Radical Republicans led the Reconstruction of the South. All Republican factions supported Ulysses S. Grant for president in 1868. Once in office, Grant forced Sumner out of the party. Grant used Federal power to try to break up theKu Klux Klan organization. Insurgents, however, and community riots continued harassment and violence against African Americans and their allies into the early 20th century

Muscular Judaism (German: Muskeljudentum) is a term coined by Max Nordau in his speech at the Second Zionist Congressheld in Basel on August 28, 1898. In his speech he spoke about the need to design the “new Jew” and reject the “old Jew“, with the mental and physical strength to achieve the goals of Zionism. Nordau saw Muscular Judaism as an answer to Judennot(“Jewish distress“).[1]

The term refers to the cultivation of mental and physical properties, such as mental and physical strengths, agility and discipline, which all will be necessary for the national revival of the Jewish people. The characteristics of the muscular Jews are the exact opposite, an antithesis, of the Diaspora Jew, especially in Eastern Europe, as shown in the anti-Semitic literature and in theHaskalah movement’s literature. Nordau saw the promotion of muscular, athletic Jews as a counterpoint to such depictions of Jews as a weak people.[2] In addition, the muscle Jew is the opposite of the rabbinic or Haskalah Jew, the man of letters, the intellectual, who was said to be busy all his life leaning on his books and engaging in esoteric subjects, and therefore he doesn’t possess much strength and his muscles are weak.

Though Muscular Judaism was an idea practiced mostly by male Jews, Jewish women participated as well, especially in activities such as gymnastics.[3]

1 Response to The Integrated Turner Community